On 10 October 2018 we announced the winners of the Department’s postgraduate prizes at an evening reception.

Staff and students gathered to recognise the research achievements of PhD students through the Janet Watson Memorial Prizes and the John S Archer Award. 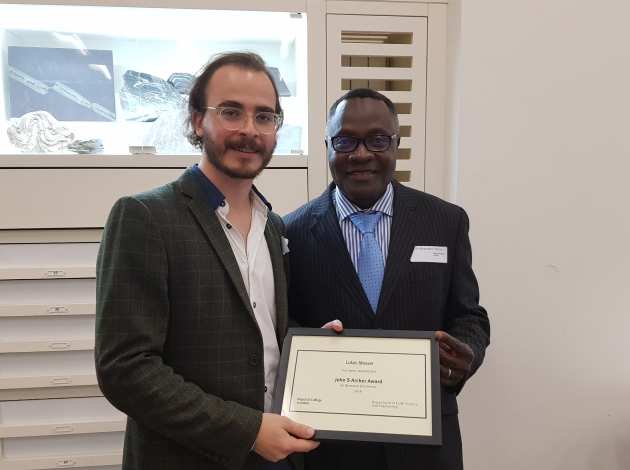 The winner of the 2018 John S Archer Award is Lukas Mosser. Lukas’s PhD project was to work on the geostatistical modelling of porous media at the micron-scale. Lukas proposed to test an alternative approach based on an emerging Deep Learning technology known as Generative Adversarial Network (GANs) – the first time GANs had been applied to geoscience topics .Lukas’ work, in less than two years, has brought game-changing applications to geological modelling.

Dr Alex Folefac, one of the group of ten who set up the John Archer Fund, presented the award, saying of Prof John Archer, that “it wasn’t just about research, teaching was very much at the core of his legacy here”.

Dr Folefac went on to say how impressed he was at how the science has moved on in the field of petroleum engineering since his time here as a researcher.

The annual Janet Watson Memorial Prize rewards a PhD student for research excellence and good citizenship in the Department of Earth Science and Engineering. Professor Janet Watson was a British geologist and alumna of Imperial College London.

Among the nominations for the Janet Watson Memorial Prizes was a range of excellent research that highlights the diversity of research areas in the Department, including mineral chemistry, seismology, numerical modelling and geomechanics. The candidates’ research has applications in industry, on Earth and on Mars, and even in medicine, and their impressive contributions to the department include supporting students in the undergraduate programme, coordinating events and participating in committees. The winner of the 2018 Janet Watson Prize for research is Oscar Calderon Agudo, who started his  PhD in geophysical full-waveform inversion, then switched his attention to medical imaging, adapting geophysical techniques to invert in-vivo ultrasound data, resolving tumours in the breast more readily than is possible using conventional methods.

The winner of the Janet Watson Prize for citizenship is Stephen Watkins, who is completing an interdisciplinary source-to-sink PhD project and whose research has fundamental implications for how the stratigraphic record develops. Stephen’s contribution to the department includes using his exceptional field and people skills to lead student groups on a number of undergraduate field trips, and arrange the successful Basins Research Group seminar series and has

The Janet Watson prize winners were presented with a certificate and will each receive £1,000. Congratulations to our winners, to all candidates and thanks to their nominators for drawing attention to the students’ excellent work

With many thanks to the support from our alumni for the John S Archer Fund.