Your genome in minutes: New technology could slash sequencing time

Scientists from Imperial College London are developing technology that could ultimately sequence a person’s genome in mere minutes, at a fraction of the cost of current commercial techniques.

The researchers have patented an early prototype technology that they believe could lead to an ultrafast commercial DNA sequencing tool within ten years. Their work is described in a study published this month in the journal Nano Letters and it is supported by the Wellcome Trust Translational Award and the Corrigan Foundation.

The research suggests that scientists could eventually sequence an entire genome in a single lab procedure, whereas at present it can only be sequenced after being broken into pieces in a highly complex and time-consuming process. Fast and inexpensive genome sequencing could allow ordinary people to unlock the secrets of their own DNA, revealing their personal susceptibility to diseases such as Alzheimer's, diabetes and cancer. Medical professionals are already using genome sequencing to understand population-wide health issues and research ways to tailor individualised treatments or preventions.

Dr Joshua Edel, one of the authors on the study from the Department of Chemistry at Imperial College London, said: "Compared with current technology, this device could lead to much cheaper sequencing: just a few dollars, compared with $1m to sequence an entire genome in 2007. We haven't tried it on a whole genome yet but our initial experiments suggest that you could theoretically do a complete scan of the 3,165 million bases in the human genome within minutes, providing huge benefits for medical tests, or DNA profiles for police and security work. It should be significantly faster and more reliable, and would be easy to scale up to create a device with the capacity to read up to 10 million bases per second, versus the typical 10 bases per second you get with the present day single molecule real-time techniques." 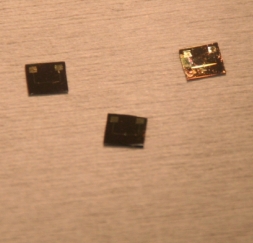 In the new study, the researchers demonstrated that it is possible to propel a DNA strand at high speed through a tiny 50 nanometre (nm) hole - or nanopore - cut in a silicon chip, using an electrical charge. As the strand emerges from the back of the chip, its coding sequence (bases A, C, T or G) is read by a 'tunnelling electrode junction'. This 2 nm gap between two wires supports an electrical current that interacts with the distinct electrical signal from each base code. A powerful computer can then interpret the base code’s  signal to construct the genome sequence, making it possible to combine all these well-documented techniques for the first time.

Sequencing using nanopores has long been considered the next big development for DNA technology, thanks to its potential for high speed and high-capacity sequencing. However, designs for an accurate and fast reader have not been demonstrated until now.

Co-author Dr Emanuele Instuli, from the Department of Chemistry at Imperial College London, explained the challenges they faced in this research: "Getting the DNA strand through the nanopore is a bit like sucking up spaghetti. Until now it has been difficult to precisely align the junction and the nanopore. Furthermore, engineering the electrode wires with such dimensions approaches the atomic scale and is effectively at the limit of existing instrumentation. However in this experiment we were able to make two tiny platinum wires into an electrode junction with a gap sufficiently small to allow the electron current to flow between them."

This technology would have several distinct advantages over current techniques, according to co-author, Aleksandar Ivanov from the Department of Chemistry at Imperial College London: "Nanopore sequencing would be a fast, simple procedure, unlike available commercial methods, which require time-consuming and destructive chemical processes to break down and replicate small sections of the DNA molecules to determine their sequence. Additionally, these silicon chips are incredibly durable compared with some of the more delicate materials currently used. They can be handled, washed and reused many times over without degrading their performance."

Dr Tim Albrecht, another author on the study, from the Department of Chemistry at Imperial College London, says: "The next step will be to differentiate between different DNA samples and, ultimately, between individual bases within the DNA strand (ie true sequencing). I think we know the way forward, but it is a challenging project and we have to make many more incremental steps before our vision can be realised."

1. "DNA Tunneling Detector Embedded in a Nanopore." As published in Nano Letters, December 2010. For a full list of authors please refer to the paper. For a copy of the paper please visit: http://pubs.acs.org/doi/abs/10.1021/nl103873a

Since its foundation in 1907, Imperial's contributi ons to society have included the discovery of penicillin, the development of holography and the foundations of fib re optics. This commitment to the application of research for the benefit of all continues today, with current focuses including interdisciplinary collaborations to improve global health, tackle climate change, develop sustainable sources of energy and address security challenges.

In 2007, Imperia l College London and Imperial College Healthcare NHS Trust formed the UK's first Academic Health S cience Centre. This unique partnership aims to improve the quality of life of patients and populations by taking new discoveries and translating them into new therapies as quickly as possible.

The Wellcome Trust is a global charitable foundation dedicated to achieving extraordinary improvements in human and animal health. It supports the brightest minds in biomedical research and the medical humanities. The Trust's breadth of support includes public engagement, education and the application of research to improve health. It is independent of both political and commercial interests.