In Spring 2009 the OPAL National Soil and Earthworm Survey was launched. The survey aimed to investigate and characterise soils in various parts of the country, and to understand how changes in soil characteristics and properties affect it's ability to sustain life. Soil is subject to pollution from many of the same sources as water and air, but much less is known about soil quality. Earthworms have been chosen to be investigated as indicators of changes in soil, given their natural abundance and role in processing soil and the organic matter it contains.

The survey hopes to build up a picture of soil quality and earthworm distribution all over England. Anyone can get involved, from all ages, abilities and backgrounds, and anywhere with soils will do. Back gardens, school playing fields and local parks are just a few suggestions of places to take part. There is no official end date to the survey so please get involved at any time.

In total 40,000 field packs were distributed to individuals across England.

The OPAL Soil and Earthworm survey was conceived to be one of the 5 national OPAL surveys, each one to be designed and implemented by a 'national centre'. The idea was that each of the surveys would focus on some elemental aspect of the environment, which collectively could provide a picture on the state of the English natural environment. When considering soil, some questions become obvious. What is the condition of soils across the country? Is there a variation in soil 'quality' across the country? Is this quality changing, and if so, why? What is the effect of soil condition on the organisms that live within the soil? What are the general consequences of changes in soil quality? What are the effects of human activity on soil and its organisms? How can we best monitor soil quality? Is there anything we can do to relieve pressures on soil from human activity? etc...

The list of possible questions is vast, and most of these lie outside of the scope and resources made available to this project. However, it was felt that useful information could be derived from a public survey that if carefully designed, could also be of major benefit and enjoyment to members of the public who might otherwise not have an opportunity to become involved in an activity of this type. It was also hoped to get more people outdoors, not to just enjoy our natural environment but also to achieve a better appreciation of it.

Given the importance of earthworms to soil quality, they were felt to be ideal creatures to which the quality of soil could be compared. There are some inherent parameters that affect earthworm species and their distributions, soil pH being one of the most important, although moisture levels, temperature and organic/mineral content also exercise control over their ability to live in soil. It was therefore felt that a survey that attempted to investigate earthworm distributions and their most closely associated soil condition parameters would provide a unique and novel way by which the importance of soil to human existence could be highlighted. The Soil Centre therefore set a number of objectives to be achieved in the creation of the survey and its ability to enage with members of the general public. These were to:

Once a participant had completed the survey, it was also planned that the data collected could be uploaded to a central website. This would serve several purposes.

The Soil Centre was actively involved in the development of the OPAL web portal, being the first of the national surveys to go live.

Development of the national survey field packs commenced with the appointment of the project's Community Support Scientist and Centre Manager, Dr Martin Head, in April 2008. Initial versions of the guide were developed in-house using standard publication tools, so that modifications and improvements could be trialled locally. At this stage the FSC were not involved in design of the survey, as the Soil Centre wished to concentrate on content deemed appropriate to the survey and the over-arching objectives of the project.

Several pilot tests of the guide were carried out, during the period May 2008 to November 2008. Following this, final design of the survey was done working closely with the FSC and its design team, to make sure that the survey pack and its contents conformed to the requirements laid out for the delivery of the survey. Design aspects considered included:

In addition to this, the soil centre worked carefully on the way that questions were phrased and how they linked to each other. In fact, the overall structure of the survey questionnaire was designed to provide a first control on the quality of the data being entered by participants, such that anomolous responses could be flagged for investigation and possible exclusion from later statistical analysis of submitted data.

Field packs are comprised of several components listed as follows;

The workbook also contains information regarding most aspects of how to prepare to do a survey, additional equipment lists, and information about the earthwom species included into the guide and habitats. There are also instructions for how to upload results once the survey has been completed.

The soil and earthworm survey went 'live' in March 2009. For the first 3 months it was supported by the OPAL soil centre through promotional activties and events. During launch week TV and radio media coverage took place, with the survey featured on the BBC's primetime show 'The One Show', where guest presenter Dr George McGavin was featured guiding a group of school children through the survey. In addition to this, soil centre staff were also interviewed on BBC breakfast radio. Dr Emma Sherlock and Dr Martin Head spoke to over a dozen regional BBC radio stations, and were asked all manner of questions ranging from the usual "...if you cut a worm in half, do you get two worms?" to "How many species are there in the British Isles?". The full list of BBC radio stations that Emma and Martin appeared on (23rd March 2009) was as follows;

Several launch week events were organised, the main two being a photo call in Hyde Park and an exhibition in the main concourse of Imperial College's Mechanical Engineering Building (home to the CEP).

Following the launch of the survey and running of the launch events programme, the soil centre also helped to create a useful list of additional information to support people who had not received one of the original packs, but who were still able to download the survey guide and workbook from the website. This pack provides a range of advice and ideas for carrying out the soil and earthworm survey, also with groups, and includes:

We also put together a list of our project suppliers so that participants are able to source their own consumables etc. in the event that they wanted to continue to complete the survey and upload additional information.

Both the support pack and the supplier guide are available from the OPAL main website here:

The design of the OPAL web portal, which is a facility designed to host all information across the OPAL project's portfolio, is the primary responsibility of the Natural History Museum. The museum employs a web-design team who are dedicated to designing and developing the web portal, and have created a series of tools, information archives, and links to many other useful resources. Members of the Soil Centre were actively involved in the early design process, and helped the design team to devise and set up the national database, which would be used to collate not only the soil and earthworm survey data, but all other subsequent project data. 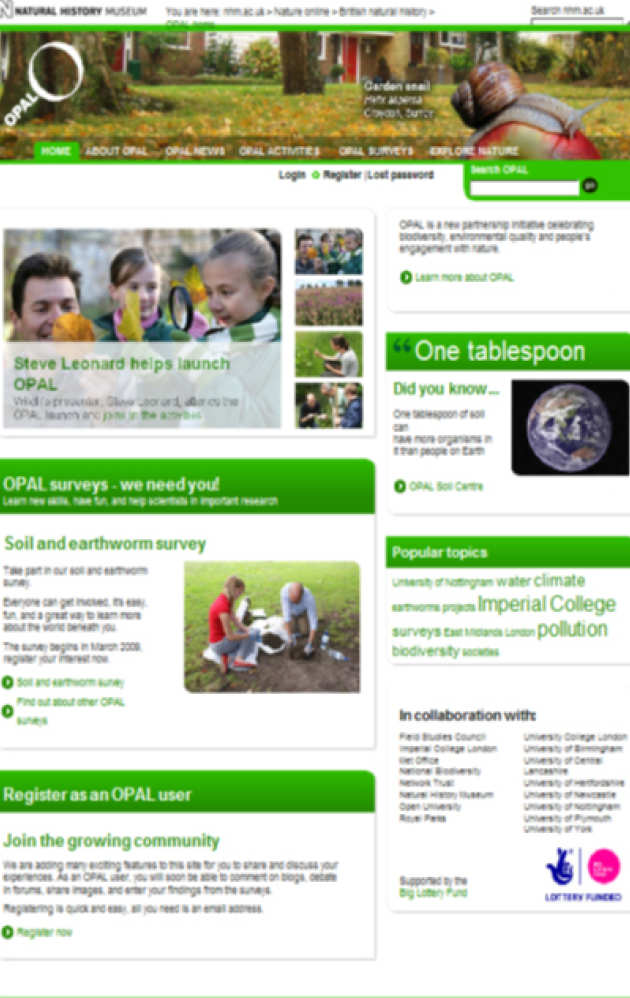 This image shows an early version of the OPAL web-portal, with the soil and earthworm survey prominantly displayed (being the only survey under development at the time). SInce then the majority of the other OPAL projects have also been included on the website.

Within the project pages of the website, we have created a set of tools that allow survey information uploaded by participants to be displayed on Google maps. There are also another set of tools that feedback with graphs and charts, which are shown below. 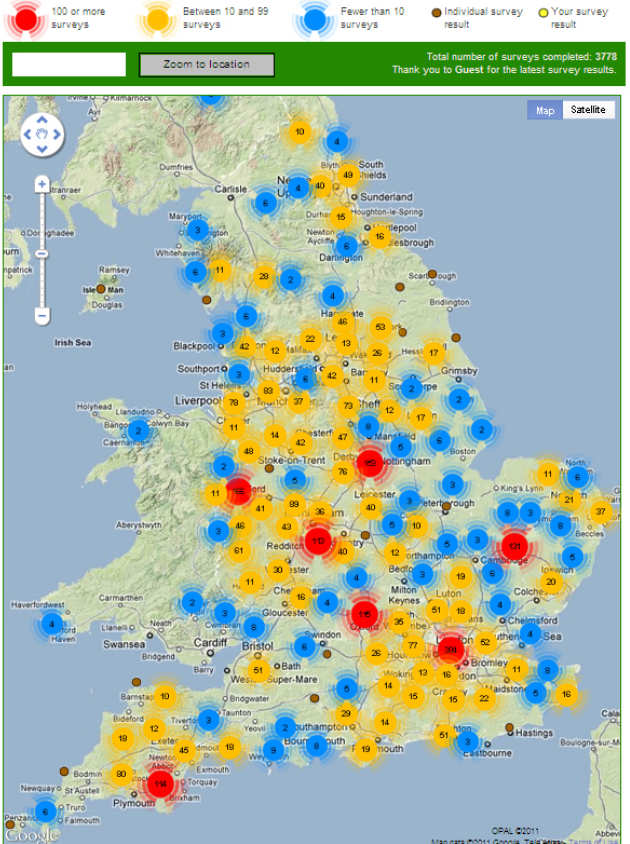 This is the primary results map, which shows the distribution of surveys around the country. This image was captured on 24th August 2011, and shows that at that time, 3778 surveys had been completed and uploaded to the website. Density colour icons are used to differentiate area of differing survey submission density. 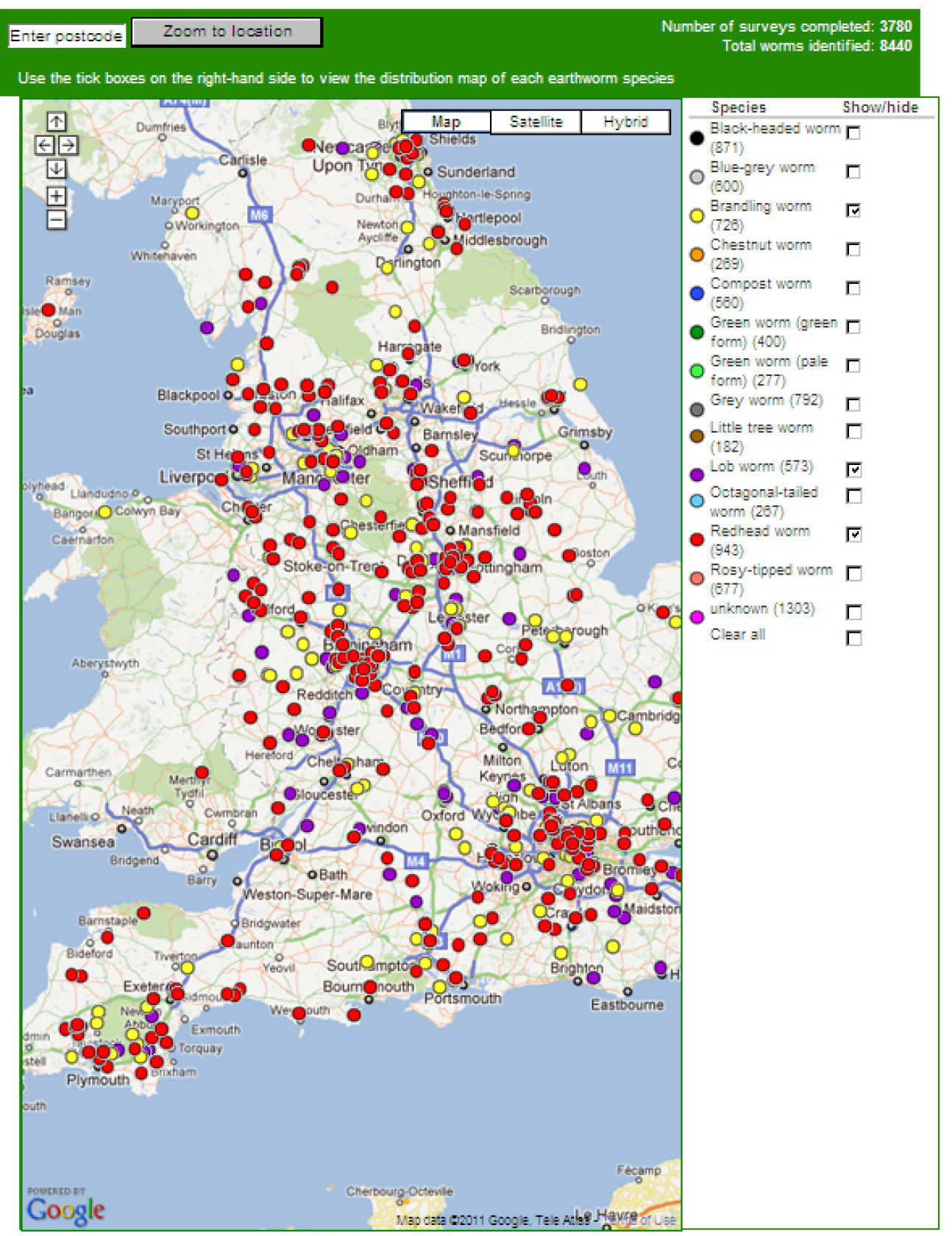 This map is designed to allow users to select individual species of earthworms, which are then displayed using coloured dots for each species.

In both of these maps, users are able to locate their own data and compare it to others nearby or further away. In addition, each survey location is able to display the attributes recorded from that location, in a series of tabs. This is achieved by simply clicking on any location on the map. Both maps are fully zoomable and can be viewed in the full range of Google map views. 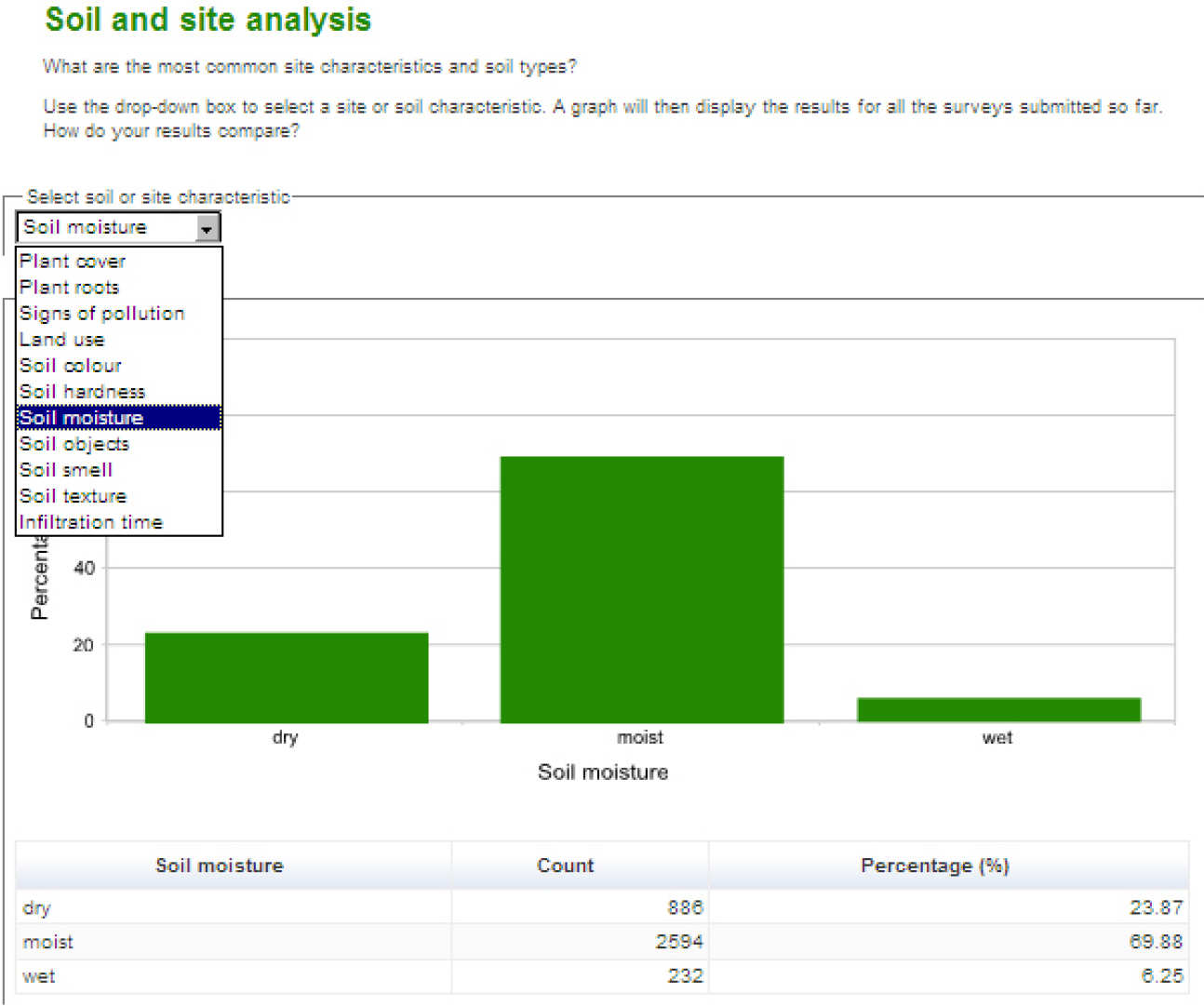 This next image shows a presentation of one of the measured soil characteristics- the estimated level of moisture of the soil. The other soil characteristics can be selected from the drop down menu shown on the image. The charts are real-time and are updated as soon as a new record is uploaded to the website. This has allowed the soil centre staff to monitor data submitted before carrying out advanced analysis on the dataset. 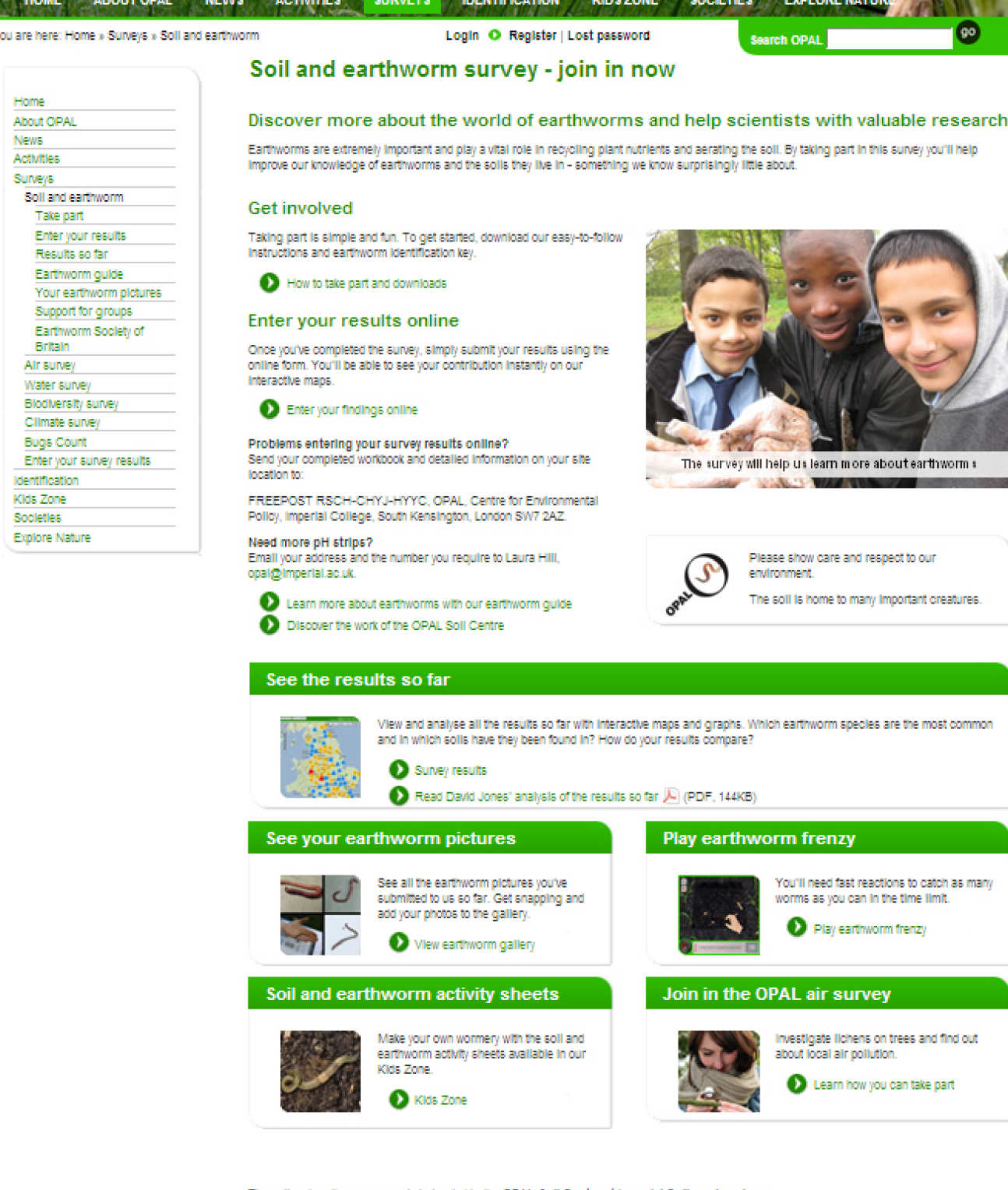 This final image shows the main project page for the soils project on the OPAL web-portal. From here participants and users can browse and access data submission pages, survey support pages and other information compiled by the soil centre and our collaborators. There is also a section where much of the survey documentation can be downloaded and printed locally, and we have included a training section, which contains step by step instructions (documents and videos) on how to prepare for, complete, and submit the survey. This was prepared particularly with teachers and group leaders in mind.