Fluorescence-based techniques can be used for single point measurements of homogeneous samples, for example in fluorometers that measure the properties of solutions in cuvettes or in optical fibre-based probes, or fluorescence contrast can be exploited for imaging in microscopes, endoscopes or tomographic imaging instrumentation. The fluorescence signal can be characterised with respect to excitation and emission wavelength, fluorescence lifetime and polarisation.  The wavelength of the fluorescence is widely used to distinguish between different molecules in a sample and the efficiency of the fluorescence process can be studied to provide information about the local environment of the fluorescent molecules (fluorophores) and therefore of the proteins to which they are attached. The latter is usually parameterised by the quantum efficiency, h, which is the probability that an absorbed photon will result in an emitted fluorescence photon. This can vary according to how the fluorophore environment affects the radiative decay rate, Γ, which is generally a function of the electronic energy level structure of the fluorophore, and the non-radiative decay rate, k, which is a function of interactions of the fluorophore molecules with their local environment. For some fluorophores Γ andkare sensitive to chemical environmental parameters, such as pH or calcium ion concentration, or to physical factors such as the viscosity or temperature. 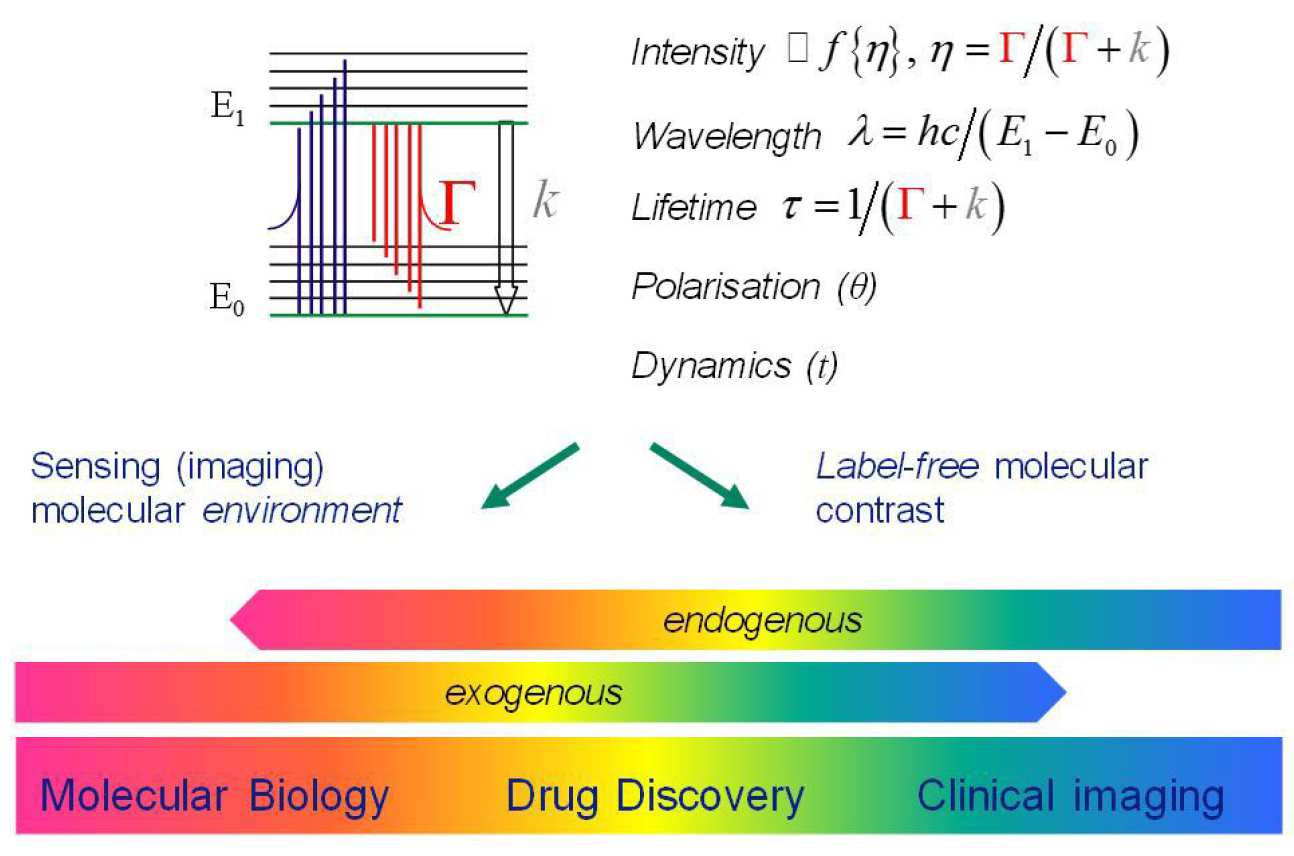 There is an increasing trend to map such spectroscopic measurements of fluorescence in microscopes to realise multidimensional fluorescence imaging (MDFI), resolving fluorescence with respect to parameters such as excitation and emission wavelength, lifetime and polarisation as well as two or three spatial dimensions and elapsed time.  Such high content imaging has been enabled by the progress in laser and photonics technology, including robust tunable and ultrafast laser excitation sources, relatively low-cost high speed detection electronics and high performance imaging detectors. The multidimensional data sets can be very large and increasingly advanced software tools and powerful computers are required to extract useful information from this data.