The optical microscope is one of the most widespread biophotonics tools and has allowed researchers to study biological processes down to the cellular level since the cell was first described by Robert Hooke in 1632. Indeed, for much biological research, “microscopy” has become almost synonymous with “imaging”, although many concepts developed for microscopy are being translated to optical imaging at larger scales.  Today there is tremendous progress extending the limits of optical imaging in terms of spatial and temporal resolution and with respect to the functional content that optical images can provide. Increasingly these approaches are being applied to high throughput automated imaging for drug discovery and systems biology and to in vivo imaging for preclinical and clinical research. For studies of disease mechanisms, microscopy is increasingly evolving from imaging thin layers of cells on a coverslip to studies of 3-D cell cultures, which provide a better representation of the in vivo context, and to imaging of cellular processes in live organisms – from worms and fruit flies to humans.

Because fluorescence consists of photons at a longer wavelength than the excitation radiation, the fluorescence signal can be easily separated from the excitation light using a beamsplitter and/or filters. Unlike other forms of microscopy that utilise reflected or scattered light, this means that very weak fluorescence signals – down to a single photon – can be detected. In turn, this means that a single fluorescent tag can be imaged – enabling visualisation of the distribution of individual biological molecules. The figure shows the most common form of fluorescence microscope where excitation light is reflected by a dichroic beamsplitter and illuminates the field of view to produce fluorescence at a wavelength that is transmitted by the dichroic beamsplitter. The fluorescence image is formed by the action of the two lenses, known as the objective lens, which captures the light from the sample, and the tube lens that forms a real image at the camera. This configuration is called an infinity-corrected microscope because the rays of light emitted from a sample in the focal plane of the objective lens are parallel after being collected by this lens. The magnification of the microscope is given by the ratio of the focal length of these lenses: fT/fO. The best possible (transverse) spatial resolution of this microscope is given by ~λem/(2 NA) where λem is the wavelength of the fluorescence emission and NA is the numerical aperture of the objective lens, which is given by NA = n sinθ where n is the refractive index of the medium between the lens and the sample and θ is the maximum angle from the optical axis with which light can be collected by the objective lens. This formula was presented by Ernst Abbe in 1873 and represents the diffraction-limited performance that is limited by the ability of a microscope to capture the light waves being emitted from or scattered by an object. A common way to think about spatial resolution is in terms of an imaging instrument’s point spread function (PSF), which is the image of an infinitely small object. In practice, this could be the image of a single fluorescent molecule.

Fluorescence microscopy has enjoyed a renaissance over the last decade, partly driven by advances in light source and detector technologies and partly due to advances in labelling technologies such as fluorescent proteins that can tag specific proteins of interest using genetic engineering. This can enable the labelled proteins to be visualised in living cells or organisms – and allow them and their dynamics to be studied in real time. By labelling different proteins with fluorophores emitting at different wavelengths, spectrally-resolved fluorescence images can be used to provide information about temporal and spatial colocalisation of the different labelled proteins, which can provide insights into molecular processes. Increasingly, however, fluorescence instrumentation aims to provide more information than just the distribution of specific fluorescent molecules.  Often fluorescence signals are analysed spectroscopically, e.g. in terms of excitation or emission wavelength, fluorescence lifetime or polarisation, to provide information on the local fluorophore environment, to study interactions of biomolecules and to distinguish different contributions from complex mixtures of fluorophores– as often occur in the autofluorescence of unlabelled biological tissue. 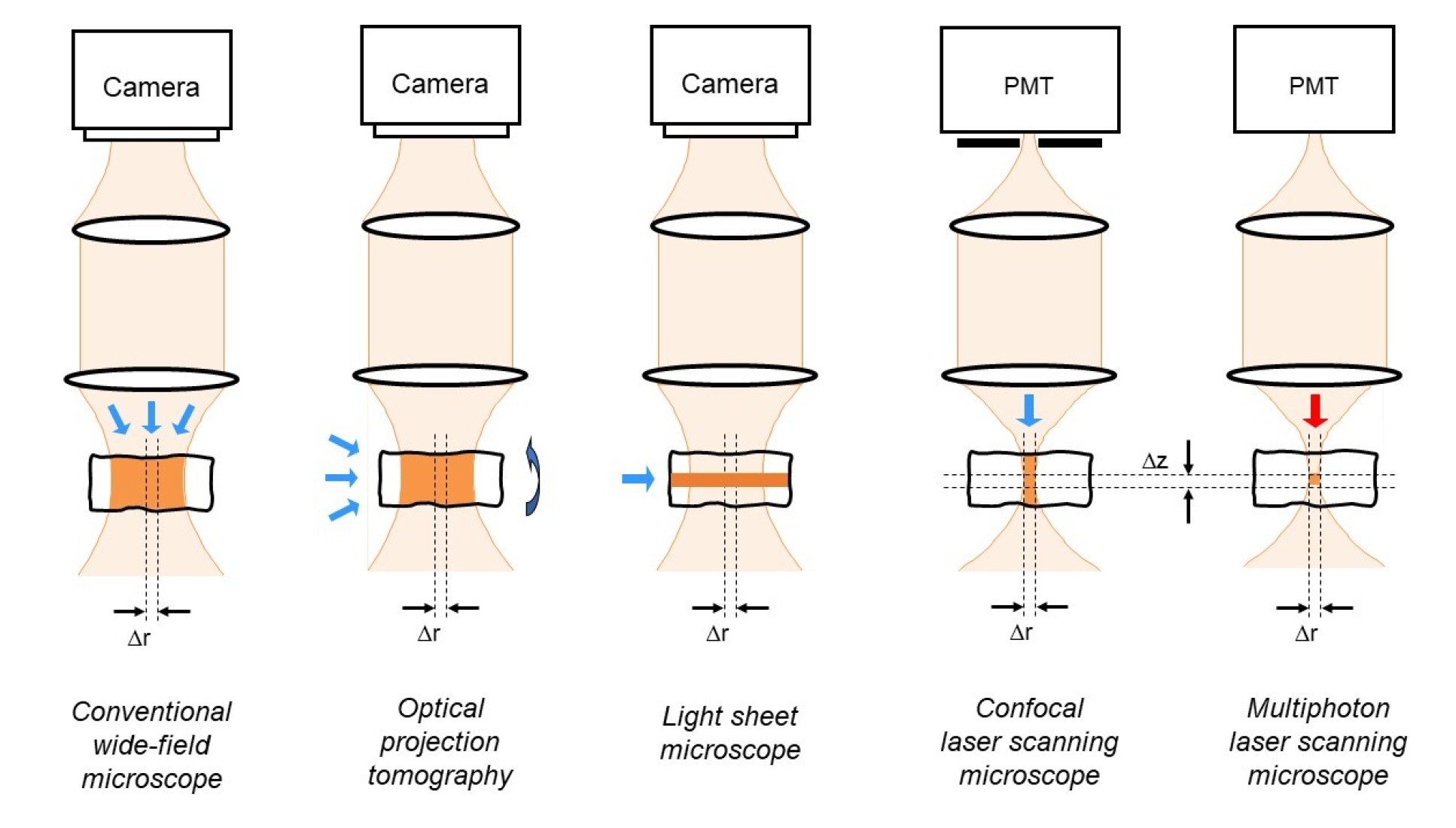