The Centre provides a focus for research activities in Inertial Confinement Fusion (ICF) and related High Energy Density Physics as well as exploring the use of Inertial Fusion for energy production.

We have strong collaborations with groups working on ICF in the US at Lawrence Livermore, Sandia and Los Alamos National Laboratories as well as the University of Rochester Laboratory for Laser Energetics and MIT. We also work closely on HEDP projects with groups in the UK at AWE Aldermaston, Rutherford Appleton Laboratory and the Universities of Oxford, York and Warwick

CIFS is also engaged in promoting the use of the Orion laser as a world class facility for fundamental scientific research through the Orion academic access programme.

NEWS - read about the announcement of results approaching Ignition on the National Ignition Facility on the BBC and Imperial College web sites.

Dr. Brian Appelbe
Research interests include inertial and magneto-inertial confinement fusion and the use of dense plasmas as a neutron source.

Colin Danson
Background in the construction & operation of ultra-high power Nd:glass lasers, including Vulcan and Orion. In his role as Plasma Physics Outreach and Academic Access Manager, Colin co-ordinates AWE's activities within CIFS.

Dr. Matthew Hill
Research interests include particle beam generation by laser-matter interactions and their use in generating and diagnosing high energy-density plasmas.

Kyle McLean
Research interests include probing the role of intense radiation fields in High Energy Density environments, such as those found in astrophysics and in ICF experiments. This involves a consideration of radiative transport and calculations of radiative opacity in environments of high temperatures and densities.

Sam O'Neill
Research interests include numerical modelling of ignition and burn in indirect drive ICF, with a particular interest in magnetically-assisted ICF.

Prof. Andrew Randewich
Background in magnetic fusion and space plasma physics. Andrew is Chief Scientist at AWE and formally Head of Plasma Physics where he focussed on high energy density physics and managing facilities such as the Orion laser and ASP neutron accelerator.

Dr. Christopher Walsh
Research interests include the effects of applied and self generated magnetic fields on heat transport and ignition in ICF hotspots.

As part of our research we collaborate with groups working on some of the largest experimental physics facilities in the world.
These include;

the Omega laser,
a 40KJ laser based at the University of Rochester, Laboratory for Laser Energetics, used for direct drive ICF and fundamental HEDP research

and the Orion laser facility,
a combined system of 10 long pulse and 2 peta-watt short pulse lasers used for defence science as well as academic research.

On August the 8th 2021, an experiment on the National Ignition Facility achieved a fusion yield of roughly 1.3 MJ. At this energy level, there are sufficient numbers of alpha particles from fusion reactions to significantly raise the plasma temperature giving rise to higher fusion reaction rates. This is start of the 'ignition' process which substantially amplifies the fusion energy produced.

Further details of this result can be found in a number of news articles, including those on the BBC and Imperial College web sites.

In 2017 the National Ignition Facility achieved its highest performance experiment, yielding 1.9x1016 neutrons (corresponding to 54kJ of fusion energy). This sees the fusion energy exceed the kinetic energy of the imploding shell for the first time. Nonetheless, large gains are still required for the fusion energy to exceed the energy put into the experiment by the 1.8MJ laser. The fuel self-heating is now thought to be larger than the heating from external sources, suggesting that the experiments are close to the 'ignition cliff', where small improvements in implosion quality can give large increases in performance.

The recent improvements are largely down to a change in ablator material from plastic to high-density carbon, which allows more energy to be coupled from the laser to the capsule without increasing the damaging drive asymmetry. More information can be found in Sebastien Le Pape's June 2018 paper published in Physical Review Letters.

Set the controls for the heart of the Sun 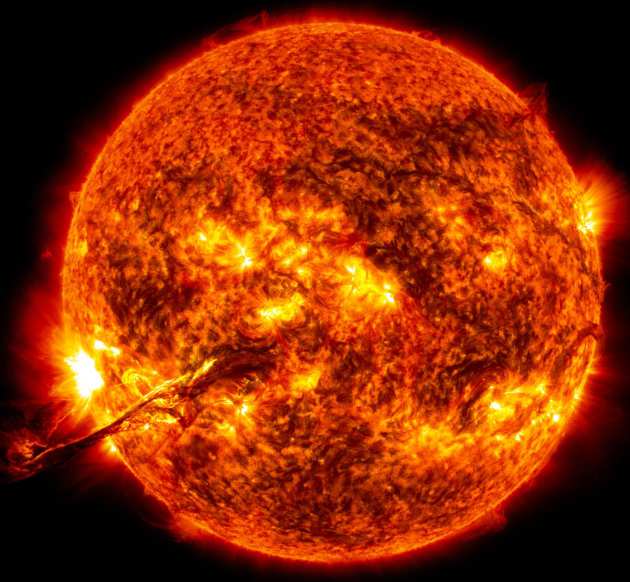 Scientists from the Centre for Inertial Fusion Studies exhibited their research at the Royal Society's Summer Science Exhibition 2014 in London. The exhibit was called Set the controls for the heart of the Sun, and explained our work on recreating the conditions inside stars in the laboratory. The event provided the opportunity to meet, and informally chat with, scientists from CIFS, as well as from other cutting edge research projects around the UK.

What was the exhibit about?
Using one of the world’s newest and most powerful lasers, the Orion laser at AWE Aldermaston, researchers are close to being able to recreate the conditions inside the core of the Sun. A combination of laser pulses, lasting for just a fraction of a second, is fired at an area 10,000 times smaller than a pin-head, producing temperatures of millions of degrees at more than ten times the density of water. These conditions are getting closer to the conditions in the centre of the Sun, and many other stars in the Universe. The experiments help us understand how energy is transported around the Sun.

To find out more about the work of CIFS in relation to fusion energy, watch  Thermonuclear fusion versus Murphy's Law - an Inaugural Lecture by Prof. Jeremy Chittenden.