This project investigates frontal photopolymerisation of polymeric materials, both theoretically and experimentally. The final goal of the project is to generate complex three-dimensional structures using simple materials and processes - usually, multifunctional monomers and planar lithography.

Photopolymerisation is a complex, nonlinear spatiotemporal process that results in nonuniform monomer-to-polymer conversion profiles orthogonal to the illuminated surface. However, in special circumstances, these conversion profiles may sharpen into stable planar polymerisation fronts that move as traveling waves, in the presence of strong optical attenuation and limited mass and heat transfer. This frontal aspect of the polymerisation process is particularly apparent in the photopolymerisation (and cross-linking) of thick material sections and has counterparts in degradation (including discoloration) processes in polymer films exposed to UV radiation.  FPP is a versatile method of polymer synthesis that is utilised in numerous applications, including dental and prosthetic materials, adhesives, coatings, and also in lithography.

The image below shows an array of large posts patterned using a layer of photoresist of constant thickness but varying light dose (a product of light intensity and exposure time). Clearly the height of the structure depends strongly on the UV dose but the surface of the structure is flat, as if a planar wave had stopped at a certain height when we cut the incident light.

We can describe (most relevant aspects of) the process with a simple model:

Writing two equations of motion for the order parameter (φ) - the 'conversion' fraction -  and the light intensity I. Note, however, that both φ and I and position and time dependent. The coupling of the equations gives rise to unexpected kinetics. An important asset of the model is that it relies exclusively on physical observables, including the attenuation coefficients μ0 and μ∞ and a single conversion rate K and solid threshold (analogous to a percolation threshold) φc; x and t are the depth (defining x=0 and the illuminated surface) and exposure time.

This minimal FPP model can describe the evolution of the front profile with remarkable accuracy, despite its simplicity. We have, in fact, validated the model by directly resolving the interfacial profiles and propagation kinetics during FPP using a thiol−ene model system.

Due to the complexity of the FPP process, the growth of the polymer solid can be influenced by a number of physical and chemical factors that are not considered in the above model.  Such factors include mass diffusion, heat generation, and the fact that photopolymerisation occurs via a sequence of chemical reactions. We are currently developing new models of FPP that capture additional physics and chemistry while remaining simple enough to produce results that can be used in practice. By studying these models, we have discovered novels ways of controlling the FPP process by, for example, varying the temperature and the optical properties of the photoresist. 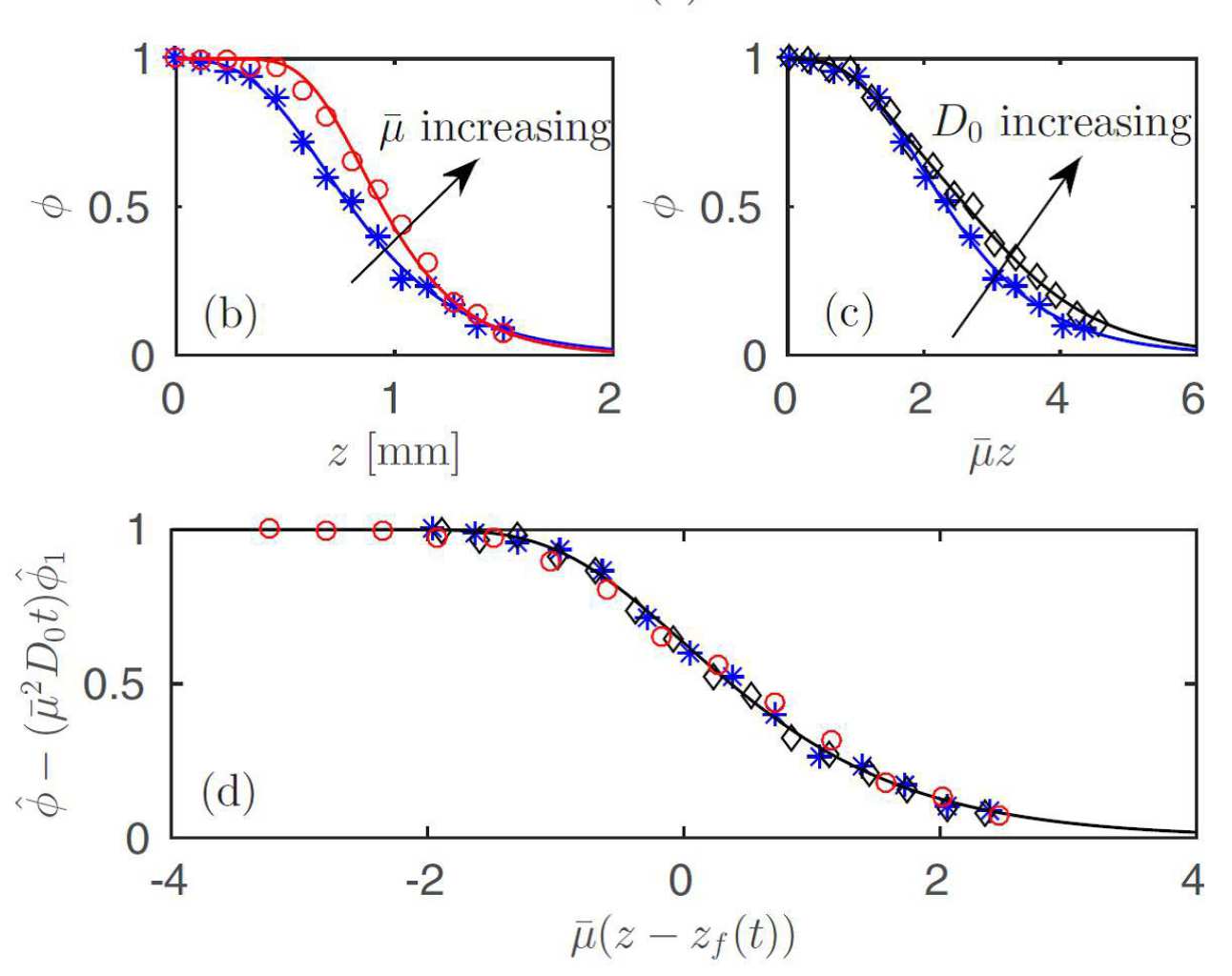 FPP can be used as general patterning strategy for the fabrication of polymeric structures with prescribed dimensions set by the illumination field. This approach holds for a range of radical photopolymerising systems, including thiol-ene and acrylic monomers. The factors governing the solidification process, including front position, profile shape and thermal effects, are explicitly investigated and quantified. We find the FPP process to be controlled by tuning selected photopolymerisation parameters, such as monomer chemistry, optical properties, time and intensity of irradiation, in a remarkably general and simple fashion.

FPP precisely defines the pattern thickness and enables multilevel patterning by light modulation, becoming ideally suited for a wide range of applications. After establishing the (generally highly nonlinear) kinetics of the process, we can use our predictive FPP approach to generate precisely controlled polymeric 3D structures, without resorting to complex multi-step lithographic processes.

FPP can also be used to fabricate polymeric microfluidic devices, made of multi-functional thiol-ene copolymers, which are compatible with an array of organic solvents. This is very important to handle, for example, polymers/surfactant solutions since most polymers are not water-soluble.