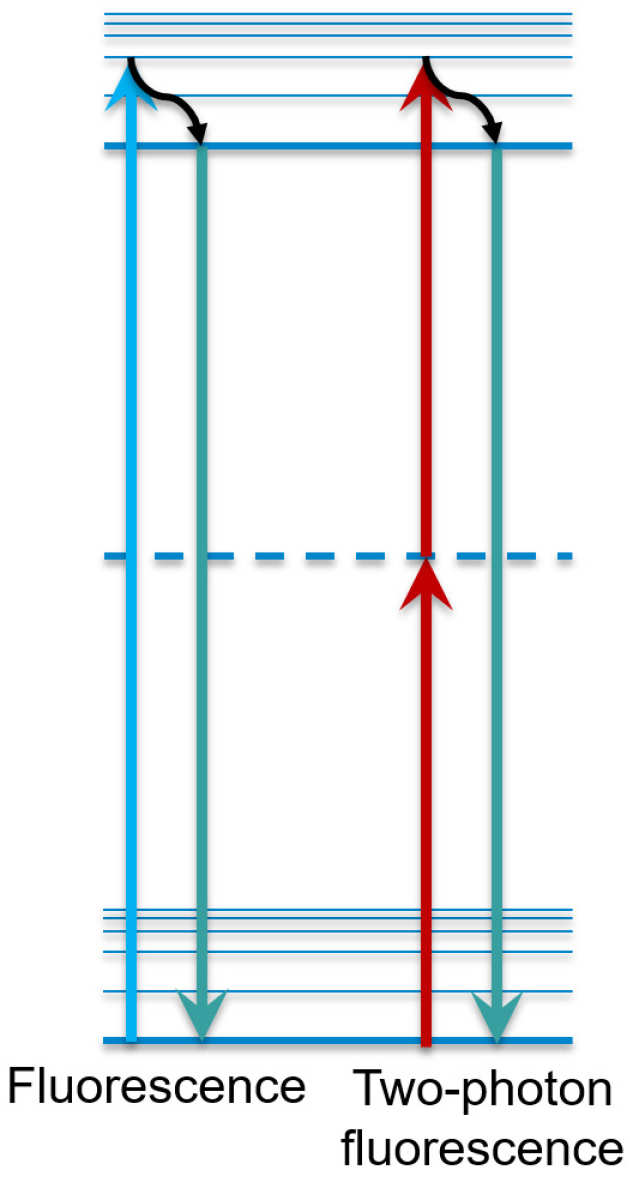 Multiphoton microscopy utilizes the phenomenon of multiphoton absorption of light. Ordinarily, for a molecule to absorb light, the energy of the absorbed photon must be equal or greater to the 'band gap' of the molecule. Nomatter how many low-energy photons strike the molecule, none will be absorbed because they don't have a high enough energy. However, as the photon flux increases, an interesting effect occurs; occasionally, two photons are absorbed at exactly the same time, their combined energies sufficient to bridge the energy gap. The result is that molecules such as fluorophores can be excited by the photons, but only if the flux is high enough. They can then fluoresce at their normal wavelengths, usually in the visible region of the electromagnetic spectrum.

Multiphoton microscopes require expensive high-power ultrafast lasers in order to generate the necessary photon flux. The laser is focussed to a very small point using a microscope objective, and the point is raster scanned across the sample using a pair of scan mirrors. Fluorescence from the excitated molecules can then be measured, by reflection off a dichroic mirror followed by detection using a photomultiplier tube.

Ordinarily, multiphoton microscopy is slow, because the system must image the sample point-by-point. An alternative approach, called temporal focusing, works by dispersing the ultrafast pulse using a grating. The light from the grating is then imaged onto the sample using a microscope, whereupon it creates a plane of illumination, a few microns thick. Above and below this plane, the excitation becomes negligible.

This phenomenon can be viewed in two, essentially identical, ways. The first way is to consider the grating purely as an array of tiny mirrors, each reflecting light from the laser onto the microscope's optical axis. Because the ultrafast pulse hits the grating at a shallow angle, the light takes a certain time to travel across the grating, so the effect is to create a very fast line-scanning multiphoton microscope. The second way to employ the time-bandwidth product; an ultrafast optical pulse is made up of a broad range of different wavelengths with a strong phase relationship. The light diffracted along the optical axis is dispersed into these wavelengths, the result being that at any point the components no longer arrive in phase so the pulse spreads out in time. At the focus, these components all are recombined in phase, yielding the ultrafast pulse once more.

Work by members of the group has included the development of temporal focusing instrumentation for photodynamic therapy, three-photon excitation (including three-photon optogentics) and high speed microscopy.

Photodynamic therapy is a treatment for cancer that involves giving a drug, or photosensitizer, which is toxic when exposed to light. The idea is that, rather than in normal chemotherapy where the drug acts on cells all over the body, the drug's effect can be targeted to a particular location by putting the patient in the dark for the duration of the treatment (normally a few hours) and only exposing certain regions of the body to light. Normally photodynamic therapy is performed using one-photon absorption - the treatment site is illuminated with an LED or lamp, and the treatment relies on the fact that the drug is more toxic to cancer cells than normal cells. In some cases though, that's not a strong enough guarantee - if the treatment site contains major nerves, or important tissue like part of the eye for example, targeting must be more precise.

In these situations, multiphoton photodynamic therapy would have a role. Multiphoton excitation can be targeted to a particular volume, so the treatment can be isolated to just the cancer cells. Without illumination, the drug in the normal cells is dormant and has no significant toxic effect. In this paper, we demonstrated this capability in cell culture, successfully patterning the cells with only a few seconds of exposure.

Because temporal focusing is highly parallelized, it is possible to image at very high speeds, performing things like particle tracking and motion correction which would be extremely difficult in conventional point-scanning multiphoton microscopy. Our paper demonstrating these capabilities will be released soon!