A mesoscale structural model of the femur is obtained through structural optimisation, via the iterative adaptation of a base randomised FE model subject to a loading regime derived from musculoskeletal simulations of the following activities: walking, stair ascent and descent, sit-to-stand and stand-to-sit.

The modelling framework is illustrated in Figure 1. Figure 2 shows a proximal slice in the optimised FE mesh obtained after adaptation compared to the base femoral FE mesh. 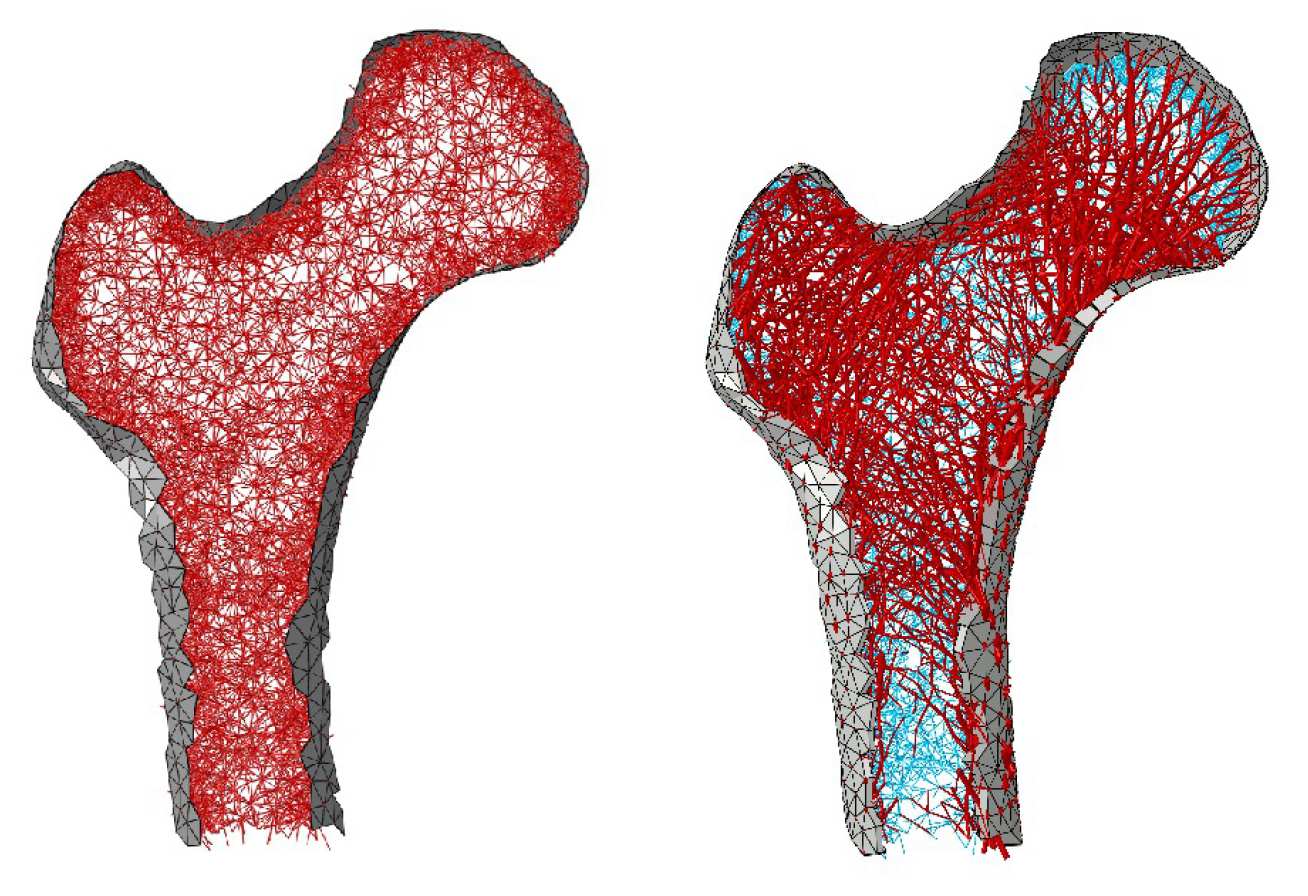 The main features characteristic of femoral inner structure are well predicted in the model: thick shaft cortex, distal distribution of trabecular bone, directionality of the proximal trabecular group (primary compressive, primary tensile, secondary compressive, secondary tensile, greater trochanter group), Ward’s triangle in the neck.  An important advantage of this model is its computational efficiency, with a running time of the order of one minute on a desktop computer for a simple load case.

Details on the optmisation pipeline and its results for the femur are published in Phillips et al. 2015 (International Biomechanics).

When applied to the tibia and fibula, the same modelling framework also yields a structure in agreement with clinical images.

A strain-rate and age-dependant damage elasto-plasticity material model for bone, for use in structural FE simulations, has been implemented which allows prediction of fracture onset and development, in both static and dynamic scenarios. Scenarios tested so far include longitudinal compression of the femur and fall to the side. Figure 1 shows a femoral fracture pattern in longitudinal compression scenario.

This model has been applied to the investigation of the impact of patient activity regime on fracture risk. The impact of bone outer morphology has also been investigated.

A microscale poroelastic model of a single trabecular element was generated. An optimisation algorithm driven by fluid flow velocity was implemented which allows prediction of single trabecula shape and orientation adaptation under loading.  This microscale modelling approach was used to design a surrogate model allowing prediction of trabecular cross-section and orientation in a structural model, effectively combining the accuracy of the microscale poroelastic model and the computational efficiency of the mesoscale structural model. Figure 1 shows the concept of this multi-scale modelling approach.

The surrogate model was used within a simple structural model of a proximal femur made of around 19,000 elements, submitted to a simplified set of loading cases, and was able to capture realignment of trabecular elements consistent with the main trabecular groups observed in the native femur (Figure 2). With a CPU time of 20 s to run a simple load case, this model has strong potential for an effective compromise between accuracy of bone structure representation and computational efficiency.

This project is focused on predicting injury occurence in a more efficient manner than using a traditionnal finite element model. In this macroscale beam model, the mesoscale model developed by the group is first used to predict the bone structure, but the bone is then assumed to consist of serially stacked beams of different cross sections taken at small intervals along the bone axis. The model has the same mechanical behaviour than a beam, and can deform in bending, torsion and axial tension/compression. Using MATLAB, a single load case simulation takes only 0.06 seconds, which makes this model a promising tool for quickly assessing fracture risk during blast.