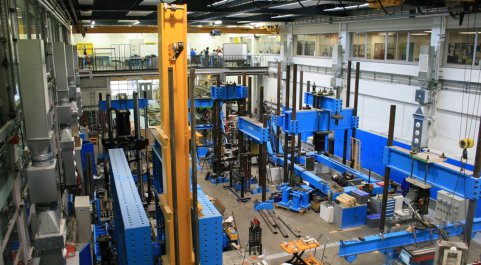 Lab includes a recent £14 M investment in infrastructure and equipment to provide a prestigious facility in the UK university sector for research into engineering structures. 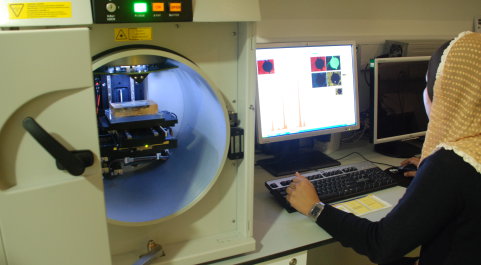 The lab houses state-of-the-art facilities for investigating all aspects of concrete degradation. Research aims to develop more effective methods for the design, life assessment and repair of concrete structures and is usually based on establishing a better understanding of deterioration processes.

Massive concrete armour units are used extensively around the world in harbour breakwaters and coastal defences.  A range of experiments are being carried out in the Structures Laboratory, to support the development and validation of computational methods (in the Department of Earth Science and Engineering http://vgest.net/applications/coastal-engineering/stresses-in-armour-units/) aimed at predicting the behaviour of multi-body systems comprising such units in the loading regimes typically experienced in reality. In-elastic models including plastic and fracture behaviour are being introduced into the computational models.

The real armour units in use today have a range of shapes and are typically 2.5 to 4.5m high, weighing between 15 and 60 tonnes.  The laboratory test programme is using scale models (around 1/8 and 1/50).  For example, these 350mm high units will be loaded in compression in a 3500KN capacity servo-hydraulic test rig, in both four-point and six-point loading configurations.

Individual “arms” have been cast onto rigid mountings to allow the frictional and damage characteristics of interactions between units to be assessed.

Department of Civil and Environmental Engineering;

In practice, when casting concrete elements on site, it is difficult, if not impossible, to avoid having any form of restraint whatsoever, which is a potential cause of cracking.  Example applications include (but are not limited to) reinforced concrete (RC) walls cast on stiff foundation bases (base restraint) and RC wall panels cast between previous pours on a stiff base (combined edge and end restraints) such as in retaining walls, liquid-retaining tanks and underground structures including tunnels.

Cracking in RC structures is problematic not only because it jeopardises aesthetics and durability but also because it may cause water leakage problems in liquid-resisting structures.  Crack widths may, however be controlled by steel reinforcement.

A series of tests are carried out in the Structures Laboratory within the Department of Civil and Environmental Engineering at Imperial College London to investigate parameters affecting cracking and crack widths in walls with base restraint and with a combination of base and end restraints.  Tested walls are typically 3.5m long and vary in height between 0.5 and 0.75m.  Steel fixing as well as concrete mixing and casting is carried out by qualified laboratory technicians in the Structures Laboratory.  Following casting, the RC walls are monitored for cracking during early age thermal contraction and long term shrinkage.  In addition, quality control tests such as cube and cylinder strength tests are also carried out within the Structures Laboratory.

Preparation for casting the ends of a wall with combined restraint