Volcanoes and their impact on society 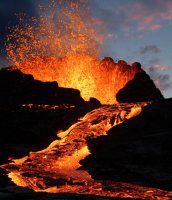 There are thought to be about 600 million people living close enough to active volcanoes to be affected when they erupt. Casualties from volcanic eruptions have been modest (around 300,000 in the last 200 years) compared to other natural hazards, but economic losses and societal disruption can be considerable.

The modest sized eruption of Eyjafalljokull volcano in Iceland in April and May 2010 did not kill anyone but disrupted the travel of millions of people and costs the airline industry billions of dollars. This emergency highlighted the increasing vulnerability of modern globalised societies. New approaches to volcanic hazard assessment and risk management are emerging as society requires more information to respond to volcanic emergencies.

These approaches are illustrated with the eruption of the Soufriere Hills Volcano, Montserrat. In the very short history of civilisation, a few thousand years, there have been comparably few very large volcanic events, which have global effects.

Such events include very large lavas flow eruptions, such as Laki (Iceland) in 1783 and major caldera-forming explosive eruptions, such as Tambora in 1815 and Tianchi around 930 AD. Much larger magnitude eruptions have happened regularly when time scales of millions of years are considered. Such extreme eruptions perturb global climate for several years and can have severe environmental impacts and consequences.

The modern globalised world is arguably uniquely vulnerable to very large volcanic events, making the study of their return periods, possible environmental effects and consequences a key goal of volcanology.