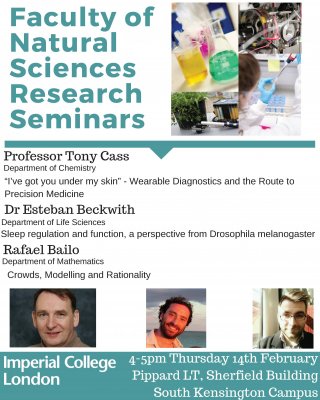 Register for the FoNS Seminar here

Join us to hear a series of talks by FoNS academics and learn more about our research in the natural sciences. All welcome! 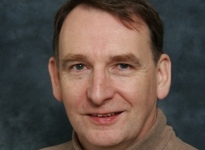 Title: I’ve got you under my skin: Wearable Diagnostics and the Route to Precision Medicine

Molecular markers have a long history in diagnosing disease and guiding treatment, typically these were ‘blood tests’ where a sample of venous blood was drawn (more or less painfully) and the levels of a biomarker compared with those of the ‘healthy’ population (the so-called reference range). Elevated or reduced levels, along with other indicators as well as the individual’s personal and family histories were then used to draw conclusions about their state of health or illness. Sometimes other bodily fluids such as urine, saliva or exhaled breath were analysed, but blood was the sample of choice and still accounts for the vast majority of clinical diagnostic tests.

There are however many problems associated with this rather simple view of the relationship between biomarker levels and illness. One is simply statistical; a Gaussian distribution of biomarker levels inevitably includes values that are significantly higher or lower than ‘normal’ and unless the baseline value for a particular individual is known they may be misdiagnosed. A second point is that some important biomarkers show pulsatile changes that are clinically more significant than a single value. Circadian rhythms such as those shown by the hormones cortisol or melatonin are long established, but more recently the importance of ultradian (higher frequency) cycles are becoming appreciated. Finally, the act of taking the sample can itself lead to changes in the concentration of the biomarker. The so-called ‘white coat syndrome’ is well known in blood pressure measurements where not only do people become hypertensive but certain molecules in the blood (e.g. procalcitonin) also rise.

None of these problems can be addressed through sampling blood or urine, instead continuous measurement over hours or days could be a route to unravelling the individual complexity of biomarker levels.

We have become particularly interested in continuous monitoring of biomarkers in the subdermal interstitial fluid (ISF) which bathes the tissues just underneath the outer layer of dead skin cells (the stratum corneum) using minimally invasive (and hence painless) microneedle sensors to provide insight into both naturally occurring molecules but also drugs and other xenobiotic compounds.

Using electrochemical biosensing methods along with low cost fabrication techniques we have demonstrated proof of concept for several of biomarkers and drugs, in vitro and in volunteers. In the case of drugs in particular, the ability to carry out ‘real time’ monitoring of uptake and clearance of the molecules will allow for truly personalised, dynamic treatment regimens to be established.

Title: Sleep regulation and function, a perspective from Drosophila melanogaster

The talks will be followed by an informal drinks reception.