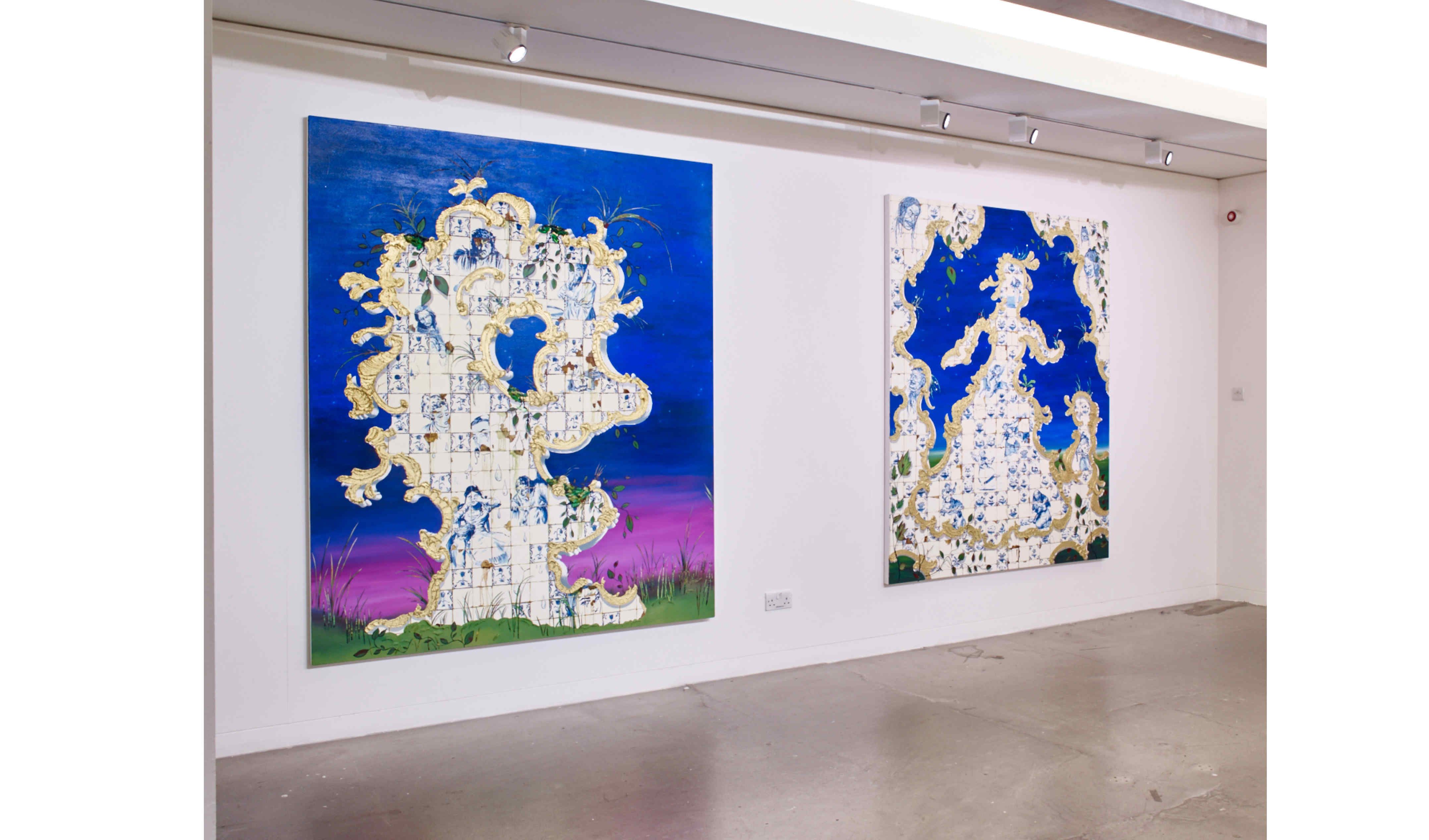 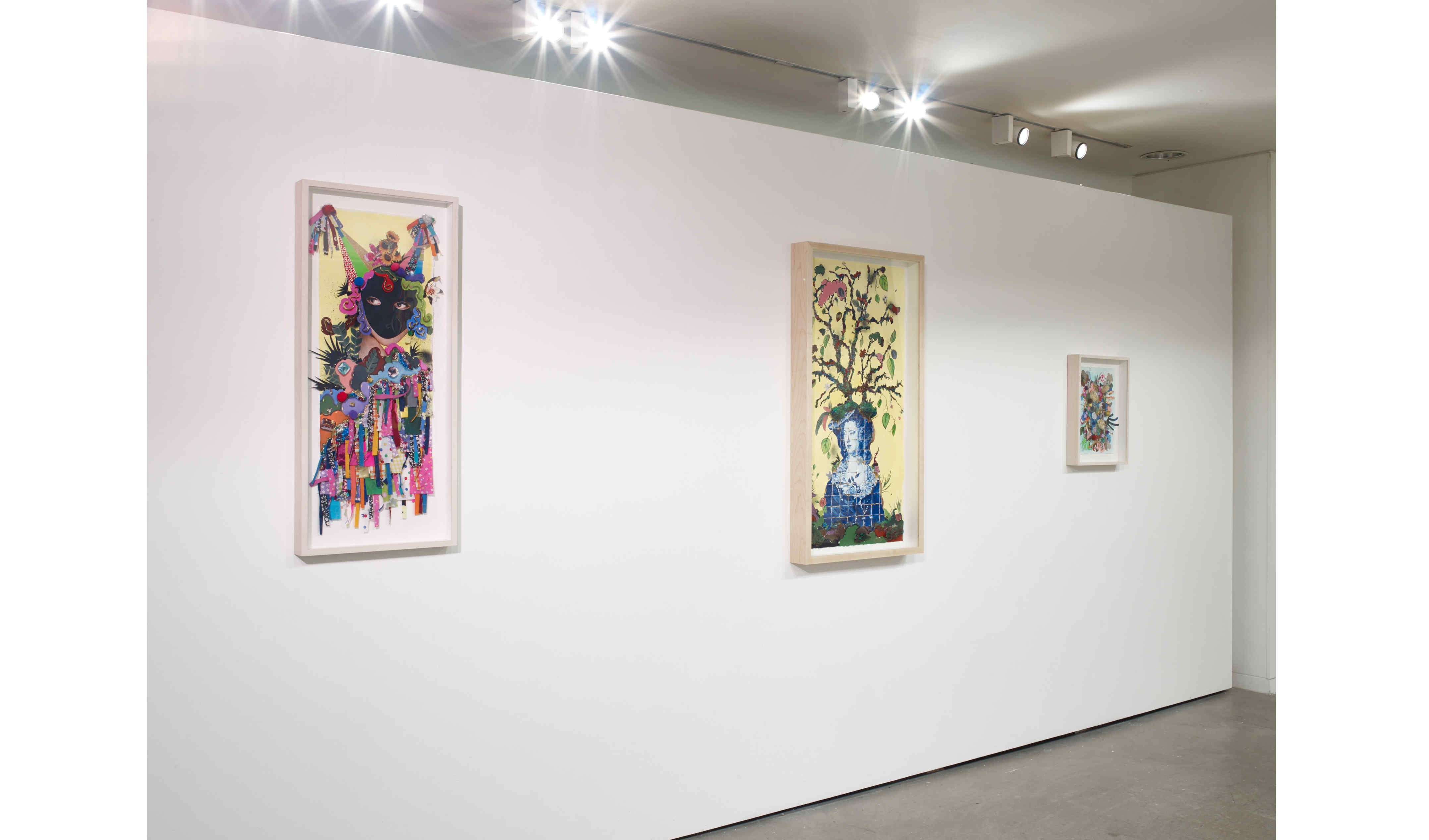 Artists in this exhibition: Alicia Paz

Alicia Paz's paintings and collages deal primarily with identity and the notion of a divided subject/author, and explore the mutability of subjectivity. In recent years, Paz has focused on the female figure: the Self is experienced and presented as multiple, paradoxical, and in flux. Inhabiting fantastical and exotic landscapes, her feminine subjects become fused and combined with organic life. Strange and unsettling visions of tree-women and monster-women also represent the fusion of the Subject with painting itself: Paz often depicts amphibian or plant-like figures “weeping” pigment, their limbs, hair, and various ornamental accoutrements flowing, river-like, or dripping, as if extracted from a colourful post-cognitive swamp.

In a new parallel series, multi-faceted representations of jubilant “walls” allow for an exploration of identity as an interweaving of narratives. In the context of 18th century grotesque ornamentation, these paintings playfully consider the decorative as a vehicle for social satire and caricature. In consultation with Ceramics Curator Terry Bloxham, Paz has studied the iconography of Delftware tiles in the V&A Museum collection, as a departure point for her own imaginary tiles. The resulting large works represent tiled walls and figures, reflecting on themes of “wall-painting as ruin”, and “wall as mask”. The painted trompe l’oeil depiction of tiles allows for an exploration of image-as-grid, incorporating interruptions and fragmentations, because tiles, in so far as they can appear damaged, replaced, restored, can be imperfect representations. It is that mix of functionality, decoration, and imperfection in portrayal that interests the artist.

Alicia Paz has had several solo exhibitions in the UK, France, Germany, Mexico, and Argentina, including the Mexican Cultural Institute in Paris (2013), and Dukan Gallery, Leipzig (2014). A semi-retrospective exhibit of her work was featured in L.A.C. Sigéan in collaboration with FRAC Languedoc-Roussillon, France, as part of their regional Biennial programme (2010). Paz has participated in various international painting survey exhibits such as Slow Magic, Contemporary Approaches to Painting at the Bluecoat Gallery, Liverpool (2009) as well as Heute. Spektrum. Malerei. at Kunstmuseum Magdeburg (2012). Other solo projects include Drawing Now at the Carrousel du Louvre with Galerie Dukan & Hourdequin (2012), Pippy Houldsworth Gallery, London (2006) and Ruth Benzacar Gallery in Buenos Aires (2005). Paz's work has been the subject of various catalogues and publications and has been reviewed internationally (Art News, Art Press, Modern Painters, Art Forum, The Guardian, Le Monde, New York Times, etc…). 2016 projects have included a retrospective solo show, The Garden of Follies, and a public sculpture commission, both at Kunstmuseum Magdeburg in Germany. The solo exhibition was accompanied by a 104-page bilingual catalogue designed by Fraser Muggeridge Studio and is published by Verlag für Moderne Kunst, Vienna.