The study of nanomaterials addresses the synthesis, structure and properties of matter with discontinuities or interfaces at the nanoscale. Literally, the 'nano-' prefix implies distances measured in 10-9 m (nanometres), but, more significantly, this regime is one in which the critical lengths associated with many important phenomena become comparable to the size of the structure, and hence new behaviours may arise. In other words, the nanoscale lies between the continuum and atomic domains, at the union between the ever-shrinking world of microelectronic engineering and the growing complexity of chemical synthesis and self-assembly. Although a small number of excellent examples are already ubiquitous (the MQW solid state laser, and the GMR hard disc read head spring to mind), Nanotechnology is widely recognized as one of the key research topics of the 21st century.

The last century of materials science has proven the enormous value to society of controlling both the composition and structural arrangement of solid matter. On the whole, materials systems have been designed only at the micron-scale or larger, although a few particularly successful examples exploit nanoscale structures fortuitously (for example, carbon-filled rubbers, semi-crystalline polymers, and Al-Cu alloys). More recently, the potential value of developing nanomaterials systems has been recognised, and has become a major focus of research activity. However, the real opportunity will ultimately derive not from controlling either the nano or the micro regime, but integrating the design of the material at every length scale. As yet, we only intentionally tackle one or two rungs on the ladder, but there are five orders of magnitude between a polymer molecule and a human hair; to paraphrase Feynman, “there is plenty of room in the middle”.

There is no doubt that this goal is an extremely challenging problem, but that it promises great rewards. Natural hierarchical materials forged through evolution, such as sponge , wood and bone, exemplify the value of the approach, by maximising the performance of relatively poor constituents. Although, as yet, we have nowhere near the dexterity of Nature, we do have the opportunity to use fundamental building blocks with intrinsically superior properties, not limited by physiological conditions. Designing functional, multiscale materials will require a combination of top-down and bottom-up approaches. These terms are familiar in nanotechnology, particularly in electronics applications, but are usually limited by lithography, to loosely two dimensional systems. Our long term motivation is to draw on these concepts, but to apply them to the creation of a new class of ordered three dimensional materials using high aspect ratio particles as scaffolding at every length scale.

One of the major themes of nanomaterials concerns nanoparticles of which carbon nanotubes have become a prime example. They are an exciting allotrope of carbon (joining diamond and graphite)that was only fully recognised just over ten years ago, and are considered to belong to the fullerene family. A wide range of applications have been suggested including nanoelectronics, ultrastrong materials, field emission guns, and catalyst supports. We are particularly involved with the use of nanotubes in electrochemical supercapacitor electrodes, nanotube arrays for gas filration and storage, and nanotube-modified polymer composites. One of the limiting factors on the development of such applications has been the limited quantity of high quality nanotubes that have been available from standard growth routes. More recently, increasing numbers of commercial companies have been become involved in large-scale production resulting in falling costs. Nevertheless, it is still important to synthesize materials in-house, in order to produce material with desired specifications. Many applications will also require surface modification of nanotubes, either through bond-formation or adsorption, in order to control their interactions with each other and with other functional materials. Although at a much earlier stage of development, the emergence of non-carbon nanotubes and nanorods promises a whole new world to explore.

Carbon nanotubes can be thought of layers of the conventional graphite structure rolled up into a cylinder such that the lattice of carbon atoms remains continuous around the circumference. The number of shells varies from one (a single-walled CNT) to as many as, say, fifty with the spacing between the layers matching closely the layer spacing in graphite (around 0.34 nm). CNTs are usually 1-50 nm in diameter and typically a few microns long, although examples on the order of centimetres have been observed. The constraints imposed by the continuity of the lattice mean that, in general, every shell has a different stucture. There are only two classes of non-helical tube - those arranged with the sides of the hexagonal carbon rings parallel or perpendicular to the axis of the tube, called zig-zag or armchair respectively, the remainder are chiral. The 'chirality' or 'helicity' of nanotubes determine (especially) their (opto)electronic properties.

Nanotubes can have a wide range of structural perfection depending on the synthesis method used to grow them. The defect concentration is known to have a significant impact on nanotube properties and can lead to curvature or kinking. Indeed sometimes structures are grown in which the graphite layers are arranged at an angle to the axis rather than parallel to the tube axis, an arrangement usually known as a 'herringbone nanofibre'. The term nanofibre is also applied to larger nanotubes, over a somewhat arbitrary cut-off of around 50 nm in diameter. The properties of individual nanotubes are quite remarkable, including uniquely high strengths (perhaps around 50 GPa), ballistic conduction of electrons, metallic or semiconducting behaviour depending on chirality and so on. The challenge is how to exploit these properties in practical situations.

The biggest commercial use of nanotubes is currently as an anti-static additive to polymers, particularly for the automotive and electronics industries. The advantage is that by adding 3-5 wt% of nanotubes, adequate electrical conductivity is acheived without degrading surface finish or impact properties. However, it is possible to produce conducting network at much lower loading fractions. The curve to the right [coming soon] (showing results for two different aspect ratios) demonstrates that a partially optimised nanotube system can acheive 'percolation' at loadings of the order 0.001 wt%, at least two orders of magnitude below the predictions for a purely random statistical network (inset curve shows experimental results in red and predictions lie in shaded band), suggesting that the network formation is kinetically controlled in this case. 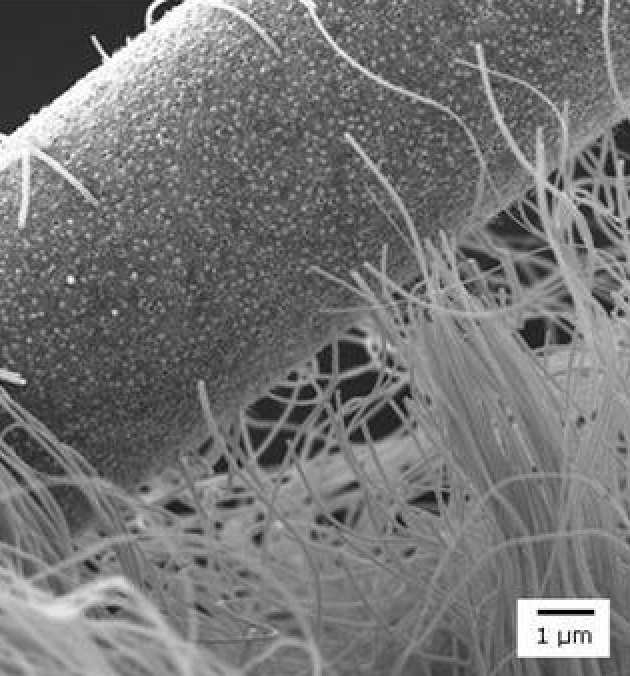 Although it is possible to improve the strength and stiffness of a variety of polymer matrices by introducing nanotubes, the full promise of the properties of individual nanotubes has not yet been realised. There are a number outstanding issues that need to be tackled, including dispersion, alignment and 'waviness' of nanotubes, stress transfer, and the possibility of internal failure. In any caser, large volume, CVD-type nanotubes do not, as yet, have optimal properties. Nevertheless, there are immediate opportunities to reinforce fine structures where conventional fillers cannot be physically accommodated. The image to the left [coming soon] shows a nanofibre-reinforced PEEK fibre, a system in which strength, stiffness and wear properties can be improved, using a filler that is actually cheaper than the matrix polymer. We are exploring similar strategies using nanotubes to reinforce polymer foams and the matrices of conventional fibre composites. By growing the nanotubes onto the surface of conventional primary fibres, we create a hierarchical composite with an optimal orientation of the nanofiller, to tackle the critical weaknesses of conventional composite materials.

One complication of studying nanotubes in thermoplastics is that the presence of the nanotubes can affect the morphology of the polymer.  It is important to take such effects into account when interpreting the results of nanocomposite studying. The effects may vary from retardation or acceralation of crystal nucleation to changes in crystal form, depending on the exact system and processing conditions.  The micrograph on the right [coming soon] shows a region of altered crystallinity next to a nanofibre in a melt-drawn polypropylene film.