NASA research: Martian lakes may have survived on surface for millions of years Scientists have analysed sedimentary rocks at Gale crater and unearthed evidience of an ancient lake system.

Scientists have shown that early Mars sustained lakes on its surface for much longer than previously thought, following an analysis of rocks.

This study provides stunning evidence that Mars really did sustain a water world for what could have been many thousands or even millions of years.

A team of researchers from NASA’s Mars Science Laboratory (MSL) Curiosity rover mission have analysed images of thick layers of sedimentary rocks that lay exposed on the northern region of Gale crater. The team believe these rocky outcrops provide evidence that a lake system in the crater’s basin probably existed intermittently for thousands or even millions of years.

The researchers looked at layers of sediment particles that would have been deposited on the bed of the lake and built up over time. They found evidence of very fine scale layers of sediment in the rocks, which the team say are best explained as ancient lake deposits. The thickness of these sediment deposits gives a good indication of the lifespan of the lake.

A previous MSL study found evidence of sediments of around one metre in thickness, suggesting that a lake lasted for a much shorter duration in the crater basin, perhaps around hundreds or thousands of years. The new study, published today in the journal Science, has found evidence in the sedimentary rock records of much thicker lake deposits up to 75 metres in thickness. These thicker sediment deposits indicate that the lakes existed for much longer than previously thought. 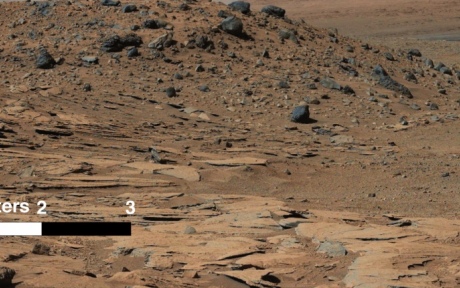 The MSL rover is travelling across rugged terrain in Gale crater, analysing rocks along the way to understand Mars' watery past (images courtesy of NASA)

The researchers say their findings have big implications for scientists studying the ancient climate of Mars, providing stronger evidence that there were sustained episodes of warm conditions when water was stable at the surface. The study also has implications for astrobiologists looking for signs of past life on the red planet. Long-lasting lakes would provide a much greater chance for microbial life to form and thrive, and for their fossil records to be preserved somewhere.

The NASA study was carried out by researchers including from Imperial College London, California Institute of Technology and the University of California.

Professor Sanjeev Gupta, co-author of the study from the Department of Earth Science and Engineering at Imperial, said: “This study provides stunning evidence that Mars really did sustain a water world for what could have been many thousands or even millions of years. Other regions on Mars, such as the huge canyon network called Valles Marineris or other craters located around Mars’ equator, may have also sustained lakes or rivers. Most importantly, a warmer wetter world means that early life may have had a greater chance of flourishing.”

In the study, the scientists suggest that sedimentary debris from the crater wall and rim was eroded by water, supplying rivers and deltas, which advanced inward from the wall, infilling both the crater and an internal lake basin. When the lakes dried up millions of years ago, wind-driven erosion carved the deposited sediments out of the crater, creating Aeolis Mons or Mount Sharp at its centre and also exposing the sedimentary rock outcrops.

Since the start of the mission in 2012, the six-wheeled Curiosity has enabled the NASA team to accumulate a wealth of knowledge about the past and present conditions in Gale crater and their implications for the past habitability of Mars.

In May 2013, Professor Gupta and his colleagues found evidence of ancient river sedimentary deposits in the form of pebbles, which indicated past water flow. In December 2013, the team found evidence of an ancient lake, which they thought may have lasted for thousands of years. This new discovery shows how a system of lakes may have been sustained for perhaps millions of years.

In September 2015, a separate team of Mars researchers revealed the strongest evidence yet that liquid water is still flowing on the red planet. Data from a NASA satellite showed features, which appear on mountain slopes, to be associated with salt deposits. These could alter the freezing and vaporisation points of water in Mars’ air, keeping it in a liquid state long enough to move.

The remote-controlled rover is now on the move again is slowly travelling up Aeolis Mons at the crater’s centre. The team will train the vehicles’ cameras on rocks further up the slope. The hope is that a significant fraction of the lower part of Aeolis Mons may consist lake deposit records, which could yield more clues about the crater’s watery past.

Daily Mail: Curiosity rover finds crater it is exploring was once a giant Martian lake that may have been teeming with life