Scientists studying deltas show how they may be able to predict where destructive changes in a river's course may occur.

A delta forms when a river meets a sea or ocean. Deltas are extremely fertile for crops, and home to over half billion people and several mega-cities. 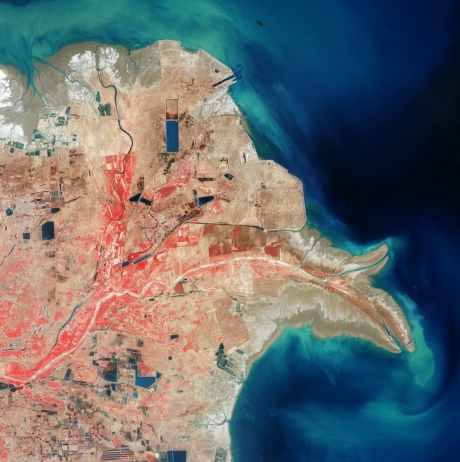 An avulsion – where the flow of water through a delta changes its course - can be sudden and unpredictable, often catching communities off-guard. When it happens, the river floods the neighbouring areas, threatening livelihoods and destroying valuable farming land.

The team suggest that their study could lead to a new method for predicting where avulsions may occur. The researchers say many river delta systems are drowning because of rising sea levels. This could push avulsions farther upstream placing more and more communities in jeopardy and making an avulsion predicting tool even more vital.

The researcher's in the video below constructed an artificial river and an ocean in the lab and monitored avulsions occurring. The experimental runtime was 150hrs, which would roughly equate to several tens of thousands of years of natural evolution in a real delta.

Many deltas are built over several thousands of years when sand and soil are deposited in huge leaf-shaped patterns called lobes. When an avulsion occurs the river changes its course and a new lobe is constructed.

The team constructed a replica of this type of river delta in the lab, which was over two metres long. They subjected it to different flooding conditions that would normally happen over a time-scale of several hundreds to thousands of years. Through their experiments they were able to confirm that the constant cycle of flooding was a key factor that contributes to locating where the next avulsion is likely to occur.

Dr Vamsi Ganti from Imperial College London's Department of Earth Science and Engineering carried out the study with his colleagues while at California Institute of Technology in the USA. It is published in the journal Science Advances.

Dr Ganti said: “Around the world we see deltas under constant pressure. The Mississippi River delta for instance, is drowning at an alarming rate, and has lost around 5,000 square kilometres of land since the 1930s. So, understanding more about avulsions is vital in protecting the people and ecosystems that deltas support, and also mitigating land loss.”

“Avulsions are often thought of as the ‘earthquakes’ of deltas because of the damage they wreak. Sudden and unpredictable changes in the course of a river can rapidly flood neighbouring land, meaning that people often have to abandon their communities before they are swallowed by the river system.

“Our research confirms the factors that make these avulsions occur, which could ultimately help people around the world make their communities more secure.”

Scientists had previously observed that lobes always reach a uniform length that is characteristic to each delta. They developed a formula that showed the lobe length is related to the gradient and the depth of the river running through the delta.

The researchers in the study discovered that the uniform lobe length only occurs when their delta in the lab was subjected to floods. This causes the lobe to reach its uniform length, which then triggered an avulsion. By bringing together all their findings the researchers are working towards a method for predicting where avulsions may occur on many of the deltas in the world.

The researchers also think their results could be used to understand how river delta systems are built on other planets that once had water such as Mars. This could help scientists learn more about past oceans and seas on other planets.