Researchers have discovered that some solar cells could be more efficient than previously thought possible, opening new doors for their development.

A team led by scientists from Imperial College London have revealed how a particular molecular structure can boost the effectiveness of polymer solar cells.

We’re hoping that companies and other researchers developing new solar panel technologies can use this idea to develop materials in new ways.

Most solar cells in use today are made of silicon, but cells constructed of polymer plastics are lighter and cheaper to produce. Despite this, they are not currently widely adopted because they do not convert light into electrical energy as efficiently.

“We found a material that absorbed more light despite no change in the chemical structure of its light-absorbing regions, so we decided to investigate why that might be; the results were really quite surprising.”

The research team, which included European collaborators from Barcelona’s CSIC, the University of Cyprus, University College London, and King Abdullah University of Science and Technology in Saudi Arabia, discovered that the new polymers could absorb up to 50 percent more light than conventional materials. This is more than any polymer material previously measured for solar cells, and is produced by the ability of the molecules to stretch outwards.

Former physics PhD student Dr Sheridan Few, now with Imperial’s Grantham Institute, analysed the structure of different polymers, and found that how much light a material can absorb is partly determined by the extension of its molecules.

Polymer plastics are made up of lots of chains of identical units called monomers, and it is how curved these individual monomers are, and hence the chain they form, that affects the material’s ability to absorb light.

“I tend to think of it like a radio aerial,” said Dr Few, “if your aerial is bent out of shape, it’s not going to receive a signal very well. Similarly, if the polymer chains in a solar panel are not aligned straight, that material won’t absorb light very well. This mechanical property of rigidity can be quantified in terms of the polymer’s ‘persistence length’.”

The team tested their theory by analysing new polymers with varying persistence lengths, and have confirmed that more rigid polymers can be used to make more efficient plastic solar cells. 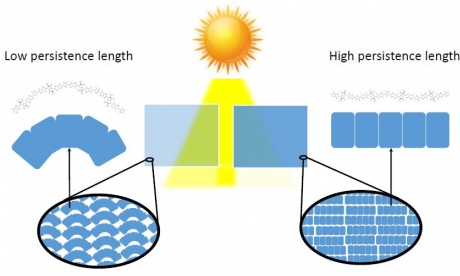 Using persistence length to analyse polymers has opened up new ways to design materials for their use in solar panels.

“We went back and tested older polymers that we had previously discounted as second-rate and found that some are actually really promising because of their high persistence lengths,” said Professor Nelson and Vezie.

“Polymers are complex, fluid structures, and if one is more or less likely to form a linear structure than another then this may help us determine which materials are more promising for use in solar technology.”

“Polymer solar panels are a long way off the efficiency of silicon materials, as their conductivity is limited,” explained Professor Nelson, “But analysing persistence lengths is a step in the right direction, and we’re hoping that companies and other researchers developing new solar panel technologies can use this idea to develop materials in new ways.”

'Exploring the origin of high optical absorption in conjugated polymers' by M Vezie et al is published in Nature Materials.