Europe's science chief came to Imperial yesterday to discuss the College's extensive ties with the continent.

Carlos Moedas, EU Commissioner for Research, Science and Innovation, met with Imperial’s senior leadership and researchers from across the College to discuss the future of European collaboration. 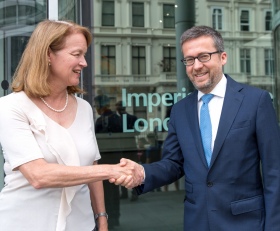 The visit took place less than three months after the EU referendum result, when Imperial’s President and Provost made clear that Imperial will remain a European university, engaging with policymakers at all levels.

During the discussion, academics shared their experiences of European collaboration and funding programmes. Among those contributing to the discussion were Professor Helen Ward, Director of Education in the School of Public Health, Esther Rodriguez-Villegas, Professor of Low Power Electronics in the Department of Electrical and Electronic Engineering, and Professor Jonathan Haskel, Chair in Economics from Imperial College Business School.

In its Strategy 2015-20, Imperial commits to bringing together and informing key decision makers for the benefit of society.

Professor Alice Gast, President of Imperial, said: “Bringing researchers and policymakers together is of critical importance, especially after the EU referendum result. We need pragmatic ideas about the future of European research – from funding to the movement of talent across the continent. Imperial is committed to being involved in that process.”

Mr Moedas advised researchers not to shy away from EU funding bids and projects following the EU referendum result, saying that for the moment “nothing has changed”. The UK government has guaranteed support for Horizon 2020 and other EU-funded research projects, even after Brexit. 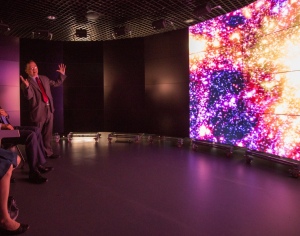 The Commissioner also visited Imperial’s Data Science Institute. Headed by Professor Yike Guo, the DSI brings together academics from across the globe to collaborate on multidisciplinary data-driven research.

Over the last decade, Imperial academics have produced more than 60,000 research papers in collaboration with peers from other European countries. Collaborations include Europe-wide projects to tackle meningitis and HIV, efforts to remove mobile phone roaming charges within the EU, and the development of next generation electronics.