A magnified image of fibre-bot

A fibre-optic medical robot that could access the body through tiny cavities is being developed by researchers as part of a major grant.

The researchers, from the Hamlyn Centre at Imperial College London, have received £6.5 million in funding from the Engineering and Physical Sciences Research Council (EPSRC) to advance the field of precision surgery. Part of the project will see the development of ‘fibre-bot’, an advanced new instrument for delivering treatments to patients via their orifices. 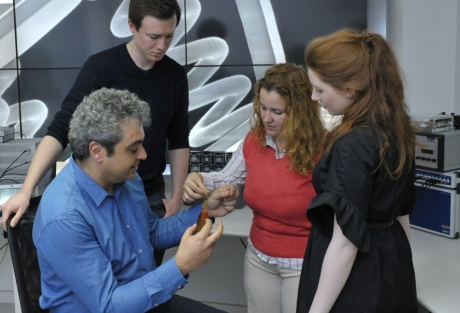 The researchers are already working on a prototype for the fibre-bot, which would be around the width of a human hair, and would consist of a flexible hollow optical fibre that is controlled by a surgeon. They hope that it could ultimately enable surgeons to conduct endoluminal surgical procedures, where the robot is introduced into the body’s natural openings such as the mouth, anus or even through the milk duct to detect and treat conditions such as cancers that affect the breast, throat, lungs, and gastrointestinal system.

The potential advantage of the device would be that it could travel through tiny cavities and get to hard-to-reach places and look for early signs of cancers, delivering treatments through its hollow core in a targeted and minimally invasive way. The aim is to improve patient recovery times and ultimately their quality of life.

Another example of where you might use fibre-bot is in cancer of the gastrointestinal tract, where it could travel to the small ductal systems in regions of the body such as the pancreas, which are not currently easy to access non-invasively, to diagnose and treat the cancer at a much earlier stage.

Professor Guang-Zhong Yang, Director of the Hamlyn Centre at Imperial College London and lead on the project, said: “We believe the new fibre-bot has great potential. One example of a disease where we think it could prove useful is in ductal carcinoma, an early stage of breast cancer that often begins in the milk ducts. In theory, a flexible robot of this size would be able to travel inside the milk duct, map the extent of the disease, and enable reliable and repeatable treatments at the microscopic level to be administered by surgeons. This could minimise the trauma on patients and improve how they recover.

“Another example of where you might use fibre-bot is in cancer of the gastrointestinal tract, where it could travel to the small ductal systems in regions of the body such as the pancreas, which are not currently easy to access non-invasively, to diagnose and treat the cancer at a much earlier stage.”

The team envisage that the fibre-bot will be able to carry out exploratory searches for signs of cancer and then, later on, deliver the treatments. During surgery, the robot’s imaging technology will provide visual information to help the surgeon steer the device. Haptic feedback technology will also help to guide the surgeon during a procedure, providing constant sensory feedback.

The five-year project will see the team develop the prototype fibre-bot technology to the stage where trials can be conducted in the lab. This will be followed by subsequent clinical studies towards the end of the project. If the technology and the clinical trials prove successful, the team predict that the fibre-bot technology could be ready for surgical applications in five years.

Imperial will also be sharing in the EPSRC’s £6.5 million capital investment programme. Funds will be used by the College to further enhance the micro-fabrication laboratories, where the surgical robots are developed.

"Innovation is at the heart of our Industrial Strategy and the launch of the Government’s Digital Strategy underlines our commitment to this vital sector. By supporting British businesses and investing in dynamic fields such as robotics and AI, we will help put the UK at the forefront of global innovation."