Stopping kidney stones in their tracks

During the talk – “Stopping crystal growth in its tracks: pathways to therapies for pathological crystallisation” – Prof Ward described an ongoing study into the fundamental molecular characteristics of L-cysteine, a naturally occurring amino acid that is the cause of some kidney stones.

L-cysteine kidney stones are built from stacks of plate-like hexagonal L-cysteine crystals and are the cause of 1–2% of all kidney stones, such as those experienced by people with cystinuria. Although this rare genetic disease affects just 1 in 10,000 people, patients can suffer short recurrence times, with painful stone events arising every one or two months.

Urologists normally use ultrasound treatments to break up kidney stones, but this option is not always successful. In addition, thiol-based drugs taken by cystinuria sufferers often come with severe side effects.

…this is a nice example of physical science, engineering, chemistry and crystal physics, translating into something that may actually serve a public good…

As an alternative to current therapies, Prof Ward and his team – including collaborator Dr Matthew Lewis in Imperial’s Department of Surgery and Cancer – are investigating a novel way to treat cysteine-based kidney stones. They aim to understand the mechanism by which the L-cysteine crystals grow and form aggregates in the renal system. Ultimately, they hope to identify a drug to effectively prevent crystallisation of L-cysteine in the human body and the formation of kidney stones.

In addition to the AFM measurements, Prof Ward’s team has developed a mathematical model to approximate how L-cysteine’s spiral crystals develop. They have also used a mouse model – in work conducted at Rutgers University – to test the effectiveness of their L-cysteine inhibitors for treating kidney stones. They find that mice treated with the biofunctionalised L-cysteine drugs developed smaller stones than mice who were untreated or were treated in an alternative way.

On the basis of these results, the team now hopes to progress their work to human clinical trial. They would like to test up to three of their L-cysteine impostor drugs on cystinuria patients, to assess their activity and toxicity within humans. This kind of investigation into the fundamentals of crystal growth of molecules may also be applicable to other diseases (such as malaria) and to wider problems, including the development of defects in organic electrical devices. 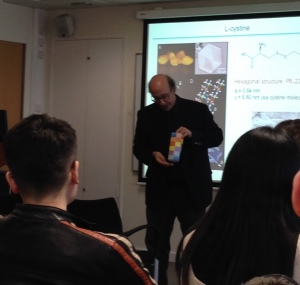 Demonstrating the symmetry of "insidious, but pretty" L-cysteine

Prof Ward is a chemist with many years of experience working in both academia and industry. He moved to New York University (NYU) in 2006 to create the Molecular Design Institute within the Department of Chemistry. He is also the Director of NYU’s Materials Research Science and Engineering Center. His wide-ranging research interests (spanning organic solid-state chemistry, crystal engineering, functional organic materials, biominerals and atomic force microscopy) epitomise IMSE’s multidisciplinary, collaborative and translational ethos, and his seminar  was a stimulating example of a topic in which molecular science and engineering can make a valuable contribution to real-world problems.

So far this year, IMSE has welcomed Prof Bill David, Prof Ellis Gartner, Prof Andy Cooper and Prof Tom McLeish as Highlight Seminar speakers. Prof Julian Eastoe will present the next in the series, “Surfactants at the Design Limit”, on 23rd March 2017 at 14.00–15.00.