Target Malaria, an international consortium led by Imperial, has received a $17.5 million grant to help develop ways to control the spread of disease.

The grant comes from the Open Philanthropy Project, whose mission is to identify outstanding giving opportunities and to openly share the results so that anyone can benefit from them. It makes grants and advises philanthropists on how to maximize the impact of their giving.

This generous award will be hugely useful in allowing us to contribute towards a world free from malaria.

Malaria infects more than 200 million people each year and causes more than 430,000 deaths, over 90 percent of which occur in sub-Saharan Africa.

Led by Austin Burt, Professor of Evolutionary Genetics at Imperial, Target Malaria aims to tackle malaria at the source. The project’s approach is malaria control by mosquito control – by reducing the numbers of malaria mosquitoes, the aim is to reduce the transmission of the disease.

Worldwide there are more than 3,500 species of mosquito, with 837 of them in Africa. Of these, a single cluster of three very closely related species are responsible for most of the malaria transmission – Anopheles gambiae, Anopheles coluzzii and Anopheles arabiensis. 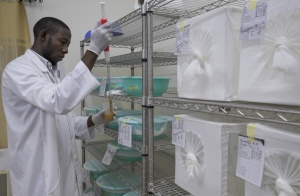 Within this cluster, Target Malaria is focused on reducing the number of female malaria mosquitoes. Only female mosquitoes bite people and are therefore able to transmit malaria when they take a blood meal, and the number of productive females in a population will usually determine future population size.

The project is evaluating several approaches to reduce the number of Anopheles gambiae using genetically modified mosquitoes. This work is still at an early stage, but the computer models indicate that the methods have the potential to significantly reduce the numbers of these mosquitoes and the transmission of malaria.

Target Malaria is taking a stepwise approach to development, working with regulators and communities in three African countries to ensure acceptance and approval at each stage. 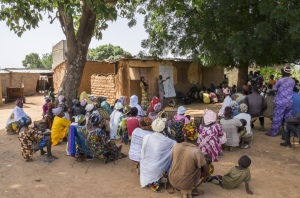 Professor Burt said: “Target Malaria is a not-for-profit consortium aiming to develop and share new cost-effective and sustainable genetic technologies to modify mosquitoes and reduce malaria transmission. This generous award will be hugely useful in allowing us to contribute towards a world free from malaria.”

The award is for general support and to help the project develop and prepare for the potential deployment of gene drive technologies to help eliminate malaria in sub-Saharan Africa, if feasible, ethical, safe, approved by the regulatory authorities, and supported by the affected communities.

Target Malaria's work holds the potential to significantly reduce the burden of malaria in sub-Saharan Africa, and we are excited to provide support to this effort.

Program Officer for Scientific Research at the Open Philanthropy Project

The grant will run over four years and will support the project in further developing training and outreach programmes, researching potential ecological effects of releasing gene drives, and developing its operational capacities and regulatory support.

Nick Beckstead, Program Officer for Scientific Research at the Open Philanthropy Project said: "Target Malaria's work holds the potential to significantly reduce the burden of malaria in sub-Saharan Africa, and we are excited to provide support to this effort."

The new funding boost will add to the $35m already given to the project by the Bill & Melinda Gates Foundation. It follows a $13.5m donation from Good Ventures in March 2017 to support the Schistosomiasis Control initiative at Imperial in its work to treat up to 27 million people with schistosomiasis and intestinal worms across East, West and Central Africa.