Indian village gets electricity for the first time, thanks to Imperial student An Imperial PhD student has helped to electrify a village in central northern India, connecting 100 homes to a mini solar energy grid.

Clementine Chambon, a final-year PhD student in the Department of Chemical Engineering, is celebrating the successful installation of an eight-kilowatt mini solar grid in the village of Sarvantara, which is located in the state of Uttar Pradesh in India.

Clementine helped to set up the mini-solar grid via her social enterprise start-up company called Oorja. The company provides affordable and reliable power to rural communities in India that are currently not connected to the country’s national energy grid network. The company also aims to provide a stable source of electricity to villages that currently receive a very poor and erratic supply of electricity. 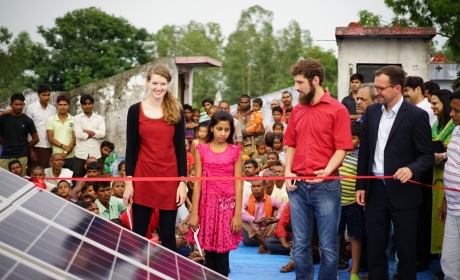 Clementine said: “After months of preparation, we are delighted to see the smiles on the faces of our happy customers, to hear their reports of how electricity is allowing their children to study longer, and their hopes that a computer centre will be opened in the school so that students can learn how to use a computer.”

The mini solar grid provides around 1,000 people with energy for affordable lighting, phone charging and fans to cool homes.

The renewable energy generated will also power pumps to provide irrigation services to farmers, providing significant cost savings compared to diesel powered pumps, which is what most rural villages like Sarvantara rely on. 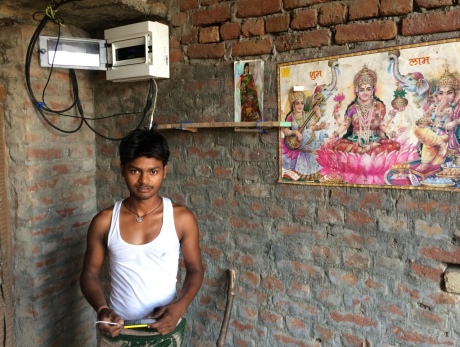 This villager is charging his phone at home instead of 5 kilometres away, which was previously what he had to do

Forty of the 100 households powered by the system will be fitted with smart meters to enable remote monitoring of energy generation and consumption in real-time. The data will help Oorja to analyse the performance of the system and improve the services they provide.

Oorja has also partnered with the Grantham Institute - Climate Change and Environment. A Grantham team led by Professor Jenny Nelson will also have real-time access to the smart meters and they will use the data to analyse the effectiveness the system and extrapolate information about its potential impact on the environment, if scaled up.

Clementine added: "Demand for electricity is high, especially for pumping water for irrigation. The onset of the monsoon seems to be delayed this year and poorer rainfall than average has been predicted. Farmers are reporting the effects of climate change and the risk it poses to them in the form of crop failures. Villagers are particularly keen to sign up to receive energy from our system for affordable irrigation services. They are very relieved that an alternative to expensive diesel pumps will be available, especially as the diesel price in India is expected to get much more expensive, following recent deregulation of the market." 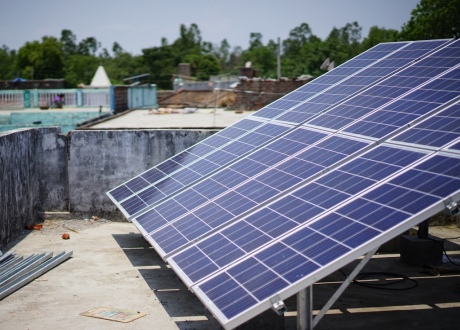 The village of Sarvantara was nominally electrified by the government nine months ago during election season when electricity poles from the local grid operator were placed in the village. However, the poles were never connected to the grid. Oorja’s mini-grid is the first time that the village has had access to a reliable source of electricity, which is sustainable and available to all.

“Community members are excited that electricity has finally arrived in their village. However, there has been a feeling that this has been long overdue as the government has been promising its arrival for many years, which older members in the village can attest to. I am really glad that a small start-up can step in and fill a void in the energy market in India. This gives us a sense of optimism that our business model is working,” added Clementine. 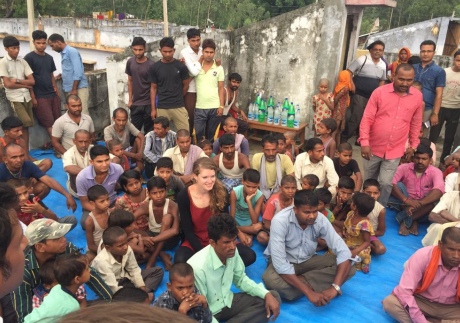 Clementine and locals at the official launch

Oorja was founded in 2015 by Clementine and her colleague Amit Saraogi who is a social entrepreneur. The two joined forces to use clean energy as a catalyst for local economic growth. Their objective is to use renewable energy technologies to maximise the social and economic benefit for communities while reducing their reliance on kerosene and diesel generators, which could lessen their impact on the climate by reducing emissions.

The next stage will see Clementine and Amit pilot a hybrid mini-grid that will generate electricity from solar energy and biomass. This could provide a bigger supply of electricity to power small enterprises, such as grain mills, sewing cooperatives and water purification stations. The Oorja team then plan to raise more funding to enable them to roll out dozens more mini-grids to other villages in 2018.

According to Oorja, one in five of the 1.3 billion people without access to electricity live in India.

Access to clean, affordable, reliable and sustainable energy is a priority for India's development needs while staying within the climate's limits.

The decentralised renewable energy sector in India is predicted to be worth more than $40 billion by 2020.