The Tsinghua-Imperial Research and Innovation Fund, which brings together two of the world’s leading research universities, aims to kick-start innovative research projects and concepts that are showing signs of promise but are at an early stage in development and need funding to progress.

Imperial and Tsinghua have a shared ambition to support ground-breaking research and create successful partnerships.

The awards are expected to cover small-scale experiments, the development of prototypes, and will enable academics and students from both institutions to collaborate and exchange ideas more easily.

Imperial and Tsinghua have invested an initial $300,000 into the programme over three years. If the fund succeeds, the universities anticipate significantly increasing their financial support. 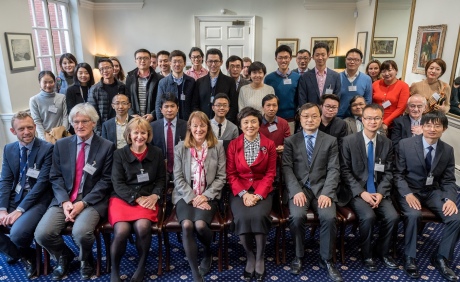 Tsinghua and Imperial academics and alumni

The announcement coincides with the UK-China High Level People to People Dialogue. The Dialogue is a key pillar in the UK-China relationship, providing a forum to celebrate ties between the two countries, and a platform to drive greater co-operation.

Announcing the fund, Professor Alice Gast, President of Imperial College London, said: “Imperial and Tsinghua have a shared ambition to support ground-breaking research and create successful partnerships. Both universities recognise the importance of bringing people together to exchange ideas and collaborate.

“This new fund will help our innovative academic staff to pursue ambitious collaborations and explore new areas of research."

Speaking at the launch, Professor Chen, said: "This fund will facilitate faculties to work together on common global challenges, and help solve and alleviate those challenges.

'Double alumni' of both Imperial and Tsinghua include Mayor of Beijing Chen Jining and Director of Imperial's Data Science Institute Professor Yike Guo.

"I expect more collaboration in future to experiment and implement." 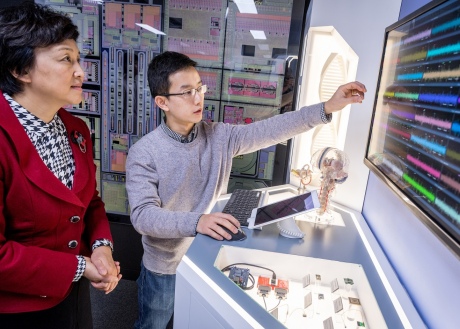 Earlier in the day Professor Chen, researchers, officials from Tsinghua University and its corporate partners met academics and students from Imperial and visited its research laboratories.

Professor Chen and the delegation from Tsinghua then visited the Data Science Institute where they were given a demonstration of the Data Observatory.

Dr David Birch and Dr Kai Sun showed how the observatory, the largets of its kind in Europe, can be used to visualise data, such as Bitcoin and Ethereum transactions. 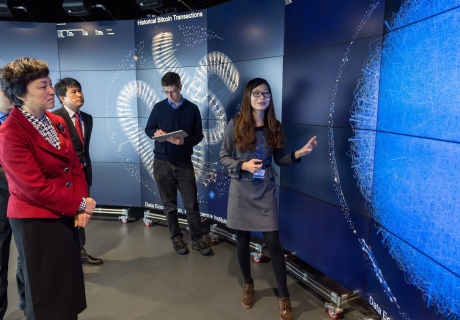 A similar seed fund partnership was launched between Imperial and the Massachusetts Institute of Technology (MIT) in 2015. Early collaborations that received funding included projects looking at improving battery life and performance, and developing computers that ‘think’ differently.

Imperial is the UK’s top academic research collaborator with China. Imperial researchers have co-authored more than 3,000 publications with their Chinese peers over the past five years.

Imperial has 2,600 Chinese students – the largest group other than Britons –and 225 Chinese staff, including world renowned scholars like Professors Yike Guo, Jianguo Lin, Xiaodong Zhang and Guang-Zhong Yang. Imperial has more than 7,000 alumni in China including Mayor of Beijing Chen Jining.

Imperial and Tsinghua University have collaborated together previously on several projects. The institutions are currently developing new smart grid and energy storage technologies, supported by the UK’s Engineering and Physical Sciences Research Council and the National Natural Science Foundation of China.