Artificial intelligence experts question if machines can ever be truly creative Leading experts in artificial intelligence (AI) debated whether machines can ever be truly creative during an event at Imperial College London.

The panel debate was part of the Night of Ideas, a programme of free debates exploring the latest ideas behind issues central to our times organised by the Institut Français.

Academics from Imperial and other London institutions, were joined by a director from Spotify to talk about their latest research involving AI and discussed the creativity potential of computer software.

The experts debated how developments in AI were enabling machines to produce music and paintings but questioned whether this meant they were being truly creative and should be recognised as artists in their own right. 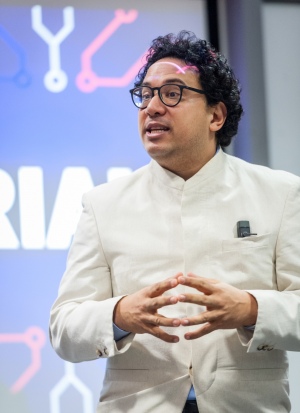 Dr Aldo Faisal, from the Department of Bioengineering and Department of Computing, gave his thoughts on what is powering the AI revolution. Dr Faisal’s research is focused on investigating the links between neuroscience and AI.

Dr Faisal, Director of the Brain and Behaviour Analytics Lab, and his team are developing software which can understand a person’s intentions by detecting their eye movement. For example, a person can use the software to direct a robotic arm holding a paintbrush with just their eye movement to paint a picture they are imagining in their mind. 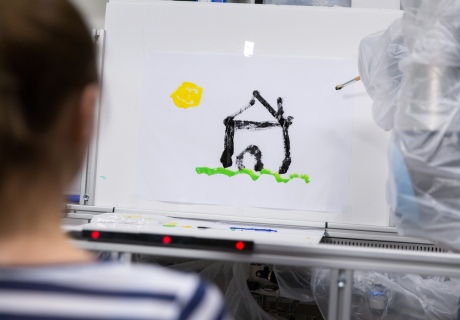 Another use of the technology is for wheelchair users to control the movement of a motorised chair, by just looking in the direction they want to travel.

Dr Aldo Faisal said: “AI can help bridge some broken links in your neuro system to help you restore functions. AI is not just about autonomous agents, but systems that understands what humans want.

"We can train machine learning systems to decode our natural intentions.
All of this is progress which is enabled by collecting data, and what powers the AI revolution is deep learning technologies.”

François Pachet, Director of Spotify Creator Technology Research Lab, spoke about how he had worked with French musician Benoît Carré to create the first mainstream album with AI.

The music software, called Flow Machines, can write original melodies and suggest the chords and sounds to play with them.

The AI works by analysing existing musical scores to spot patterns, such as how the chords change or how long melodies last, and then it creates its own short tunes in response.

Professor Simon Colton, Professor of Computational Creativity in the Department of Computing of Goldsmiths College, University of London gave a talk about how AI can be used to create original artwork.

The Painting Fool software, developed by Professor Colton, is capable of inventing visual objects and scenes that don't exist in reality.

Professor Colton wants the software to be recognised as a creative artist in its own right.

Launched in 2017, the Night of Ideas is a global project staged simultaneously in Paris, London and worldwide. The event was opened by Jean-Pierre Jouyet, French Ambassador to the UK.

Imperial's Artificial Intelligence Research Network and the French Tech London also hosted an AI Tech Showcase ahead of the debate. Some of the innovations included a drawing robot, dancing drones, and an AI app for visually impaired people.

Imperial has strong science and research connections with France and recently set up a joint mathematics laboratory with the CNRS.

Ahead of the AI debate, Professor Nick Jennings, Vice-Provost (Research and Enterprise), spoke about Imperial’s strong ties with France.

Professor Jennings said: “We’re very proud of our strong ties with France. We’ve published more than 8,000 research papers together in the last decade, and we have nearly 700 students, our second largest international group.”