The use of digital image correlation in structural health monitoring

Strain measurement by digital image correlation works by correlating two images of a structure taken at different load states using a conventional CCD camera. The difference in strain at different positions between the two load states is then calculated by correlating the two images. The idea is that damage in the form of cracks, delaminations, corrosion etc changes the strain field over the surface of the structure and so can be detected by looking for anomalies in the strain field. Small cracks are likely to disturb the strain field over a relatively small area and this can be accommodated by focusing the image to a smaller area, which also has the benefit of improving the strain resolution. Conversely, larger delaminations in composites are likely to affect the strain field over a larger area and so will be detected at lower resolution, giving faster area coverage. The test will work by taking an image of the structure at one load state, e.g. an aircraft on the ground, and then loading it by e.g. pressurising the fuselage if this is the area to be tested. Another image is then taken and the two are compared. This project is investigating the feasibility of the method. 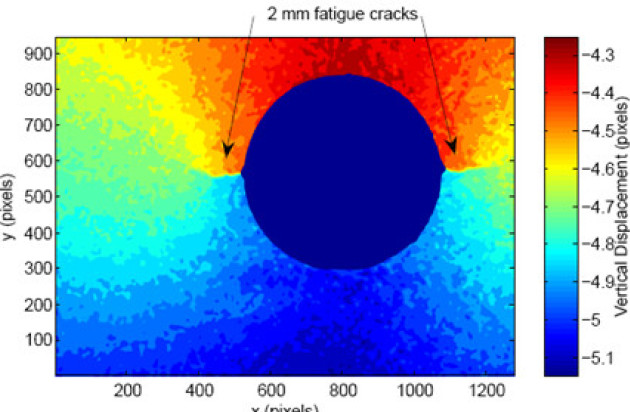