Reversal of the solar magnetic field 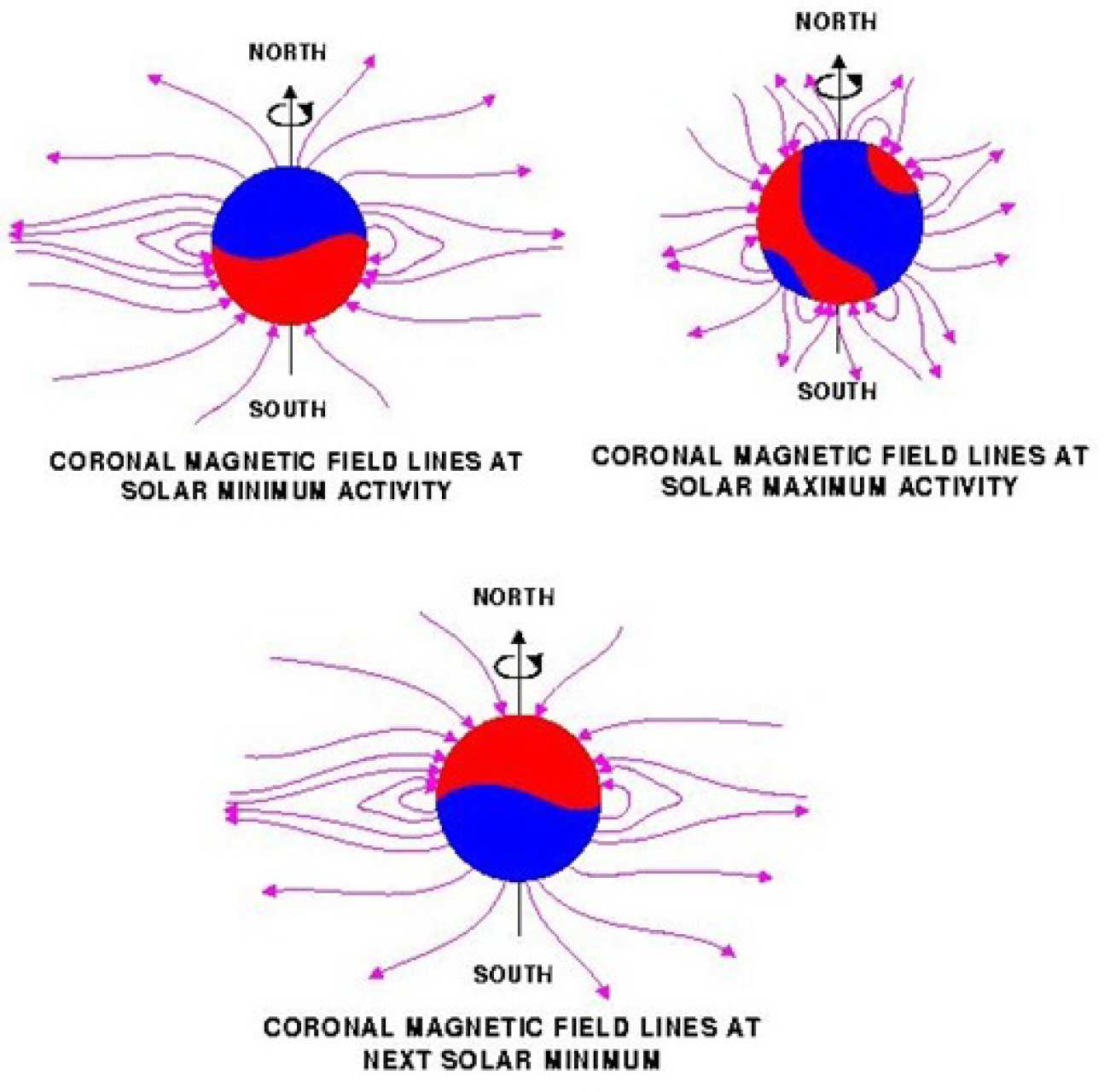 In November 2000, the ESA/NASA Ulysses spacecraft flew over the south polar regions of the Sun at a distance of 2.2 AU and a latitide of 80.2°S. (1 AU is the distance from the Sun to the Earth.) During this period solar activity was (and still is) close to maximum. It is during this time of maximum activity, every 11 years, that the solar magnetic field undergoes a reversal. The reversal is not instantaneous, but involves a complex restructuring of the magnetic field which appears to take at least several months....

The diagrams on the right show how magnetic field lines in the Sun's atmosphere, the corona, vary through the solar activity cycle.

When Ulysses first flew beneath the south pole of the Sun in 1994 when solar activity was low, the Imperial College magnetometer encountered only magnetic fields pointing towards the Sun, consistent with the first of the diagrams above. When Ulysses returned to the south polar regions in November 2000 the magnetic field was found to be split into a number of sectors of opposing direction, one type pointing towards the Sun and the other pointing away from the Sun, consistent with the second diagram above. The fact that this behaviour was found at the highest latitudes reached by Ulysses suggests that the reversal of the solar field was underway at the time of the Ulysses polar passage.

The following two images from the LASCO coronagraph onboard the SOHO spacecraft, one from solar minimum activity in 1996 and the other from the present solar maximum, give a qualitative impression that the above diagrams are correct:

The SOHO/LASCO data reproduced here are produced by a consortium of the Naval Research Laboratory (USA), Max-Planck-Institut fuer Aeronomie (Germany)), Laboratoire d'Astronomie (France), and the University of Birmingham (UK). SOHO is a project of international cooperation between ESA and NASA.

SOHO continually provides images of the Sun and its atmosphere from a fixed vantage point near the Earth. Although Ulysses does not have the capability to produce such images, the images from SOHO are very useful to the Ulysses scientists in helping them to interpret their observations at high solar latitudes. The bright areas indicate where plasma (ionised gas) in the solar atmosphere is trapped in the regions where magnetic field lines form loops that return to the solar surface, and thus give us a visual record of where such magnetic loops are located. 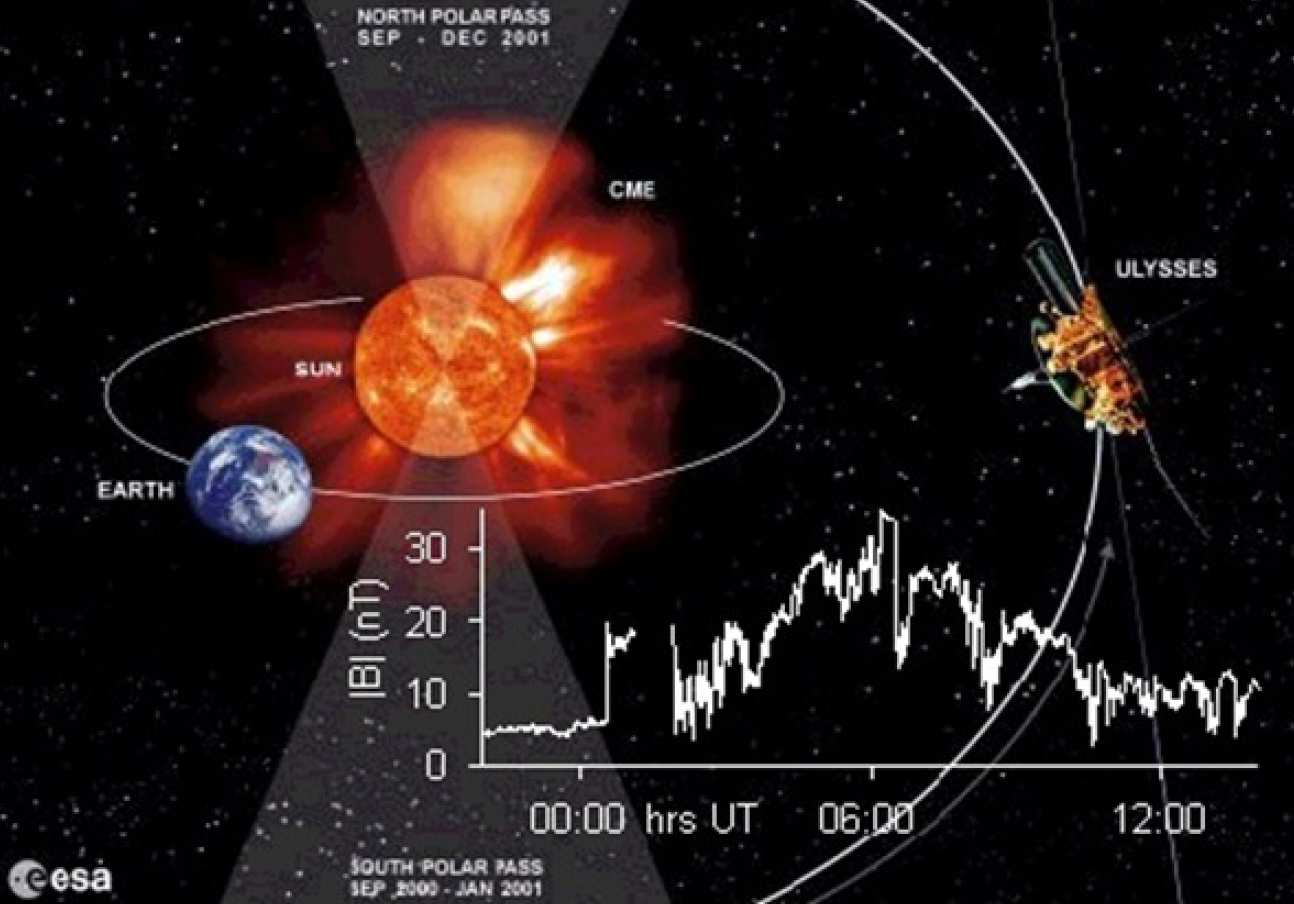 On 10th May 2001 the Imperial College magnetometer onboard the Ulysses spacecraft measured, at 35 nT, the strongest interplanetary magnetic field it has encountered during its 10 years plus mission so far. This is about seven times the typical interplanetary field strength in the vicinity of the Earth. The cause of this extreme event was quickly identified as a coronal mass ejection (CME) which had left the Sun three days earlier on 7th May.

Ulysses, launched on 6th October 1990, was propelled into a polar orbit of the Sun by a gravitational swingby of Jupiter in 1992 to become the first spacecraft ever to explore the heliosphere over the full range of latitudes away from the ecliptic plane. The orbit has a 6 year period, thus the first six years of the mission gave a characterisation of the helisophere under the relatively simple conditions of solar minimum activity. Now Ulysses is making its second orbit of the Sun while the Sun is at its most active during solar maximum. As shown in the diagram on the right, Ulysses was close to its perihelion at 1.3 AU from the Sun and at 4°S latitude at the time of the 10th May event. During this phase of its orbit Ulysses makes a fast latitude scan from the south polar regions of the heliopshere to the north polar regions in less than a year.

CMEs are often spectacular eruptions of material from the solar atmosphere, particularly common during solar maximum, which propagate outwards into interplanetary space. The image of the 7th May CME shown in the picture above was captured by the LASCO coronagraph instrument on the SOHO spacecraft as it erupted from the west limb of the Sun (the right side as seen from the Earth). Spectacular movies of the event can be downloaded from the LASCO website from the C2 coronagraph and C3 coronagraph. The westerly direction meant that the CME was not heading towards the Earth but, as shown schematically in the picture, this was the perfect direction for the event, travelling at about 900 km/s, to pass over Ulysses on 10th May. Superimposed on the picture is a trace of the magnetic field strength recorded by Ulysses as the event arrived. The first signature was a shock wave driven ahead of the CME which arrived at 0036 hrs causing an instantaneous increase in the field strength. The field then continued to increase to reach its maximum of 35 nT just after 0600 hrs, to be immediately followed by a region of very dense plasma, at about 100 particles per cubic centimetre also the highest density recorded by Ulysses. Such a high density region may be the remnant of a solar prominence, a structure which would previously have been held stable above the Sun's surface by loops of magnetic field prior to the eruption of the CME.

Quoted in ESA's Science News, Prof André Balogh, Principal Investigator of the magnetometer team at Imperial College, said "We now want to follow the way the different magnetic loops raced out from the Sun so that we can understand the complexity of this CME. Looking at the SOHO images and our magnetic field data, we can only admire its complexity, which was beyond anything you will read about in a text book."

Members of the Imperial College Space & Atmospheric Physics Group and Queen Mary and Westfield College's Astronomy Unit recently discovered that on May 1, 1996, the Ulysses spacecraft crossed the tail of Comet C/1996 B2 (Hyakutake).