Background to the Research 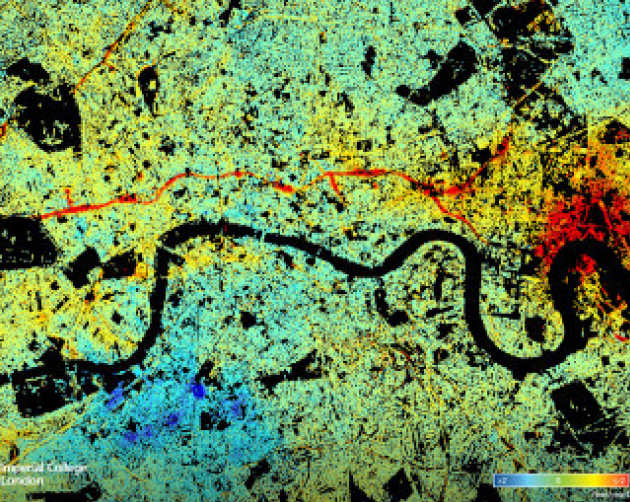 Permanent Scatterer Interferometry (PSI) is increasingly used a cost-effective tool for monitoring large infra-structure projects such as Crossrail. The technique uses information of the phase signal recorded in synthetic aperture radar (SAR) acquisitions to measure mm-scale ground movements, in case of PSI a stack of radar acquisitions is used to extract a deformation time series for point targets (permanent scatterers) on the ground (2001 Ferretti et al., 2011; 2014 Ferretti). A tutorial by 2013 Moreira et al. gives a comprehensive introduction to the basic concepts of synthetic aperture radar and 2016 Osmanoǧlu et al. review the advantages and limitations of several InSAR processing algorithms.

The area of Greater London is ideal to test the limits and potential application of PSI for several reasons. Firstly because of the data availability: its urban cover provides abundant permanent scatterers and there have been regular radar acquisitions from several sensors over the past 25 years. Secondly, London’s ample construction activity causes ground deformation on wide range, both vertically (1 – 100mm) and laterally (from single structure to regional ground deformation), which are often monitored with ground-based methods which can provide validation for the PSI measurements.

Furthermore there is a unique opportunity to improve the understanding of London’s geology. It is recognised that faults exist in London but are not mapped well enough (2013 Aldiss) and it is thought that the majority of major faults in London act as barriers to ground water flow (2017 Environment Agency UK). The correlation between PSI measured ground deformation and London’s aquifer has been investigated previously (2015 Cigna et al.), however not considering the higher magnitude water table related ground motion induced by dewatering activity. The major dewatering necessary for the construction of Crossrail caused a subsidence pattern correlated to the cone of water abstraction clearly visible in the PSI data, however it contains intriguing anomalies, which are potentially correlated to anomalies in the underlying rocks.

This project aims to investigate two broad application fields of PSI in London, firstly concerning infrastructure monitoring and secondly how the PSI data can be related to London’s geology.

The objectives for investigating the infrastructure monitoring include:

• To provide guidance to which choice of satellite sensor is appropriate for which application in infrastructure monitoring, specifically comparing the PSI results from X-Band (TerraSAR-X) and C-Band (Sentinel-1). Blackfriars Bridge and Crossrail’s Bond Street Station serve as case studies for local, site-level monitoring, whereas the impact of dewatering on the Limmo peninsula is used as an example for regional scale monitoring.

• To validate PSI measurements with ground-based monitoring data, which is achieved mainly with the publicly available data from the Crossrail Learning Legacy project and the long-term monitoring programme for the Jubilee Line extension.

The second part, concerning PSI data and its use to understand London’s geology, will focus on the area around the Limmo Peninsula in East London. The objective is to improve the understanding of how the ground reacts to changes in the water table in London’s chalk aquifer and based on that attempt to interpret the anomalies found in subsidence patterns related to dewatering.