Research pursued at Imperial College over the years cover a range of fundamental as well as applied topics, with recent studies tending to be more fundamental in nature. This research builts upon efforts and projects directed since the late 1970s by Prof. Leschziner at UMIST (Manchester), Queen Mary University of London and since 2001 at Imperial College (see publications).

The summaries given below, which are preceded by links to somewhat more detailed overviews, intend to convey a flavour of the research undertaken since around 2000.

Research activities in recently completed or current research projects are listed below, including summaries that may be accessed upon clicking on the blue underlined links. 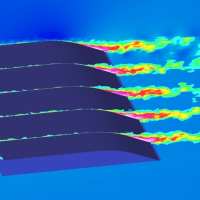 This work focuses on the development of hybrid and zonal RANS-LES strategies for high Reynolds-number near-wall flows, where resource constraints prevent the use of full near-wall resolution.

The emphasis is on separated flow of practical significance. Alternative approaches are tested over a range of conditions and geometries. 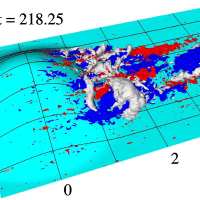 The aim of this research is to identify the effects of near-wall resolution on the fidelity of simulating the refined near-wall physics of separation from 3d continuous surfaces.

The aim of this research is to explore current capabilities of LES and the challenges it faces when applied to complex flows separating from high-sweep, high-incidence wings.

The emphasis is on issues of meshing, near-wall resolution, computational cost and physical fidelity, the latter by reference to LDA data obtained at the University of Manchester especially for the simulation studies. 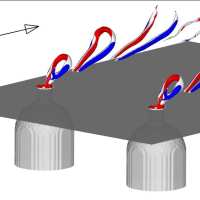 R4: Simulation of Synthetic Jets in the context of controlling separated flows

This research investigates, by means of simulation methods, the physical phenomena arising from the injection of periodic, “synthetic” jets into boundary layers, both attached and separating.

In a synthetic jet, fluid is injected for one half of a period and then extracted for the second half, the net mass-flow rate being zero. The motivation is to avoid separation from streamlined bodies subjected to high loading without the need for net mass-flow supply. Both slot and round jets are examined.

The aim of this project has been to develop models, within the RANS/URANS environment, for steady and unsteady bypass transition on blades, the primary target being unsteady wake-blade interaction on low-pressure gas-turbine blades.

A key activity has been the formulation an approach that combines an anisotropy-resolving turbulence model with a transition model which accounts for the substantial pre-transitional fluctuation energy observed in transitional boundaries before turbulence sets in.

This research builds on work in R5 that examined the capabilities of newly developed turbulence and transition models for highly loaded blade flows and wake-blade interaction.

Current efforts focus specifically on modelling laminar separation, following by free-shear-layer transition, and on identifying, within the URANS environment, the effectiveness of synthetic jets to control separation from blades.

Building on earlier efforts on the modelling shock-boundary-layer interaction with second-moment closure, this computational study investigates the capabilities of second-moment closure models for compressible cold and hot jets, including the modelling of the effects of compressibility and shocks on the behaviour of under-expanded jets issuing from jet-afterbody configurations.

Experiments serving validation are being performed at the University of Loughborough. 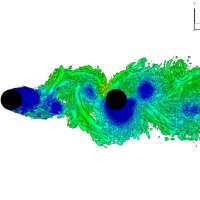 This study is related to ongoing efforts to simulate aircraft-undercarriage flows. It targets the physics of vortex shedding from bluff bodies, the breakdown of these vortices into turbulence and the interaction between these turbulent vortices and a second bluff body in the wake of the first.

The particular emphasis is on understanding the turbulence and inter-body interaction phenomena and identifying the computational parameters that secure high-fidelity LES for flows separating from cylinders. 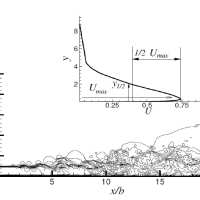 R9: LES studies o the interaction of a free shear layers with a proximate wall in post-reattachment recovery and a plane turbulent wall jets.

In a series of simulation studies, the interaction between free shear layers, following separation, and near-wall layers has been investigated.

Of particular interest has been the identification of common features and processes that link interactive shear layers in wall jets with analogous pairs of layers in separated flow, with par ticular emphasis on the post-reattachment region.

This commonality is investigated, principally, by reference to comparisons of Reynolds-stress and turbulence-energy budgets.

Researchh identification of periodic or nearly periodic, energetic structures, embedded within a complex, multi-scale turbulent field, is a non-trivial exercise.

In this strand, unconventional approaches, including Proper Orthogonal Decomposition and Recurrence Mapping, the latter borrowed from dynamical systems theory, are developed and applied.

The reduction of frictional drag is of major interest in civil Aeronautics, because of its impact on fuel consumption and CO2 emissions.

This research investigates, by means of simulation and reduced-order modelling, the consequences of imposing spanwise periodic wall motion on near-wall turbulence and hence drag. 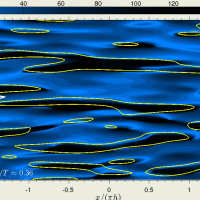 These modify significantly the small-scale structure much closer to the wall, with important implications to the turbulence statistics near the wall and the drag. Studies under this heading analyse DNS data with the objective of gaining insight into the mechanisms of the outer-inner interactions. 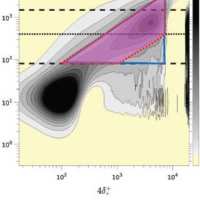 The structural characteristies of near-wall turbulence inferred from spectral properties

Structural properties of eddies in the log layer inferred from spectral statstics (EADS, EU). Turbulent boundary layers contain eddies with a range of length scales. Within this spectrum, there are identifiable subranges with distinct properties.

The larger eddies are assumed to be "attached" to the wall and to have a size linked to the wall distance.

This research examined DNS data for channel flow in an effort to characterise, statistically, the properties of eddy-size sub-ranges and to answer the question of whether the "Attached Eddy Hypotheis" is valid in the logarithmic velocity layer. 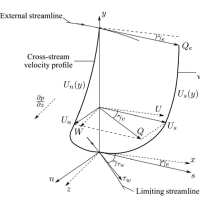 The near-wall region of three-dimensional flows is usually characterised by a high level of velocity skewness ("twisting").

This complex strain field results in turbulence interactions that are very difficult to model with approximate RANS-like near-wall approximations that are used as part of LES-RANS hybrid schemes. To facilitate the development of improvednear-wall RANS formulations, direct numerical simulations have been performed for boundary layers that are being skewed by the imposition of transverse pressure gradient.

The DNS data derived thus provide insight into the relevant turbulence-strain interactions and a database for validating RANS-like near-wall models.