ATR-FTIR spectroscopic imaging is an approach that, when applied to the medical condition of atherosclerosis, could reveal vital information into a disease that remains the primary cause of mortality in all developed countries. The ability of chemical imaging seeing the unseen with the naked eye and to decipher the presence and composition of fat lesions is crucial in understanding of atherosclerosis and the specific effect of diet on fat lesion. 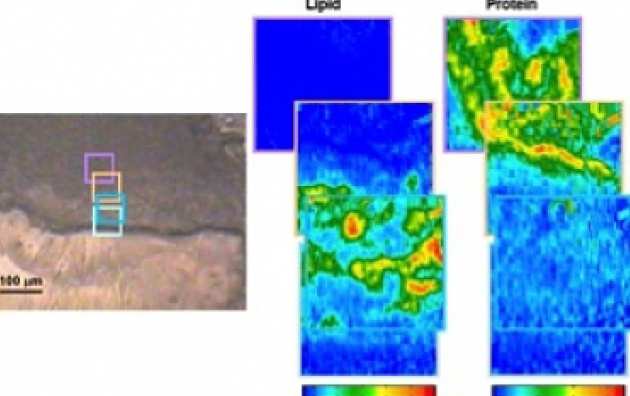 Spectroscopic imaging used in our study can reveal composition of the fat lesions (for example, distinguish free cholesterol and cholesteryl esters). This is important for understanding of the role that these substances play in disease progression. Quantitative information about the distribution of these substances is important for quantitative comparison of the effect of diet in mature and immature rabbits on the evolution or prevention of disease. Spectroscopic imaging was also able to differentiate between the various protein-rich components within the arterial wall which is also important in assessing the effect of atherosclerosis on arteries. The effect of diet and age on the composition of the fat-rich atherosclerotic lesions was studied with micro ATR-FTIR imaging, which is of key importance in understanding the evolution of the disease, may have clinical implications in studying and treating the disease in humans.

Another recent study in collaboration with Cornell University (Prof.R.Upmacis), by using spectroscopic imaging has provided the evidence for changes in the secondary structure of proteins (because of nitration of proteins) as result of atherosclerosis, which was a significant finding (Analyst, 134, 1107, 2009). This occurs due to the presence of large amount of NO indicative that effect of NO may be rather complex.