Being among the first students at a new medical school in Singapore is an exciting journey into the unknown, says Jia Ying Tanoto Lim. 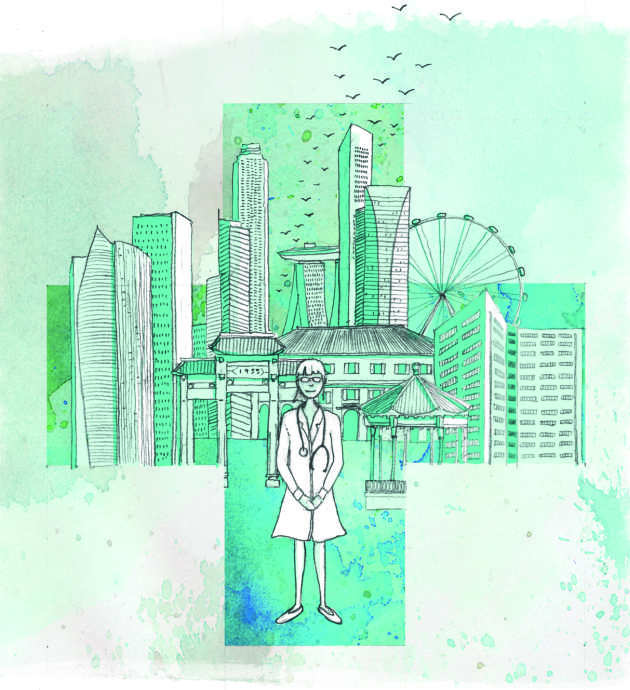 People often ask me why I decided to become a doctor; if there was a pivotal experience or defining moment that convinced me this was the path I wanted to take.

But for me there was no real epiphany — just a growing feeling that this was what I wanted to do, as I gathered experience volunteering and learned more about anatomy and biology at college. I particu­larly enjoyed working at a nearby nursing home for the elderly. I really enjoyed talking to the residents and listening to their stories. Many of them were really happy, content in the wisdom of their later years, and with so much still to contribute. But of course some of them were in poor physical health and I didn’t know how to deal with their medical needs properly.

I think because of my experience there, I definitely I favoured a more hands-on approach, so LKCMedicine seemed like the natural choice when it came to applying. It offered things other medical schools didn’t, like early clinical exposure and simulated surgery. Plus, LKCMedicine was set up by Nanyang Technology University and Imperial College London, in part to address the medical needs of Singapore’s growing elderly population, so that fits nicely with my own philosophy.

At the deep end We only started at the School in August 2013 but already, nine months in, we’ve spent time at the Tan Tock Seng Hospital — the busiest accident and emergency department in the country. It was the sole treatment centre for the SARS epidemic that struck the country in 2003, so there’s an awful lot we can learn just by observing and following.

We shadowed doctors in the general medicine department, learning how tuber­culosis spreads. You begin to realise that there’s much more to medicine than just the biological disease and symptoms, you have to address the other outside influences and circumstances such as living conditions and medication compliance. You can’t just assume patients will always take their medicine, which I think as students you take for granted.

We were also fortunate in being able to perform cardiac ultrasound on a simulated patient during one of our lab practicals. We had to learn how best to orientate the probe to get different views of the heart in order to see the valves opening and the chambers contracting. To be able to visualise the heart as more than a static 2D image in our textbooks is so helpful.

I was also struck by one of the simulated surgery sessions we sat in on at Tan Tock Seng Hospital. It was intended to show what happens in the aftermath of a stabbing or puncture wound and how to deal with the associated haemorrhage and shock in the patient. It was interest­ing to see how the doctors and nurses work together in that emergency scenario, constantly asking questions of one another. That will be us, sooner than we think.

Trendsetters Being the first cohort of students in a brand new medical school has its advantages and disadvantages. There’s no mentorship from our elder peers or junior doctors who have been through the school. But we don’t feel like orphans – there’s plenty of support!

Plus we get to decide the new traditions of LKCMedicine and see the culture of the school grow. We set up the LKCMedicine Society, which helped with the decoration and furnishings of the student lounges at the Mandalay and Yunnan Campuses, where we often eat lunch together.

We’ve also decided to create a house credits system, where the five houses compete in friendly games such captain’s ball (a popular game in Asia similar to basketball), soccer and we even have a planned cookery competition coming up.

Occasionally we’ll invite the staff to play or join in with us, which is fun and interesting to see them out of the class­room. I think they enjoy it too. It’s all quite new for them as well and we’re all on this journey together.

Based on an interview with Jia Ying Tanoto Lim, who is studying for an MBBS at Lee Kong Chian School of Medicine.