Enlarging mental horizons: the history of humanities at Imperial

From its founding in 1907, for four decades the Imperial College of Science and Technology provided little or no formal teaching in humanities subjects. Of course, students engaged in these subjects in informal contexts, such as in clubs and societies, and their own time, as H.G. Wells had done at when at the Normal School of Science, but something was lacking. One later survey conducted of former students at Imperial between 1929 and 1963 concluded that they would have liked more opportunities to formally study humanities and languages.[i]

As in similar institutions, this changed after World War Two. Like the wider scientific community, Imperial emerged from the war emboldened by its potential for both elevation and destruction.

Regard your knowledge and your skill always in the light of a trust for the benefit of humanity, and thereby ensure, so far as in you lies, that science may never be put to uses which offend the higher conscience of mankind."

remarked at an address to the College in 1945 [ii]

In order to encourage Imperial students to think about these wider ethical and social issues, in 1947 Imperial embarked upon a series of lectures named ‘Ends and Means’.

Introducing the lecture series, Roderic Hill, then Rector of Imperial College, remarked that the lectures were "intended to stimulate the imagination and enlarge the mental horizon of staff and students working in fields of science and technology [other than their academic specialisms].

Scientific discoveries, whether regarded as intellectual progress or as contributions to the advance of technology, are destined for the enlightenment and benefit of man. The weavers of the pattern of pure and applied science are human beings. Education of scientists or engineers which overlooks the relevance of human relations is short of one indispensable ingredient." [iii]

The ‘Ends and Means’ lectures were followed by two initiatives. In one, a programme named ‘Touchstone’, launched in March 1950, participants gathered for weekends at Imperial’s Silwood Park campus to discuss subjects such as ethics, philosophy, art and design, and psychology.

A parallel development was the launch of the Imperial ‘General Studies’ lecture series in 1952. For many years, the series attracted distinguished speakers from diverse walks of life. For example, in 1963 one speaker was Harold Wilson, soon to be prime minister, who discussed the British political scene, and soon returned to Imperial to deliver one of his famous 'White Heat of Technology' speeches. [iv]

Over the years, this provision was also augmented by a number of related units, such as the history of science, industrial sociology, languages, management, and operational research. The electrical engineering department built up a particular specialism in this area, in 1963 employing Sinclair Goodlad, a sociologist, to teach regular classes in humanistic, social and economic studies. Goodlad later went on to write scholarly studies of higher education institutions and the integration of humanistic topics into science and engineering education.[v]

By the late 1960s, student interest in humanities topics had grown considerably. One survey of Imperial student attitudes indicated strong student support. Of a sample of 1,060 students (nearly 50% of Imperial undergraduates), 96% of respondents replied that they would like non-technical courses to be made available, and 73% wanted such courses to carry credit in their science or engineering degree. Within this sample, respondents sought courses in economics (50%), psychology (43%), philosophy of science (34%), industrial sociology (29%), communications (25%), literature (25%), German (24%), politics (22%), moral philosophy (20%), and history of science and technology (17%).[vi]In 1973, existing provision was merged into the ‘Associated Studies Department’ and by the late 1970s some academic credit was being given to students undertaking these programmes. In 1978, the Department for Social and Economic Studies was founded, with Dorothy Wedderburn as its first head, and Audrey Silberston in its first chair of Economics.[vii]

Humanities courses available in the 1980s included a number of history of science and technology courses, modern literature and drama, philosophy and philosophy of science, politics, communication of scientific ideas, and science in society. Those provided by the Department of Social and Economic Studies included industrial sociology, macro-economic policy, technology and society, and accounting and finance.[viii]

Imperial has also long-provided foreign language education for its students. By the 1980s, Imperial’s focus was teaching French, German and Spanish. As these contemporary images indicate, Imperial’s language classes have been, as they are now, a site of educational innovation. 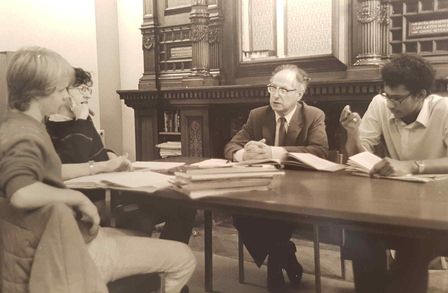 David Raphael teaching. In the 1980s, the Humanities Department was based in the impressive college buildings at Prince’s Gate. 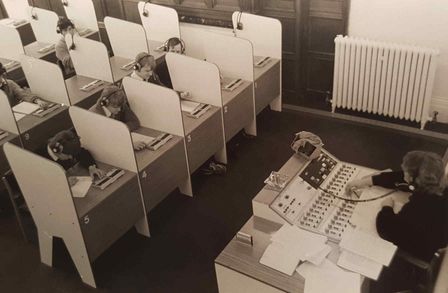 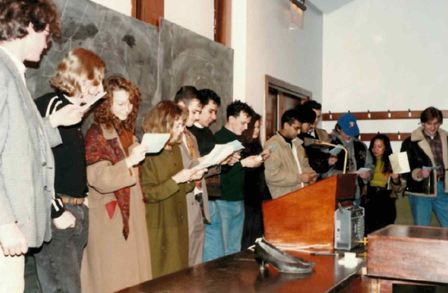 Rehearsal for a play written by Anna Nyburg for her Italian beginners class (early 1990s).

This provision was augmented in the early 1990s by the creation of the Science Communication Group.

In an echo of Roderic Hill’s statements seven decades prior, the latest iteration of humanities at Imperial is the Imperial Horizons programme, which launched in 2012. It is located in the Centre for Languages, Culture and Communication. The centre’s current director is Dr Ana Costa-Pereira.

As the Imperial Horizons mission statement reveals, the wide-ranging programme ‘is designed to broaden your education, inspire your creativity and enhance your potential’.[ix]

In some ways, Imperial Horizons fulfils the wishes revealed by the 1969 student survey. Indeed, students’ desire for learning humanities alongside their regular studies, for degree or extra credit, is even more popular than it was then.

As we continue to implement Imperial’s Learning and Teaching Strategy, and move towards the launch of the I-Explore programme in 2019, we also look forward to opening a new chapter in Imperial’s long and rich history of intertwining of scientific and engineering education with humanities and related subjects.

[v] E.g. Sinclair Goodlad, ‘The Search for Synthesis: Constraints on the development of the humanities in liberal science-based education’, Studies in Higher Education, 25:1 (2000), 7-23.

CLCC has published an Annual Report since 2016. Learn about the Centre's most recent history by browsing the reports, below.