From the interactions between molecules to the organisation of large structures, the Materials theme aims to predict and optimise technological processes or product applications.

Materials science is a highly interdisciplinary field of chemical engineering, covering the design, discovery and application of new materials.

This involves the evaluation and manipulation of useful properties in different substances in order to expand new materials that feature unique characteristics used for the development and fabrication of revolutionary new products.

Examples range from battery materials to drug delivery, each made useful through a unique blend of specific properties.

Research centres and institutions associated with this theme include the BP International Centre for Advanced Materials, the Barrer Centre and SynFabFun.

A Film about Films: Membranes Research at BP-ICAM

Researchers at the BP International Centre for Advanced Materials (BP-ICAM) are taking on the challenge of creating more efficient membranes with the potential for new applications.

A Film about Films: Membranes Research at BP-ICAM

Researchers at the BP International Centre for Advanced Materials (BP-ICAM) are taking on the challenge of creating more efficient membranes with the potential for new applications.

Do the silica shake

A new non-Newtonian fluid: goo that goes from liquid to solid when shaken

bp’s collaboration with Imperial College London has shaped research programmes, facilitated industry-academia debates and involved testing novel approaches to new disruptions.  Since 2014 the partnership has resulted in the co-authorship of 23 journal and conference papers and strong connections with academics from nine of Imperial’s departments including the Department of Chemical Engineering.

Over many years the research at Imperial has made a significant contribution to bp’s capabilities across Upstream and Downstream technologies in the areas of energy storage, multi-phase fluid flows, computational fluid dynamics, systems engineering and much more.

In a recent project with bp, scientists from Imperial’s Department of Chemical Engineering at the BP International Centre for Advanced Materials (bp-ICAM) took on the challenge of creating more efficient membranes with the potential for new applications.

In particular, researchers developed a cost-effective method of biofuel extraction which could make biofuels viable alternatives to fossil fuels in transport.

Biofuels are more expensive than petrol and diesel because traditional conversion processes that extract fuel-grade biobutanol from biomass fermentation are energy intensive and low-yield.

The Livingston Group at Imperial College London developed a new solution to this which could revolutionise the way biofuels are produced, paving the way for their widespread use in transport and aviation.

In collaboration with bp they developed a membrane-based extraction system which uses less than 25 per cent of the energy of current processes and produces ten times more biofuel with over 99.5 per cent purity.

Professor Livingston said: “Our new technology could help to drive down the cost of biofuels so that they eventually replace fossil fuels in transport and aviation – a much happier situation for the environment and one we are all working towards.”

Biofuels are produced by fermenting waste biomass and recovering the fuel from the fermented solution using an extractant. However, both biofuels and extractants are toxic to the necessary microorganisms in the solution, so can inhibit production and increase energy consumption.

In their labs at Imperial, researchers investigated the performance of several thin-film composite membranes and settled on one which can block the transport of extractant and water, allowing only the biofuel to travel through. They found that this protected the microorganisms and enabled continuous production, resulting in a ten-fold increase in productivity compared with conventional techniques.

This is part of an Imperial News Story. 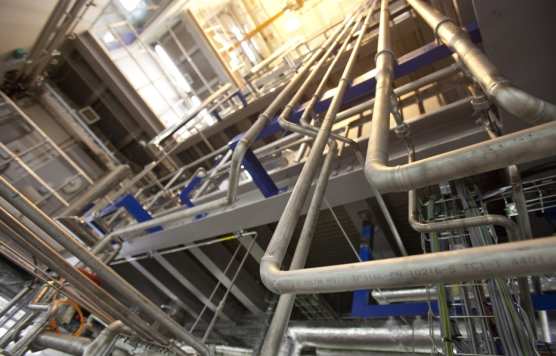