Each year The Worshipful Company of Paviors in conjunction with the Department of Civil and Environmental Engineering, Imperial College London and the Institution of Civil Engineers present the Annual Paviors’ Lecture. This series of lectures was started at City University in 1975 and transferred to Imperial in 2000.

In an Ashes year it seems appropriate to have an Australian Engineer to deliver the Paviors’ Lecture. Andrew Bowen will talk about the £1.5b London Gateway port project with which he has been involved for the past 14 years. His lecture will cover the planning, design and construction phases before focussing on operational aspects, which involve a high degree of automation, the rationale for which will be explained. The port is one of the most advanced container terminals in the World and presents a good example of the digital world in which today’s civil engineering is practiced. The project was delivered on time and within budget.

Andrew graduated in Engineering from The University of Queensland in 1990 and obtained a Masters’ Degree two years later. He subsequently worked in over 30 countries with extended periods in the UK, Thailand, Argentina, Malaysia and India for the international consulting engineers, Cullen Grummitt and Roe, specialising in port and harbour works and particularly container terminals. This exposed him to design, feasibility studies, project management and supervision. Andrew joined the London Gateway project in 2004 and has held various positions through the development of this project including Engineering Director and now Port Operations Director.

The Lecture will provide an overview of Europe’s biggest infrastructure project and the challenges that come with constructing 26 miles of tunnels and ten new stations in central London. He will discuss how the new railway will change the way that people travel around the capital, the broader benefits of the Crossrail project and the importance of continued investment in UK infrastructure.

This year’s lecturer is the Chairman of Crossrail, a position he was appointed to in 2009. Sir Terry Morgan is, therefore, in a key position to describe this huge and very challenging construction project and its implications for travel in and through London. At a cost of nearly £15bn, it will provide connections between Reading and Heathrow Airport in the west via the West End, the City and Canary Wharf to Stratford and Shenfield in the north east and to Woolwich and Abbey Wood in the south east.

Prior to his present appointment, Sir Terry was Chief Executive of Tube Lines and his earlier experience was with BAE systems and the Rover Group. He is a Fellow of the Royal Academy of Engineering and of the Institution of Electrical Engineers. In addition, he is Chairman of Ricardo plc, London City Airport and Crossrail International. Sir Terry currently serves on the Councils of the University of Birmingham and Heart of the City as well as the Growth Delivery Board for HS2.

Dana will trace the history of London’s streets in the context of the overall city infrastructure and reflect on changing attitudes to safety, care and reliability. She will then address the management of London’s streets today and into the future against the background of a case study entitled, ‘Safe, reliable and cared-for streets

This year the Paviors’ Lecture will take the audience back to the grass roots of the Livery Company as it focuses on the maintenance and management of London’s roads and streets. Dana Skelley is Asset Management Director at ‘Transport for London’ (TfL) and carries the responsibilities for which the Paviors’ Company was constituted in the 13th Century but today on a far larger scale. This involves not only roads but footpaths, tunnels, bridges and traffic lights. She leads a team of about 450 engineers. Dana joined TfL in 2000 after working at London boroughs following an engineering degree and subsequently an MBA. In addition to her professional duties, she has put considerable effort into encouraging and supporting women in engineering. She was awarded an OBE in 2015 for her services to transport in the UK and the Paviors’ Medal for Excellence in 2016.

The lecture will characterise London’s growth and how the Underground has enabled the city’s meteoric expansion. It will also explore current infrastructure schemes and the challenges of delivery whilst keeping London moving. Finally, future challenges for London and its Tube and how technology and innovation might influence the city’s future will be addressed.

Miles Ashley began his career setting out the centre line of the M25 Motorway in Leatherhead whilst working for Balfour Beatty. He graduated in Civil Engineering at Kingston and worked for Lovell Construction across a wide range of projects, eventually managing the company’s business with London Underground and Railtrack. In 2000, he was appointed MD of Heritage Property Group and joined the board of project manager, Clarson Goff Ltd.

Today Miles is ‘Programme Director Construction’ for London Underground and very much enjoys grappling with complex urban projects including the Northern Line Extension and the stations at Tottenham Court Road, Bond Street, Victoria and Bank.

He is a Fellow of the Institution of Civil Engineers, of the Royal Institution of Chartered Surveyors and of the Royal Society of Arts. Miles is a Member of the Treasury Infrastructure UK Client Group and has led work on alternative delivery models and risk. He was also part of the team that developed the Treasury’s Infrastructure Procurement Routemap.

Some things have always been true about large engineering projects. When they are being planned, financed and designed, they are considered unwanted follies that nobody will use. When they are being built, everybody complains about the disruption and the length of time it takes. Once a project is finished, nobody wants it closed for maintenance and there are complaints that it is too crowded. As professional engineers, we should not sit back and grumble about this situation but overcome it by taking a lead in creating a more resilient and sustainable world? The lecture discusses the changes which are required to bring this desirable situation about?

Keith Clarke trained and practiced as an architect before taking up a series of high profile leadership positions in the construction industry, culminating in his appointment as CEO of W S Atkins in 2003, a post which he occupied until 2011. He is currently Vice President of the Institution of Civil Engineers with responsibility for learned society activities. His earlier career involved design and development leadership for 8 years with the New York City Public Development Corporation and 4 years with Olympia and York. Between 1989 and 2003 Keith was appointed to successive positions as CEO of Trafalgar House Construction and of Kvaerner Construction, followed by his appointment as Executive Vice President of Skanska. He currently holds several non-executive positions and is an Honorary Fellow of the Royal Academy of Engineering and of the Institution of Structural Engineers. He is a Visiting Professor at Imperial College, involved with their Built Environment Innovation Centre, and also at Aston University. He has long been an advocate for Carbon Critical thinking in design and construction of the built environment which was the theme of his ICE Brunel Lecture delivered at various venues around the World.

The Highways Agency’s role has changed in recent years from the construction of new roads to focusing on managing and maintaining the existing strategic network. This revised role has required changes in technology and organisation in order to give an improved level of service to the road user with an emphasis on consistency and reliability of journey times. Ginny will describe this evolutionary change and explain how the HA will support future sustainable economic growth.

Ginny Clarke has had a long career in the field of roads engineering since she graduated in 1976 with a degree in civil engineering. She has just taken over a new role as Director for Strategy and Planning for the Highways Agency. Her responsibilities are to lead the transition of the Agency to a public company and develop the planning and investment strategy required to support the long term government commitment to the strategic road network.

Ginny was formally the Chief Highways Engineer for the Agency for 12 years, during which she was the UK First Delegate to the World Roads Association for seven years. In 2009 she was awarded the CBE for services to the Highways Agency and was subsequently appointed a Fellow of the Royal Academy of Engineers in 2011. Ginny is also a Fellow of the Chartered Institution of Highways and Transportation and a member of the Institution of Civil Engineers.

Andrew will outline the characteristics of high speed rail, drawing on half a century of experiences from around the world. He will then go on to discuss the reasons why high speed rail is going ahead in Great Britain at the present time. Andrew will then describe how plans have been developed specific to our needs and what they would mean for relationships between cities in the coming century. He will also describe the engineering and construction challenges of achieving the government’s aims in the most densely populated country in Europe.

Andrew McNaughton has been engaged in railway construction, operation and management since 1973 and is currently Chief Engineer and Technical Director of High Speed Two Ltd, developing the principles, network and specific route design for high speed rail in Great Britain. From 2001 to 2009 he was Chief Engineer of Network Rail responsible for the specification and development of the GB rail network, investment authorisation and overall system safety management. Andrew has been Vice Chair of the EU Transport Advisory Group and of the European Rail Research Advisory Council. He is a Special Advisor on rail to the Australian Government and has lectured widely on the transport, land use and economic planning effects of rail development. Andrew is a fellow of the Royal Academy of Engineering, the Institution of Civil Engineers, Royal Geographical Society and Chartered Institute of Logistics and Transport. He is also an Honorary Professor of Rail Engineering at the University of Nottingham and a Visiting Professor of Engineering at both Imperial College and the University of Southampton.

In his lecture, Ken will take a candid look at the journey towards sustainability in building, including the pitfalls and triumphs encountered along the way. He will analyse the current world situation and anticipate the direction which architecture could take in the future, without the need to compromise artistic integrity.

Ken Shuttleworth is the Founding Director of Make, the architectural practice that he set up in 2004 after 27 years with Foster and Partners. During this earlier period, he worked on some of the world’s most iconic and ground-breaking buildings, including the HSBC building and Chek Lap Kok airport in Hong Kong, the Carré d’Art in Nimes and the Al Faisaliah development in Riyadh. His work in London has involved several notable projects including the Swiss Re Tower, known as the Gherkin, the Citibank headquarters at Canary Wharf, the Millennium Bridge, the Albion Riverside development in Battersea, Sainsbury’s Head Office, the More London development at London Bridge and London’s City Hall.

Make has studios in London, Birmingham and Beijing and has won numerous projects across a wide range of sectors including retail, residential, commercial, education, health, sport and leisure. Several important educational and research building projects have been successfully completed, including the Old Road Campus Building and the Oxford Molecular Pathology Institute for the University of Oxford and three iconic buildings on the University of Nottingham’s Jubilee Campus. Other recently completed schemes include the Handball Arena for the London 2012 Olympics, The Cube in Birmingham and the Montpellier Chapter Hotel in Cheltenham.

Ken is a graduate of the City of Leicester School of Architecture and has received honorary degrees in recognition of his achievements from de Montfort, Westminster and Nottingham Universities. He is Liveryman of the Worshipful Company of Paviors and has been a CABE Commissioner and Chair of their Design Review Panel.

32nd Annual Lecture [2007]
The construction of the high-speed link from Dover to the new Terminal at Kings Cross, St. Pancras.
Mike Glover

27th Annual Lecture [2002]
The planning and design of the £2.Sbn Terminal 5 at Heathrow
Norman Haste OBE 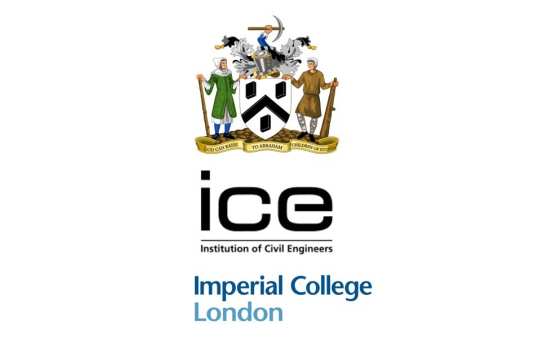