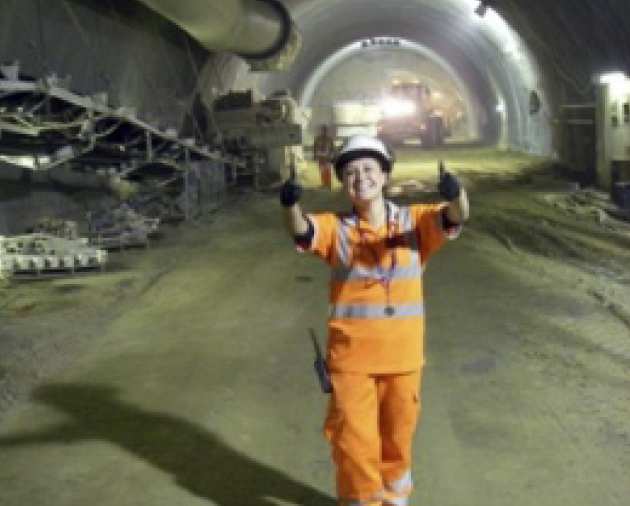 Lizzie completed her undergraduate degree in Geology in 2006 and after graduation began her career working for a civil engineering contractor, before joining geo-environmental firm Card Geotechnics in 2007 she then moved to Mott Macdonald in 2008. Her pre-MSc years were spent working on a variety of projects including railway embankments and working as an engineering geologist on the £370m A3 Hindhead tunnel – the longest non-estuarial road tunnel in the UK.

Her pre-MSc years were spent working on a variety of projects including railway embankments and working as an engineering geologist on the £370m A3 Hindhead tunnel – the longest non-estuarial road tunnel in the UK.However, Lizzie decided that in order to advance her career and gain more responsibility she needed to expand her geotechnical knowledge base and so in 2009 she took a sabbatical to complete the Imperial MSc course in Engineering Geology for Ground Models.

Since returning to Mott Macdonald, Lizzie has worked on a number of international projects including the Adjaristsqali Hydropower Cascade Project in southern Georgia, designed and supervised a ground investigation for a cable crossing of the Hooghly River near Kolkata in India, completed unlined rail tunnel inspections for the DART line in Ireland between infamous Bray Head to Dalkey, a geomorphological terrain assessment for a hydropower scheme in Panama and many more. Most recently, during her 7 months in Georgia her role involved the training and supervision of a team of local geologists and geomorphologists, mapping and assessment of landslide risk of over 120km, supervision support for local ground investigations, interpretative reporting generating ground models used in presentations to the Client and the Georgian government.

UK based projects have included the high profile Crossrail, HS2 and the Thames Cable Car projects. On the course she says “It was an excellent course, I learnt a lot and the links with industry were plain to see. I’ve made some great friends from the MSc., some of whom live overseas in Europe, Australia, New Zealand, Asia and North America as well as some who stayed closer to home by joining me at Motts!”