Strong earthquakes are a global issue that can threaten the safety and economic prosperity of urban areas with significant seismic activity. Such events produce seismic waves that interact with the foundations of structures and the surrounding soil medium, while the structural response imposes new waves to the foundation soil. This interaction between soil and structures creates a complex wave field underneath structures. This phenomenon is termed Soil-Structure-Interaction (SSI).

SSI phenomena can affect significantly the structural response. This can be proved by comparing a structure fixed at its base which does not account for SSI effects and a soil-structure system which takes into consideration the soil compliance. SSI phenomena usually increase the natural period and the damping of the soil-structure system. For this reason, the accelerations imposed on structures are smaller and the structural motion is damped faster for a soil-structure system than for a fixed base structure. This is the reason why SSI effects are often considered beneficial and current code provisions (e.g. Eurocode 8) allow the omission of the SSI phenomena in design by considering full fixity at structures’ base. However, Mylonakis and Gazetas (2000) showed that SSI effects can be detrimental under certain circumstances and their omission can be unconservative. The current design provisions suggest simplified approaches for taking into account the SSI phenomena, but they are inadequate to reproduce the damping of the system realistically.

The SSI phenomena can be studied by 3D numerical models that account for the soil compliance, soil non-linearity, energy damping and structural response. However, such models are limited in the literature (Chao, 1996; Amorosi, Boldini and di Lernia, 2017) due to the simulation complexity and the high computational cost.

The numerical model will be validated against real scale experiments which were undertaken in collaboration with the Aristotle University of Thessaloniki (AUTH). These experiments consisted of a framed structure (3x3x5m), shown in Figure 1, that has been imposed to forced and free vibration tests over a wide range of induced frequencies and load magnitudes. The design of the structure allows easy reconfiguration of the structural mass and stiffness that facilitates the investigation of the effects of the two structural parameters in the SSI phenomena.

The site where the structure is founded, is a well characterised site (Pitilakis et al., 1999; Raptakis et al., 2005; Pitilakis et al., 2014) whose soil stratigraphy and properties are known. More importantly, the site accommodates a permanent downhole array of accelerometers. These instruments record many earthquake events and they have gathered a large seismic data that enables a rigorous calibration of the numerical models of the free-field. During the experiments both the structure and the soil was instrumented with accelerometers and seismometers respectively, giving a large dataset of recordings.

The proposed experimental and numerical research programme has the dual aim of providing a better understanding of fundamental mechanisms associated with dynamic SSI problems, as well as to develop a novel, fully validated numerical analysis framework which other researchers and practising engineers can then follow to study dynamic SSI problems. 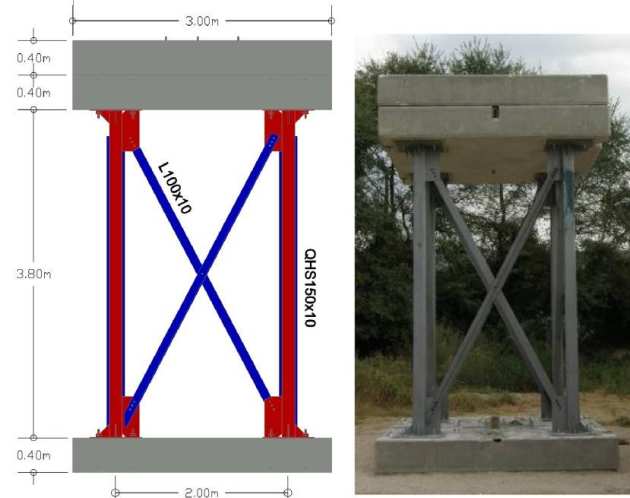