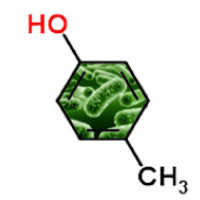 Whilst the liver is seen as the major organ for drug metabolism in the body it is often forgotten that the gut microbiotoa also undertakes a range of important biotransformations on drugs and pharmacologically active dietary products. In particular the gut microbiota are adept at reductive drug metabolism and this can be essential for the efficacy of drugs such as sulpasalazine which is a prodrug of  5-aminosalicylic acid used in the treatment of ulcerative colitis and inflammatory bowel conditions.  As well as beneficial effects the microbiota may cause toxicity by performing biotransformations, such as those seen with the bacterial hydrolysis of the glucuronides of the drug irinotecan  (used in the treatment of colon cancer). The major side effect of irinotecan is severe diarrhoea due to the hydrolysis of an inactive glucuronide metabolite by bacterial β-glucuronidases. This reactivates the drug in the gut resulting in toxicity but an inhibitor of these enzymes protected mice from this does limiting side effect. Awareness of the potential for the gut microbiota to be involved in drug metabolism is important as it provides a source of physiological variability between individuals with clear potential to affect the efficacy and toxicity of drugs via a range of mechanisms including the indirect modulation of the hosts drug metabolising systems via enzyme induction (or inhibition) or competition for drug metabolizing pathways. Such “drug-microbiome interactions” may have important consequences for both personalized medicine and drug toxicity.