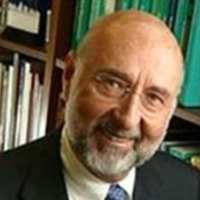 Stephen H. Davis, McCormick School (Institute) Professor and Walter P. Murphy Professor of Applied Mathematics at Northwestern University, received all his degrees at Rensselaer Polytechnic Institute (Ph.D. in Mathematics 1964). He has been Research Mathematician at the RAND Corporation, Lecturer in Mathematics at Imperial College, London, and Assistant, Associate Professor and Full Professor of Mechanics at the Johns Hopkins University. He was Editor of the Journal of Fluid Mechanics and is the Editor of Annual Review of Fluid Mechanics. He has authored over two hundred refereed technical papers in the fields of Fluid Mechanics and Materials Science, and has written a book “Theory of Solidification”. He has twice been Chairman of the Division of Fluid Dynamics of the American Physical Society, is a Fellow of the American Physical Society, member of the National Academy of Sciences, the National Academy of Engineering, and the American Academy of Arts and Sciences, is the 1994 recipient of the Fluid Dynamics Prize of the American Physical Society and the 2001 G. I. Taylor Medal of the Society of Engineering Science. More information can be found on Professor Davis's website.

As part of his Nelder Fellowship Professor Davis intends to organise an inter-departmental, weekly research conference on Interfacial Fluid Mechanics, an area in which he has made longlasting contributions over the years. He will give an opening plenary lecture, set out his vision of the field and will highlight the important open problems that remain unresolved in this area. The conference would aim at identifying new areas of study that are both important and tractable and will include talks by selected colleagues from the host institution and external ones.

Prof Steve Davis is with us for the next 4 weeks as a Royal Academy of Engineering Fellow and a Nelder Fellow (Dept. of Mathematics, Imperial College). The meetings will be in Roderick Hill C615.

Steve has volunteered to run a Fluid Dynamics Conference on the following four Fridays October 10, October 17, October 24 and October 31.

The idea is to get people from all areas of fluid dynamics across Imperial to participate in presentations and discussions of problems they are involved in. The format is informal and the presentations should not be of completed and submitted work, but rather of ongoing or developing ideas that can benefit from input from people with different expertise.

Place: Roderick Hill Building, Conference room C615 - 6th floor. This is the building adjacent to ACEX (Chemical, Aero) and Bone (Chemical) on the Prince Consort Road side. We will arrange to have the doors open without the need of swipe access.