A Twitter campaign to celebrate the diverse careers of female engineers at Imperial will take place on Tuesday 23 June 2015.

Imperial’s Twitter campaign is part of National Women in Engineering Day, which is a day dedicated to raising the profile and celebrating the achievements of women in engineering, such as Dr Susannah Maidment (main image). The Day was set up by the Women’s Engineering Society to celebrate its 95th anniversary. The aim is to celebrate the work that women do in engineering, and to showcase the great engineering careers that are available.

Dr Sandrine Heutz (below), Department of Materials, is taking part in the Imperial's #NWED Twitter campaign. 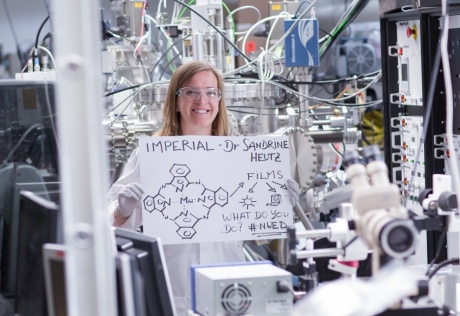 As part of the lead up to the event, the College’s professional photographer has been taking photos of a cross-section of female engineers in the Faculty of Engineering, with the engineers holding a placard that answers the question: “what do you do?” Undergraduate and postgraduate students, and academics at all levels, are being asked to contribute to the campaign by posting pictures of themselves to celebrate the work that they are doing in engineering. Engineers who work or study elsewhere including alumni and friends of the College, are also welcome to take part.

Dr Martina Wicklein (below) from the Department of Bioengineering is also taking part in the Twitter campaign. 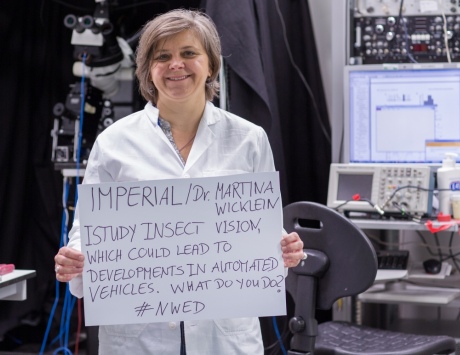 Dr Martina Wicklein said: “This campaign is a really simple and effective way to stand up and show our community and the world what we are doing in engineering. I investigate how insect vision could help us to make better controls for autonomous vehicles and I want budding engineers to know that work we do is so diverse and exciting. I am looking forward to seeing the other posts to learn more about what my colleagues are working on.”

Dr Angela Goode (below) from the Department of Materials also gets to showcase the Titan microscope in the campaign. 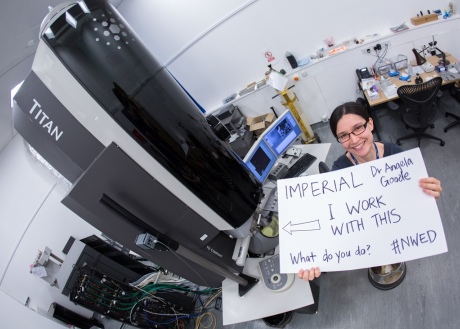 Female engineers at Imperial are also invited to a buffet lunch for National Women in Engineering Day, where they will be joined by the President Alice Gast.

To take part, ask someone to take a picture of you holding up a piece of paper or cardboard that includes a brief sentence that explains your involvement in engineering, followed by the “what do you do?” question. Make sure your Tweet includes the hashtags #ImpCol #NWED. Don’t worry if the image doesn’t look as professional as the ones taken by our photographer as the aim is to encourage participation. We want to show the UK just how diverse and cool engineering at Imperial is and inspire more people to think about it as a great career choice.

If you're not on Twitter, don't worry you can still join in. Please email your photo to cd.smith@imperial.ac.uk and we can Tweet it for you.

Female engineers in the Faculty have also been invited to attend a drop-in buffet lunch from 13.00 – 14.00 on 23 June. The lunch will be an opportunity to meet fellow female engineers as part of a celebration of everyone’s achievements and also an opportunity for the College to thank everyone for their contribution to Imperial.