Links to Off site working forms

Search under the Risk assessment forms tab for more forms

Fieldwork involves exposure to a wide variety of risks. For this reason, a rigorous risk assessment needs to be undertaken, documented and approved prior to the work commencing. You will need to complete the FW1 and the OWERP documents and potentially other risk assessments specific to the use of chemicals, radiation and biological agents as well as specialised or hazardous equipment such as chain saws, construction equipment and firearms.

An Imperial College employee was the regional fieldwork project coordinator (PC) for a disease Control Initiative for West Africa.  She was an experienced field worker and had visited Mozambique on several previous occasions.  She was travelling with a three-man team to a village site in the Macomia District, Cabo Delgado Province, of North Eastern Mozambique in a 4x4 Toyota Hilux.  The original convoy of two vehicles had become separated and the lead vehicle was over an hour ahead.  The College project coordinator (College PC) had elected to be the driver.

The vehicle hit a pothole - which was filled with sand - twisted at a 90 degree angle and the driver lost control.  The car rolled over numerous times, landing in a deep ditch running parallel to the road, coming to rest upside down.  The cab of the vehicle was significantly crushed resulting in intrusion into the passenger zone. 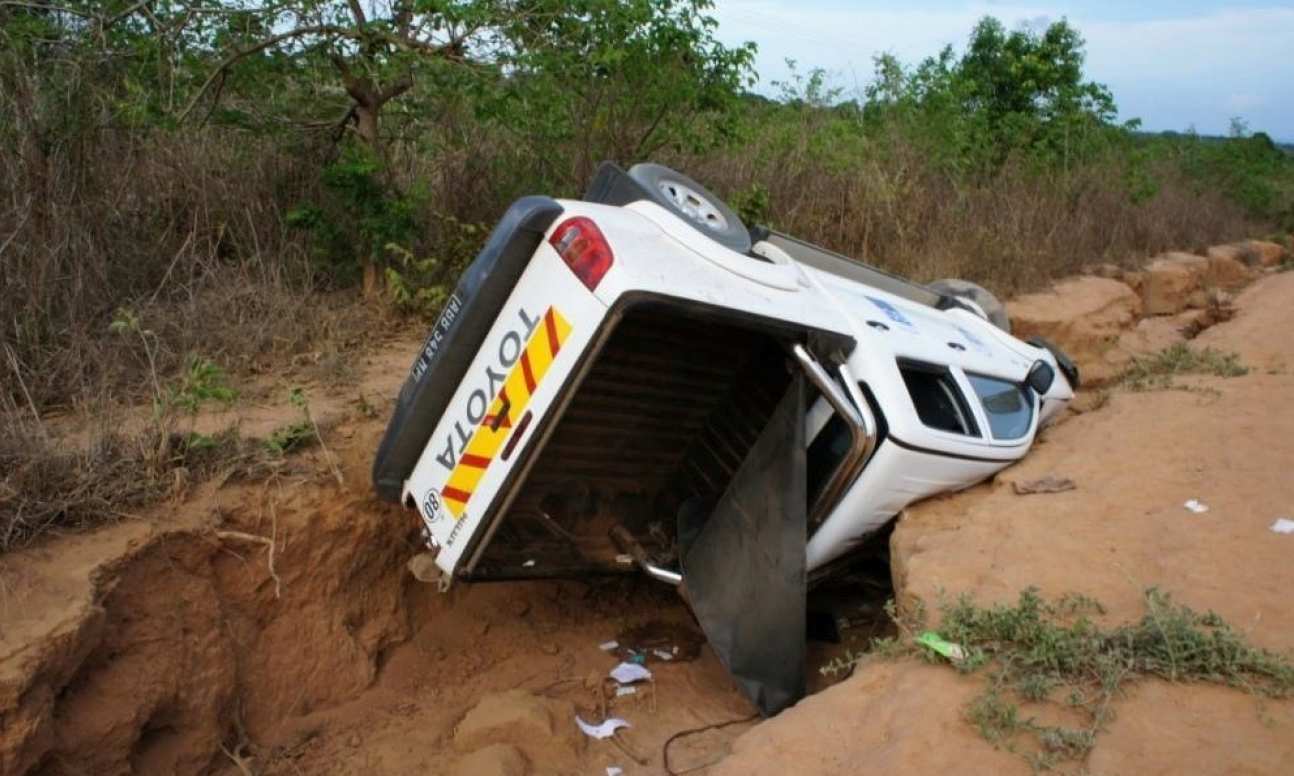 At the time of the incident the two rear occupants were wearing seatbelts but not  the two front passengers.  The two front occupants had head injuries, with the College PC being the most seriously hurt. The two rear passengers were bruised but did not require medical treatment.

Following the accident, an attempt was made to phone for help.  The team did not call the emergency services or the second team car because there was no phone signal.  After ~ 35 minutes the first vehicle to pass the scene was a motorcyclist who stopped.  The least injured passenger obtained a lift with the motorcyclist towards an area of better phone reception.

Approximately 30 minutes later the next vehicle to arrive at the accident was a passing truck, which stopped and offered the remaining members of the team a lift to a local hospital in Macomia.

The injured persons were treated at Macomia District Hospital. The College project coordinator required 8 stiches to the head, an MRI scan was recommended and a shoulder x-ray. The x-ray and MRI could not be performed at Macomia hospital.  The injured team had to make a further 3 hour journey back to Pemba in a local ambulance. The College PC was informed that she may require a blood transfusion, which was refused due to the risk of BBV contamination.

The risk assessment had identified key hazards and control measures but was not being fully implemented in the field.

Risk assessments are conducted for the benefit of the offsite team, to keep them from harm and maximise the amount of time spent in the field carrying out research.  If there are reasons why they cannot be implemented this needs to be communicated to the PI or PIC and the field work processes re-evaluated and / or alternative control measures considered.