The Great Exhibition Road festival is a 3-day festival held in July, where all the institutions that have a connection to Exhibition Road came together to present their research and artefacts to the general public. This year more than 60,000 visited the festival.

After the success of the Royal Society Summer Science Exhibition, TSM showcased Code for Creation at the festival, developing an old fashioned games arcade where visitors could explore the research conducted by the groups and investigate the conductive properties of graphene, build a fusion reactor and race against a Raspberry pi Artificial intelligence in a series of puzzles.

In February 2019 TSM took part in the Imperial Lates’ event ‘Smart technology’, which took place in London Fashion week and looked at how clothes and technology will become integrated in the future. The TSM group presented their research on Graphene and how it can be used in flexible technologie that can and will be integrated into clothing in the future. The group brought along ‘defect drop’ an arcade style game designed to show the properties of graphene and how these properties can be modified by adding ‘defects’ which alter the properties of the material making it more suitable for different tasks. Since it is so string, flexible and able to conduct electricity, it is a perfect material for integrating into clothing.

Since its founding in 2012, TSM have been involved in Pint of Science, hosting the Atoms to Galaxies events, bringing together some of the most cutting edge research from the Physics, Materials and Computing worlds.

The Imperial CREST Academy provides scientific mentoring and support to help students aged 16–18 successfully undertake and submit a project for a British Science Association CREST award. The CREST awards, dubbed the ‘Duke of Edinburgh Award in Science’, allow you to plan and carry out long-term science projects with guidance from a professional scientist.

The CREST Academy runs over the course of the academic year (October- July) with a symposium occurring at the start of the next academic year, where the students can present their results to their peers, mentors and members of staff. This year the annual student conference occurred on Wednesday 2nd October in the Blackett Laboratory, with more than 100 students from seven different London state schools taking part.

The Academy is run by Dr Simon Foster (Physics/TSM) and Dr Cecilia Johansson (Medicine), with much of the success being built upon the input of students and staff from TSM, who have generously given up a great deal of time and effort in mentoring and guiding the students taking part.

The Mayor’s Schools challenge is a competition organised by Imperial College London, JP Morgan and The London Mayor’s Office, open to London School students to come up with a solution to some of the most pressing challenges facing London in the future.

Dr Simon Foster from TSM was the keynote speaker at the launch event at the JP Morgan headquarters in Canary Wharf.

This year pupils from 12 London schools took part, with the final of the event occurring at the Science Museum. At the final the pupils present their solutions to a panel of judges made up of the student mentors along with staff and students from JP Morgan and Imperial College and TSM, with each member of the winning team receiving a tablet computer and a day out for the team.  In addition, members of the TSM took part in the STEM market place, where they discussed their research and undertook hands on demos with the students to give them a taste of the cutting edge science the department is undertaking. 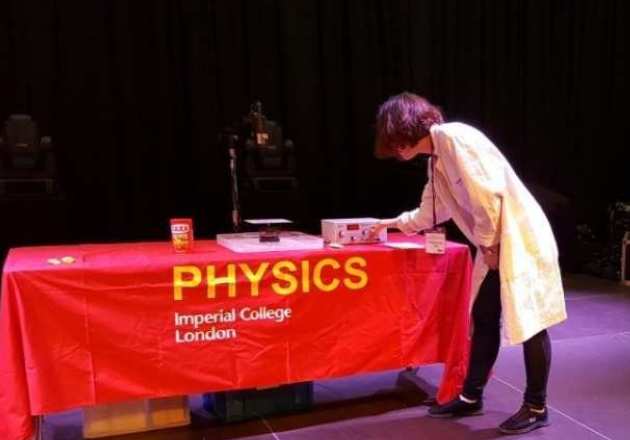 Prof Adrian Sutton and Dr Simon Foster helped organise the 1st Phoenix high school debate, centred on the subject of 'Is the UK government doing enough to combat climate change'. Prior to the debate various scientists visited the school to give talks about different aspects of climate change and its causes. Simon spoke about his research into solar variability and climate change, giving the participants an insight into the workings of our nearest star and its influence upon the Earth’s climate. Students used this information to prepare their arguments for the debate, at which Simon acted as one of the judges.