Advanced field theories hypothesise the existence of more than four dimensions, the extra dimensions described as compacted into unmeasurably small length scales. In our work on singular plasmonic structures1, we reported the phenomenon of hidden dimensionality in a simple plasmonic metasurface, which may be designed on graphene by spatially modulating its Fermi level with a grating profile, such that the charge carrier density is strongly suppressed at one point.

As opposed to conventional gratings, which are characterised by two wave vectors, this metasurface is effectively described by three, the extra wavevector being inherited from the hidden dimension and not fixed by the incident radiation. The presence of this extra degree of freedom implies that the necessary phase matching for the excitation of surface plasmons can be achieved for a broad frequency band, as opposed to a discrete set of resonances. As a result, the surface plasmon resonance frequencies are squashed into a continuum of modes, which can be efficiently coupled to incident radiation.

Transformation optics enabled us to elegantly illuminate the physics at play: we used a conformal map to relate a singular grating to a spectrally equivalent, translationally invariant slab, as shown in Fig 1. Conformally approaching the singular limit amounts, in the slab frame, to quantising the modes over a unit cell whose width tends to infinity, meaning that the Brillouin zone size is shrunk to zero, thus the resonance frequencies merge into a continuum.

This feature of singular gratings enables the design of strong broadband THz absorbers on atom-thick layers2, whose frequency may be tuned via the grating periodicity. Remarkably, these devices are able to excite a wealth of high order plasmons, achieving extreme subwavelength confinement of the incoming THz light, as shown in Fig 2. Our results promise to open a new direction in the current technological race towards the manipulation of THz radiation.

Fig 1: A translationally invariant slab (a) may be conformally mapped into a crescent-shaped cylinder (b), and a grating (c), which can be realised in graphene by modulating its Fermi level. In (a) the incident EM waves, once coupled to the electron liquid propagate along the surface towards infinity. Since infinities are then conformally mapped onto the singular points in the grating frame (c), these low conductivity points are able to concentrate enormous field intensities. 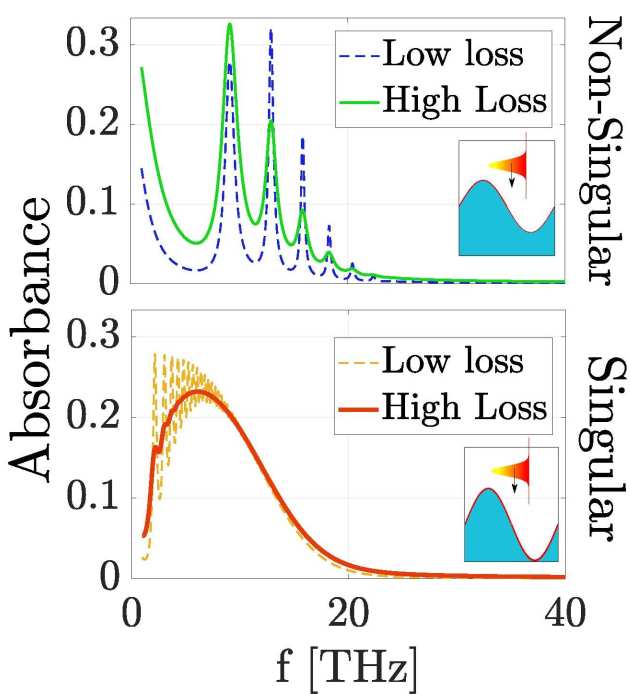 Fig2: The absorption spectrum for a conventional (top) and a singular (bottom) graphene conductivity grating. The singular metasurface can excite several more modes compared its non-singular counterpart, the spectrum merging into a continuum once the frequency spacing between modes becomes comparable to the resistive broadening.