I had the delight of spending ten days in Copenhagen at the end of October to take part in the final act of IPCC’s Fifth Assessment cycle.  Once again, around 130 country delegations gathered together to approve the Synthesis Report, going line-by-line through a 30-page document projected on to a screen, adjusting it in track changes over a five-day period. Well actually six days. All IPCC veterans boast of the arduous days and nights they spent deprived of sleep. I’ll get it over with, two nights till around 3:30 am and one till 6:30am eventually finishing at 5pm on the Saturday instead of 6pm on the Friday. 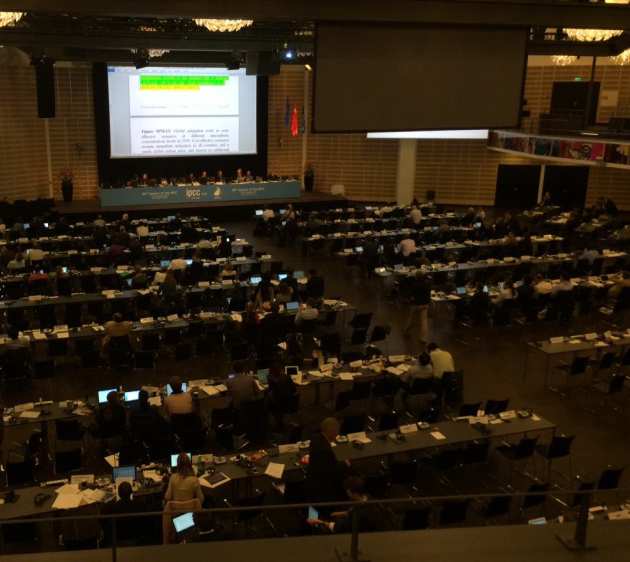 [Caption: Delegates hard at work. “Our delegation cannot support this semi-colon which is policy prescriptive”]

But to rewind – the authors started with a two-day prep session, fine-tuning the draft for the plenary session on the basis of comments previously received from government delegations. The great thing to report is that it was a really good gathering – clever people, fully cognisant of the intended audience and not a single prima donna in sight. Genuinely a pleasure to participate in.

And the Danes were extremely welcoming, perhaps to exorcise the ghost, not of Hamlet’s father, but of the 2009 Copenhagen Climate Conference conducted a few kilometers down the road at the Bella Centre. This meeting was at the Tivoli Hotel walking distance from the town centre. Our Danish hosts could therefore offer us (the authors, no governments) a dinner in the Hans Christian Anderson castle in the Tivoli Gardens and a reception in Copenhagen Town Hall. They made a big effort to tell the people Copenhagen we were there. Specially composed folk songs sung by children at the reception and an artistic assembly of ice brought specially from Greenland to melt symbolically outside the Town Hall. 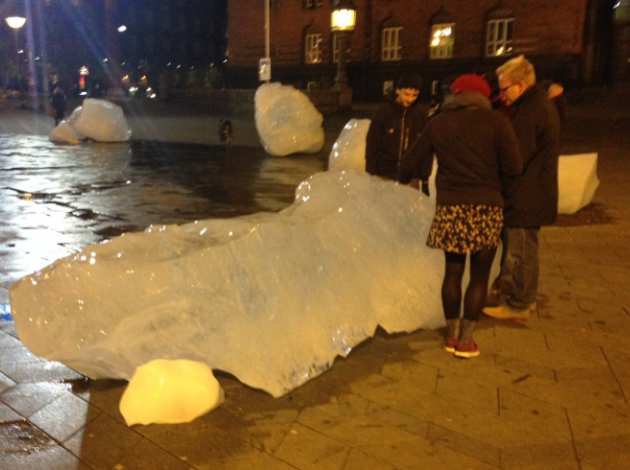 The session itself, inevitably, had its weary moments.  The points of contention were much as you might expect and pointed the ways towards issues to be addressed at the Lima Conference of the Parties (COP) taking place this December, and even more importantly, the Paris COP due to reach a comprehensive deal in late 2015. No point in going through all the details, but for those who want to dip into the Summary for Policymakers watch out for choice sentences upon which we may have lingered: “effective mitigation will not be achieved if individual agents advance their own interests independently; “mitigation policy could devalue fossil fuel assets and reduce revenues for fossil fuel exporters”; “cap and trade systems for GHGs have been established in a number of countries and regions. Their short‐run environmental effect has been limited as a result of loose caps or caps that have not proved to be constraining”.

A significant loss from the draft report was a two-page box interpreting Article 2 of the Climate Convention which refers to avoiding “dangerous anthropogenic interference” with the climate. Delegates could not reach an agreed version of this though my personal view is that several of the drafts would have worked and would have added to the power of the report. It was reported widely in the press that two counties, one from Latin America and one from the Middle East, were the main obstacles.   I was part of the side meetings that tried to thrash things out – the underlying problem was that countries could agree on all the statements that would fit into 4 pages, but had no hope of deciding which to leave out in a 2-page version. Since countries have been demanding shorter Synthesis Report in future there are new challenges…..

What of my own role? I was there as a Vice-Chair of Working Group III and Review Editor of the Synthesis Report. The latter means working as a policeman/social worker for the authors, helping them to ensure that all government comments on earlier drafts have been suitably responded to.  At the meeting, the task was to make sure that changes made in the line-by-line approval of the Summary for Policymakers were “trickled back” to the underlying report which was gavelled through page-by-page during the latter part of the meeting. 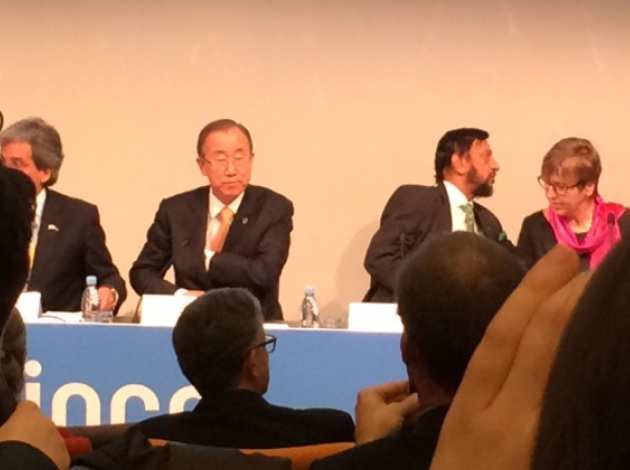 Once the report was tied up, the focus switched to communication. Signalling the importance of the report, the UN Secretary General Ban Ki-Moon spoke at the launch event/press conference, was clearly extremely well-informed and proved very effective at answering journalists’ questions. A few of us met him briefly before the launch and one colleague was not going to wash her hands after shaking his, in spite of the anti-Ebola handwash now on offer at all UN meetings. 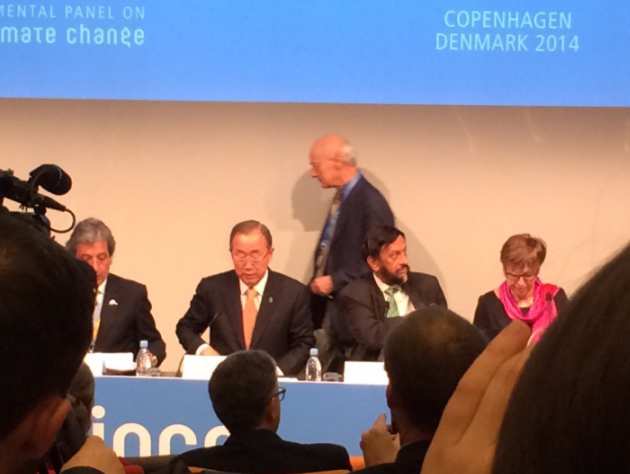 Following the launch, several of us went into a logistically challenging sessions with journalists both in person and in “huddles” with groups of journalists located in London and elsewhere. The coverage was good and broadly constructive, but if you buy me a drink I'll tell you how Emily Gosden of the Telegraph mischievously coaxed this headline out of one of the authors….

[Caption: Theatre of the absurd. Six policymakers in search of an author]

Finally, was it all worth it? Was there anything new to say? My view is that the novelty of the report lay in the confidence with which the key conclusions were stated.   “Human influence on the climate system is clear”. It also brought together the findings of the three Working Groups – science, impacts and adaptation, and mitigation – in a much more coherent and integrated way than ever before. The communication to wider audiences was exceptional, as was the media coverage, considering it had been preceded by three Working Group reports. But for the scientists, the deed is done for now. Whether a global climate deal is to be or not to be is up to the policymakers.