In a special lecture at Imperial, Kamel Ben Naceur from the International Energy Agency said that new technology is the key to living greener lives.

He believes that there are four ways to give people around the world access to the energy they need to live their lives and grow stronger national economies, without suffering the worst effects of climate change.

He told the audience of energy experts and academics that it is not necessary to sacrifice economic growth in order to clean up the energy supply, reduce air pollution and cut the number of early deaths from poor environmental conditions. His recommendations for governments around the world were clear:

Even using only existing technologies, the IEA predicts that a so-called 'Bridge scenario' (see below and side bar) could see greenhouse gas emissions peak by 2020, whilst economic growth continues unharmed. By 2030, emissions would then drop to almost 5 Gigatonnes (Gt) below the 37 Gt that has been predicted if nations stick to the levels outlined by their Intended Nationally Determined Contributions (INDCs) pledges submitted for the Paris Agreement. 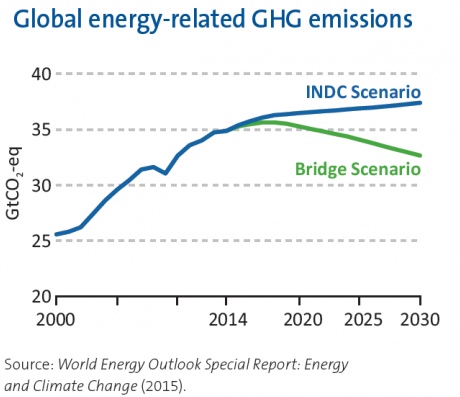 This was the sixth year that an audience at Imperial had the chance to hear about the World Energy Outlook and put questions to the IEA about its analysis.

Back in 2010, the UK was under the first year of the Conservative-Liberal Democrat coalition government, and Prime Minister David Cameron had pledged to make his 'the greenest government ever'.

IEA Chief Economist, Dr Fatih Birol presented for the first time what governments would need to do to limit average global warming to 2°C above pre-industrial levels, and tackle the growing problem of unequal access to energy causing political tensions.

The World Energy Outlook 2010 also put the spotlight on impacts for the oil markets; the critical role for China in the global energy landscape; the costs and benefits of increasing renewable energy, and the lack of access to electricity in sub-Saharan Africa and South Asia.

Following the United Nations Climate Change Conference (COP21) in 2015, the Paris Agreement has been signed and delivered thanks to the work of government negotiators and the UN body that governs international climate (UNFCCC), whose President, Christiana Figueres will be speaking at the Grantham Annual Lecture in April.

According to Ben Naceur, the onus is now on governments of the world to act on the promises they made in their pledges to reduce emissions. In the UK, carbon emissions fell by 4.3 per cent in 2015, the largest drop since the miners' strike in 1984, thanks to a further reduction in the amount of coal burnt for energy. There is also a strong sense of urgency to roll out low-carbon energy-generating and energy-efficiency technologies in developing world countries like China and India.

Professor Martin Siegert, Director of the Grantham Institute, said  “The World Energy Outlook sends a clear message to governments, businesses and the energy sector in the UK. I hope that Kamel Ben Naceur’s advice will encourage these sectors to support academic research into improving energy efficiency and enabling renewable energy to outpace fossil fuels."