Far from just messing about on the river, the Boat Club's success is down to putting in the hard yards

"New members often say we’re a bit different,” says Men’s Captain of Imperial College Boat Club, Milford Killian-Dawson (MSc Mechanical Engineering, Fourth Year). “We’ve got a diverse and welcoming culture. Whether you’ve never rowed before or have years of experience, people find their home here.” That supportive, welcoming atmosphere helped to keep the Society going throughout lockdown. “The hardest thing was not being able to be with your team members,” says Killian-Dawson. “That’s why I love rowing so much – the team aspect.”

And it’s also fostered a culture of excellence. This year, Imperial rowers brought home eight medals from the BUCS Regatta, the women’s team won the Cathy Cruickshank Trophy at the Henley Women’s Regatta the following week, and the men’s team made it to the final of the Henley Temple Challenge Cup for the first time in 20 years. 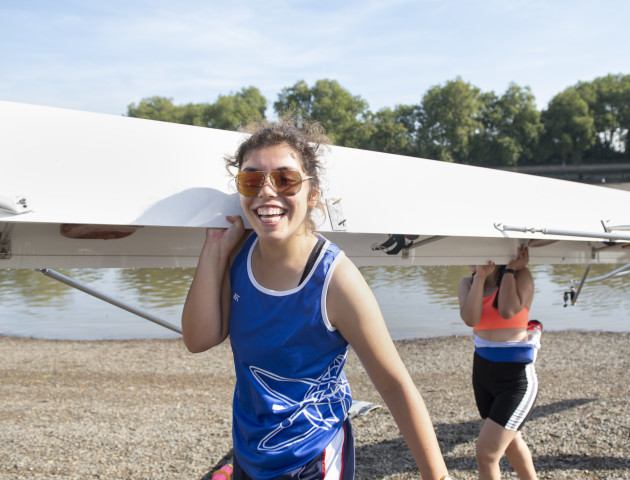 It’s just the latest in the Club’s long history of success. Decorating the walls of the Club’s iconic boathouse on Putney Embankment are photos of past crews, including previous winners of the Henley Royal Regatta, Henley Women’s Regatta and Head of the River Race. Founded in 1919, the Boat Club moved to its current boathouse, specially designed by the Club’s founder, Charles Bristow, in 1938. And in addition to all those wins, the Club’s athletes have won three Olympic gold medals and two silver medals.

“The Club definitely celebrates its history and its success,” says Adam Freeman-Pask (MSc Environmental Engineering 2008), who rowed with the Club throughout his time at Imperial. “When you’re down there, people will tell stories of different crews from different eras. You feel part of a strong history and want to contribute to that history of success.”

Freeman-Pask went on to do just that, being selected for Team GB at the London 2012 Olympic Games and winning silver and bronze medals in European and World Rowing Championships events in 2012 and 2013. “That step up in terms of what the Boat Club offered was a really vital period in my sporting career,” he says.

Melanie Wilson (Medicine 2015), who joined the Boat Club in 2009, the same year she made her GB Rowing Team debut, can relate. “To have that kind of back-up during the years when I was training full time in the national team was amazing, so I’m just really grateful,” she says. And it worked. Wilson competed in the London 2012 Olympics and won a historic silver medal in Rio in 2016.

Wilson is still a member of the Club today, squeezing in training alongside the demands of her career as a GP. “It’s exciting to see the students training. They visibly grow in confidence during their time at the club. The training is intense, but it becomes part of their social life as well. Committing to the training programme alongside studying is a challenge, but sets you up well for whatever you choose to move onto.”

And there’s always the romance of messing about on the river. “Watching the sun come up is one of those simple pleasures in life,” says Freeman-Pask, “but there’s something quite wonderful about doing that with a bunch of your mates in a rowing boat on the Thames. It’s all tranquil and quiet, before anyone else has got up – there’s a magic about it.”