You might not have heard of stochastic partial differential equations (SPDEs), but Fields Medal winner Professor Sir Martin Hairer’s work on them could help open the way to understanding the principle of universality. 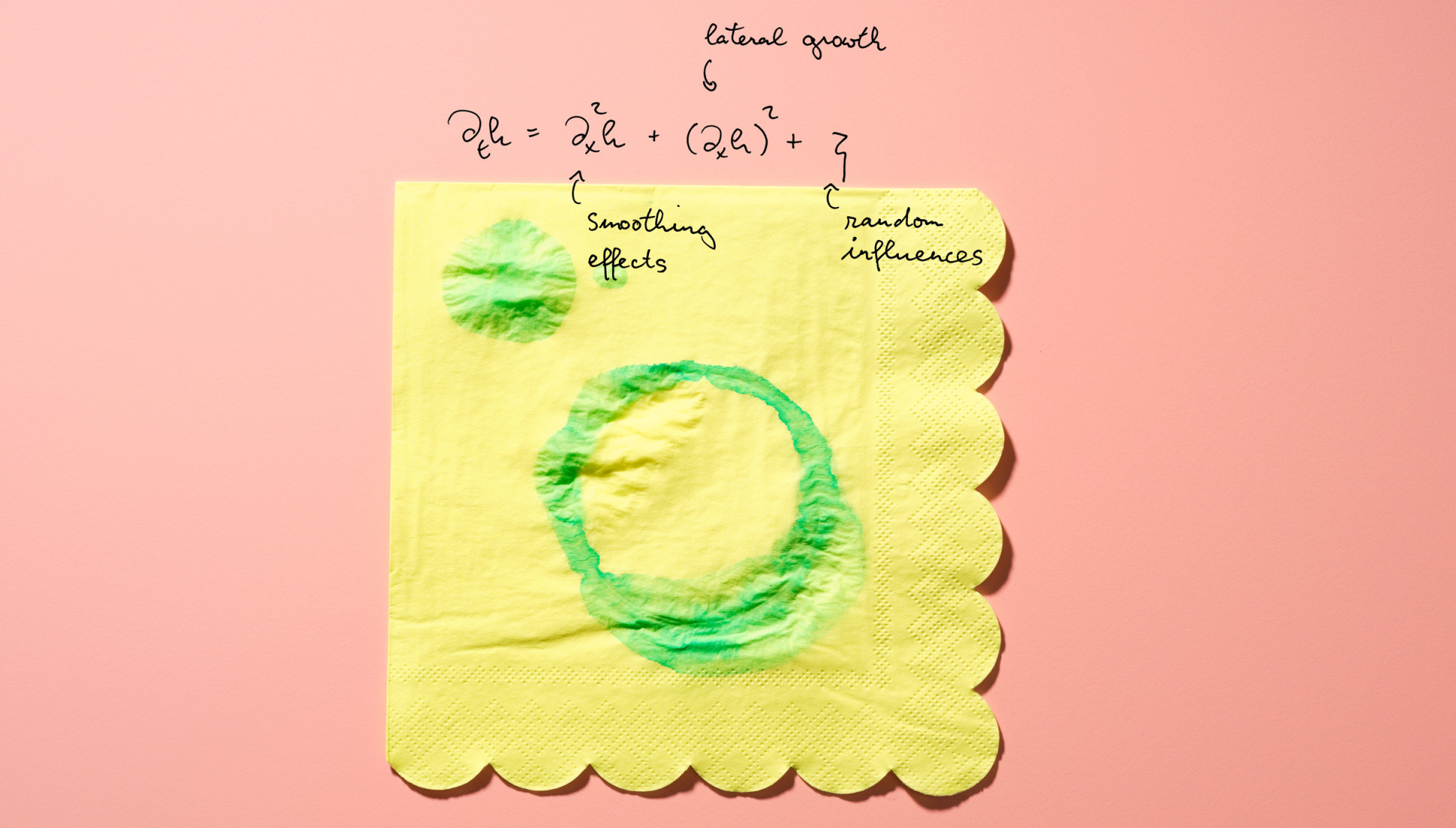 Physicists and other applied scientists have long been familiar with natural phenomena that are governed by non-linear PDEs. (That is, ones which don’t operate by simple proportions, such as those which rise exponentially.) But mathematically, these phenomena are staggeringly difficult to unpack because they involve nonlinear interactions between ‘distributions’ – for example, the distribution describing how the edge of a water droplet soaking through a napkin changes in time, and the distribution mapping how it changes in space. “Physicists are able to hold two models simultaneously in their head, one approximate and the other which knows that model is only approximate,” says Professor Sir Martin Hairer. “But as a mathematician, you want to understand what is actually going on.”

As a researcher, Hairer “stumbled into this area” of SPDEs with a senior collaborator, Andrew Stuart, about 15 years ago. “We had a joint project in which we knew there was an equation we wanted to write down, but we didn’t quite know what the equation was. If we closed our eyes, it popped out, then we could look at it and think, ‘What does this actually mean?’ That was sort of the starting point for my later work. For a while I had these ideas in the back of my head, but it wasn’t really going anywhere. I couldn’t find any cracks.”

As a mathematician, you want to understand what is actually going on."

Progress came in 2009, when Hairer had insights into how ideas put forward by peers Terry Lyons and Massimiliano Gubinelli might be applied to SPDEs. “They worked well where space is one-dimensional, where the interface is just a line. I had to figure out how it could apply to two- and three-dimensional situations.” Then in 2012 came a “very special” week-long workshop at the famed Oberwolfach Institute, set in the green hills of southern Germany, where Hairer presented his ideas to fellow experts. The initial crack had turned into a breach and, finally, a breakthrough.

“If you build some big, unusual structure, you use scaffolding to construct it. But eventually you take the scaffolding away and it stands on its own,” Hairer says of the effect of unveiling his final workings on SPDEs after years of exploration. “If that’s the first time another person sees the finished object, they might wonder how on Earth it got made, how it supports itself. It might seem a bit incredible. But the scaffolding is what makes it possible.”

Hairer’s work has been credited with opening the way to understanding the ‘principle of universality’, described by Hairer thus: “If you take different physical systems that somehow describe the same kind of situation, then at large scale they are described by the same laws.” He cites the example of a liquid crystal that has two phases, one stable and one metastable. If a line is zapped along the crystal with a laser, the energy converts it from the metastable to the stable phase. “The border of that line starts out straight,” says Hairer, “but it starts fluctuating as the stable phase invades the metastable. Some parts will convert faster, others slower.

Mathematics is like a hydra. You kill one head and three more grow"

“If you want to describe the law of these fluctuations, it shouldn’t depend on the fact that this is a liquid crystal. You could set a piece of paper burning and look at the motion of the smouldering front of flame, and you should see the same law. Large-scale behaviour that doesn’t depend on the detail of the underlying system – that’s the principle of universality.”

Time will tell whether Hairer’s SPDE breakthrough provides a key to unlocking this principle. But it will certainly have applications beyond its initial formulation. “Maths problems are not always super-specific,” says Hairer.

“Take the tools that Andrew Wiles developed to prove Fermat’s Last Theorem. They are original, powerful – and very useful for other things as well. Once you’ve developed the tools to do something specific, it is rare that that will be its only application. Whenever a new technique arises, it expands the list of possibilities that had previously been considered not doable.

“Mathematics is like a hydra,” he says with a grin. “You kill one head and three more grow. You solve one problem and realise it might now be possible to tackle many others. Mathematicians never run out of questions.”