We are delighted to have welcomed the below members of staff to our academic team in 2021. Our talented new crop of academics will ensure that our department remains at the forefront of research and teaching. 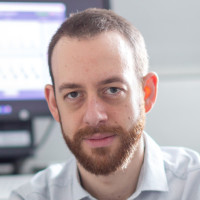 Dr Joseph van Batenburg-Sherwood is a Lecturer in the Department of Bioengineering at Imperial College London. His research is dedicated to solving problems and addressing unanswered questions related to biological flows, with particular focus on blood in microvessels, aqueous humour in the eye and air in the lungs.
Joseph has an MEng in Mechanical Engineering from King’s College London and a PhD in Biofluid Dynamics from University College London. He joined the Department of Bioengineering at Imperial in 2012 as a Post-Doctoral Research Associate in the lab of Prof Overby. Joseph became a Royal Academy of Engineering Research Fellow in 2017 and was appointed as a Lecturer in 2021.