The effective inertia and short-circuit level of the power transmission system in Great Britain would reduce significantly in future due to large proportion of non-synchronous generation. As a result, containing the grid frequency and voltage variations within permissible limits would be very challenging. Rapid response from loads could be crucial in such a situation to ensure secure operation of the system. In this project, we are investigating the availability of fast short-term power reserve (FSPR) from different types of loads to aid voltage regulation and/or collectively contribute to inertial and/or primary frequency control. Alongside the duty-cycle control of thermostatic loads (e.g. refrigerators), other non-critical voltage-sensitive loads (e.g. heaters, some lighting loads etc.) could be made to contribute to FSPR by decoupling them in clusters from the supply mains through part-rated power electronic interfaces. This way the voltage across such loads and hence, their power consumption, can be controlled over a much wider range in the short-term. Role of drive-controlled motors has also been considered for providing FSPR. 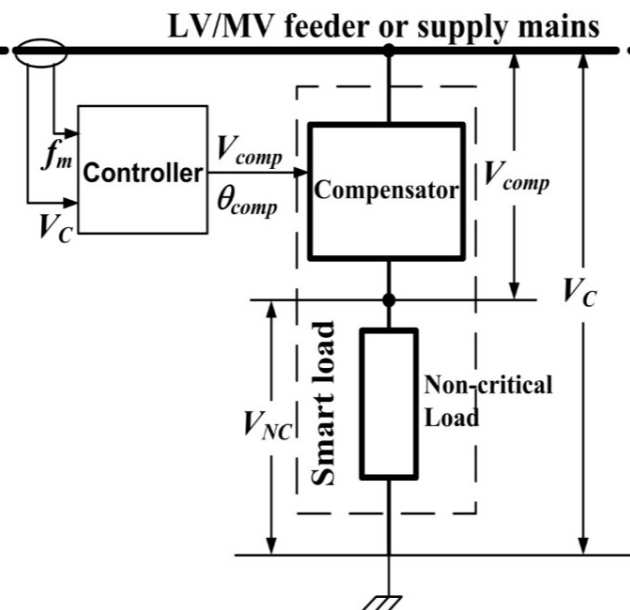 System studies and sensitivity analysis (in terms of load type and power factor, allowable voltage variation across non-critical loads, network strength etc.) have been carried out based on the following two approaches:

Smart load working principle has been experimentally verified using prototypes developed in the laboratory. A simple three node distribution network has been used along with two separate inverters to mimic upstream generation and intermittent renewable energy source. Results obtained from simulation of the same network correspond quite well with experimental values. Before proceeding with large network simulation detailed analysis has been carried out to estimate the PQ capabilities of the smart load with different power factors of non-critical load. Different control strategies have been explored to minimize the control effort in terms of compensator rating as a percentage of non-critical load. Performance comparison of several smart loads in a distribution network as opposed to a single STATCOM connected at an upstream node has been carried out using IEEE 13 bus test feeder. The results demonstrate the effectiveness of distributed voltage control in terms of lesser VAR requirement while maintaining a flat profile along a distribution feeder. Preliminary studies have been carried out in IEEE 37 bus test network to investigate the primary frequency control contribution from smart loads providing reactive compensation only.

Ongoing work is focusing on control of smart loads for regulating the mains voltage while collectively contributing to primary frequency control simultaneously. A combined transmission-distribution network simulation framework is being developed to make these studies more comprehensive and realistic.

Future work would explore possible improvement in angle stability with smart loads where decentralisation of the control structure and optimal allocation of control duties are more challenging than primary frequency control and voltage regulation which can be implemented locally.