Nicolas Moser is a PhD student supervised by Dr Pantelis Georgiou in the Centre for Bio-Inspired Technology, Circuits and Systems Group.  He completed the Analogue and Digital Integrated Circuit Design MSc in October 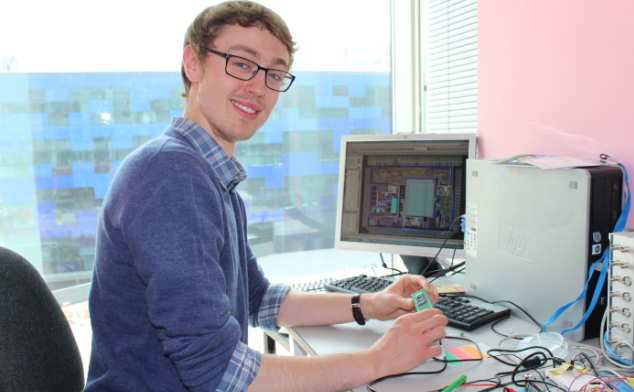 I did my undergraduate degree in Belgium and that was in general engineering, then after a year and a half we were able to specialise in two streams, and I chose electronics as the main one and then physics and chemistry as the second one. Usually in Belgium we would choose one of the two as a Masters, but I only did the three year Bachelor degree there and then I came to Imperial.

Why did you make that choice to come here and do an MSc?

I really wanted to go abroad and had lived in London before so was considering it for further studies.  I heard about Imperial from a lecturer at my university who did his Masters here some time ago, and so I applied.  I had a lot of questions as I wasn’t sure whether with my background in Belgium I could do the course or not, so I came to the Open Day and met with Professor Christos Papavassiliou.  He told me that ‘if physicists have done this course before, you can do it.’

So how did you find it when you got here and started studying?

I actually found my background really suitable. A lot of the modules started off exactly where my undergraduate ones had finished. Others overlapped, so there was some material I had learned already, but there were also modules that I hadn’t seen before. The fact that you can choose the modules made it easier, I knew which would be more difficult and I would have to catch up on, and others which would be better as I had seen a bit of the material or had the background already.

How did you find Imperial College as an MSc student?

Actually it’s a really good atmosphere. It’s very different from Belgium, the fact that the campus is a tiny part of the city of London.  You can get out really easily and live your life as a student a bit differently compared to a student in the countryside.  In Belgium the city was the campus, here the campus happens to be in the big city.  In the university all the clubs and societies are really good, there are many different interesting activities you can do as an MSc student.  The problem is it’s also difficult to handle your time, you need to know what you can do. It’s an intense year and the workload is quite significant, but the fact that you can choose options means that you can choose subjects that you are mostly motivated so there’s a bit of freedom there. There’s also a bit of freedom and flexibility once you have finished your exams to focus on your coursework.

Could you talk about the project you did for your MSc?

The project was interesting and also very challenging. In November we had to choose our projects, ranking our preferred ones.  I am lucky as I got my first choice with Dr Georgiou which I have continued with my PhD. I am working in a very interesting part of electronics. When I applied here in my cover letter I said I wanted to do some biomedical applications for electronics, and I now have found a PhD exactly in this area. I am designing circuits, which is exactly what I want to do as an electronics engineer, but then the application is towards DNA sequencing which to me was a completely different domain which electronics doesn’t necessarily reach. It’s really interesting to have this other type of application which makes you consider chemical sensors as interfaces to electronics, and other things you haven’t thought of before, and my background in chemistry helped as well, so it was a sort of perfect fit for the project. Every MSc project starts from ideas, you have to take the idea where you want it to go. You need to cope with at first both project and the courses, and so I was meeting my supervisor every week to figure out where I wanted to go with the idea, and explain my progress. It’s really good to have this follow up very week to have feedback, and then you jump straight into the project from June to September working 100% of the time on it.

Your supervisor is here to guide you, maybe to set milestones but they’re never going to get you stuck in a box as for MSc projects that’s not what it’s about. You go where you want to go.  Your supervisor also gives you opportunities, and I got the opportunity to fabricate a chip for real, and I started out my PhD started by testing this chip. It was such a great experience.

How have you found studying in London?

I come from the countryside, so just being able to take the tube or bus and go anywhere in a couple of minutes, meet people, go to the river and to the pubs with friends is great. There are a lot of things to do on the weekend, you don’t have to stay at home, there’s always Time Out and other websites which give you things to do.

Do you have an idea what you want to do after your PhD?

It’s a bit early, I always said when I started my masters I wasn’t sure I wanted to do a PhD, it wasn’t necessarily my first choice, but then I think it happens naturally.  I really got into my masters project and then it then became obvious I wanted to carry on with this work as a PhD student, so hopefully the same will happen at the end of the PhD.  So far it’s really interesting, challenging, motivating and I guess we will see how the 4th year goes and what I decide to do afterwards.