Large and rapid climatic changes have taken place during the Quaternary associated with glacial and interglacial cycles. The extent and thickness of the major high latitude ice sheets acts as a primary control on estimates of sea level changes and positions of shorelines during the Quaternary and are also used as a palaeodataset against which current global climate models are tested.The evidence for these climatic changes primarily comes from Antarctic and Arctic ice cores, ocean sediments and the glacial record on land. To-date there has been relatively little investigation of the signature of these rapid climate change events within offshore sedimentary sequences utilising the now extensive oil industry seismic reflection and bore hole datasets that exist for many sedimentary basins.

A wealth of commercial 3D seismic reflection data covers the North Sea basin with almost 'wall-to-wall' carpet coverage from north to the south along the basin axis covering 53°-63°N. Using these data, in combination with BGS well data and legacy high resolution 2D seismic data, our work has shown how industrial 3D seismic data can be used in the field of marine Quaternary Geology leading to important discoveries about the glaciations in the North Sea area, and a significant revision of the Quaternary glacial history of central North Sea area.

We have made several significant discoveries. For example on  3D seismic reflection data we have observed several features, including mega-scale-scale glacial lineations (Figure 1 above), that document the presence of grounded Quaternary ice sheets on the seabed/landsurface over a 160 km wide area between 56°-60° N (Fig1). Through this work we have shown that the British-Irish and Scandinavian icesheets were confluent in the North Sea during the last major glaciation between 29–22 14C ka BP (Graham et al 2007). Were were very lucky to be able to use from material recovered from the first BGS borehole drilled in Quaternary sediments in the UK sector of the North Sea in over 10 years  to provide a new chronology (with radiocarbon dating) and interpretation of depositional environment for the most recent glacial events in the central North Sea (Graham et al. 2010).  This work was done as part of a collaborative British Geological Survey-Imperial College project.

Our analysis of buried tunnel valleys, features carved beneath the ice by sub-glacial meltwaters (Fig 2), has allowed us for the first time to directly document  with geomorphic evidence the expansion of NW European ice sheets covering NW Europe at least seven times since the middle Pleistocene, inline with that observed from oceanic and Greenland/Antarctic palaeoclimate proxies. These results constrain reconstructions of the extent and limits of NW European ice-sheets in the last 460 Kyr which will inform future models of ice-sheet extents prior to the Last Glacial Maximum, in response to climate forcing. The paper summarising these results published on North Sea tunnel valleys by Stewart & Lonergan in Geology (March 2011) is available for download here.

in the Central North Sea as imaged on 3D seismic data; From Stewart et al (2013).

We have also looked in detail at the Moray Firth area to investigate how an icestream within the British-Irish ice sheet decayed after the Last Glacial Maximum (since c.21,000 yrs). In the last 10-13 years there has been  significant research effort on understanding the dynamics of ice sheets  and particularly how they decay, with the of  aim of predicting how the Greenland and Antarctic ice sheets may behave in response to global warming. Numerical models  predict rapid and dynamic oscillations of the British Isles ice sheet margins; in this work we demonstrate such behavior for the Moray Firth ice stream and document the landsystem assemblage that formed during icestream advance and retreat (Graham et al. 2009). 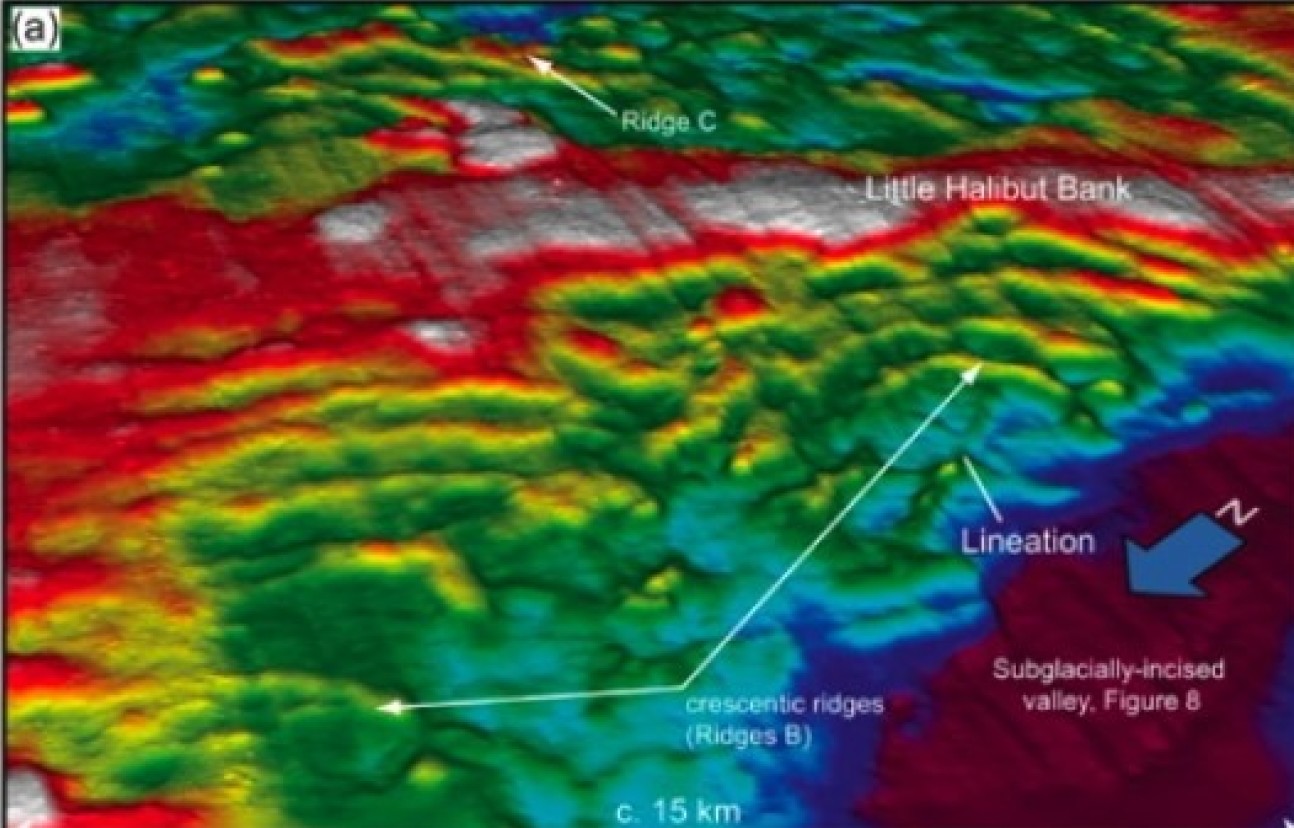