The project aims to construct a methodology for optimising distillation systems for heat recovery, and to minimise utility use. This is to be achieved via global optimisation of a flowsheet superstructure containing every possible stream and separator, and allowing the solver to determine which configuration results in the lowest additional energy requirements as utilities for the system. This will enable the selection of the minimum energy system, which in turn may offer cost benefits. By using a system of columns with an arbitrary sequence in the superstructure, many different configurations may be tested simultaneously, with the flowsheet generated consecutively with the heat exchange network. This combined solution to the problem removes the possibility of losing feasible and potentially optimal solutions to the separation problem that can occur when the flowsheet is determined before the heat exchange network. 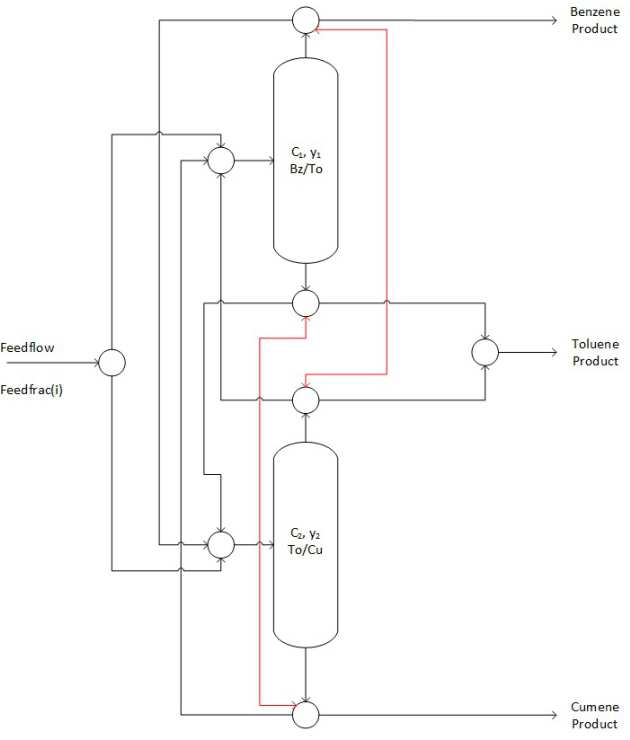 The most basic flowsheet on which to test this is the separation of a 3-component mixture via two distillation columns, with the example of a mixture of benzene, toluene and cumene shown in the diagram above. This problem has two specified distillation columns which carry out a predetermined separation between two adjacent key components, and with heat transfer possible in either direction between the condensers and reboilers depending on column pressurisation, there are four potential flowsheets possible. The aim is to develop a model in GAMS to fully optimise this system, and then to extend the model to allow the optimisation of systems with larger numbers of components, and eventually to extend the model to allow a more accurate representation of the system via non-equilibrium models. This will allow the accurate simulation of large, complex mixtures, with an eventual end goal of simulation and optimisation of the atmospheric crude oil distillation unit and also the olefin separation process, used to separate the lighter components from crude oil.

Thus far, calculations for the four possible configurations of this basic system have been made, showing the massive effect that the separation sequence and heat exchange network formation can have on the design. Based on some sample inputs, heat integration reduced utility requirements by up to 50%, while choosing a direct sequence for the separations gave energy savings of up to 20% when compared to an indirect sequence. By selecting which column to pressurise, hot utility usage can be reduced by a further 10%. What this illustrates is that by using careful systematic design of multicomponent separation systems, large gains in heat recovery and reductions in utility requirements can be made, in this instance corresponding to a 60% reduction in utility requirements from the base scenario.